So, as if day one and two weren't busy enough, we planned to go to Six Flags on Day 3. It was a little bit hot, but all in all not too bad. We left in the early afternoon around 11 or so and arrived a little after noon. We ate lunch in the car before heading into the park and then I pushed Dennis in the stroller while my mom took everyone else on the Trolly to the park entrance. Even though we have season passes, this place never gets old. The animals and the rides are such a fun combination, I think. My kids get to see something new each time we go. We still haven't caught all the shows at the park yet. 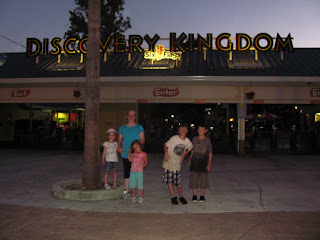 So this time the new show that we saw was the elephants. I don't think they have had the elephant show ever since I have gone. They have done elephant rides, but have never had the show and you could never walk over to their play area. I'm glad we ventured in that direction as we weren't purposely going that way. It was neat because they were about to start the show and they had to walk the elephant down the path that we were standing on. It walked right next to us....no fence or barrier between us. I wanted to reach out and touch it but was afraid I might startle it (though come to think of it I wonder if it would even feel a light touch). Anyways, that was kind of a neat thing to start off with. Dominic brought his friend Austin along and Sean was going to meet up with us after he got off work so they had to hang with us and were a little bit bored but even they said this was pretty cool. 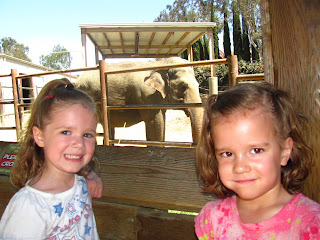 The elephant walked down into the water and laid down to take a bath. Penny had just asked me a few days previously how an elephant gets water in its trunk and sprays it out so far (the swimming pool we go to has an elephant spray structure and the water squirts out of its nose. She knows its fake, but she also knows that elephants can really do that so it got her thinking). It was fun to see and explain what the elephant does and why. 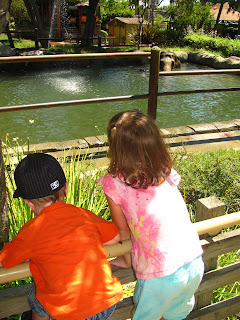 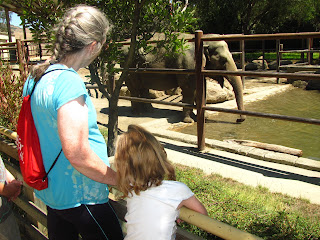 She sprayed and sprayed water. Penny was in awe (and so was I). What a fun treat for us to see. We didn't actually stay and watch the elephant show because the girls really wanted to go on some rides (and this day was for Brenna to have fun and do some rides really) and so we got moving, but I can't wait to go back and sit in and listen to the show. 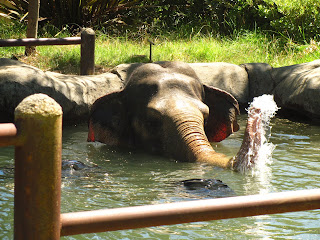 The boys waited patiently for dad to show up while the girls went on rides. 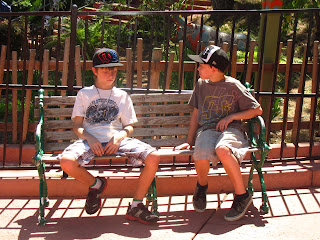 Michael and Gma got to go on some pretty neat rides too. 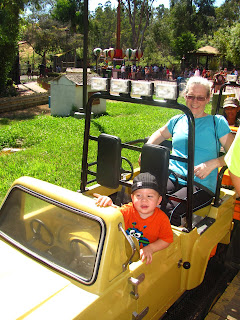 One of my favorite exhibits is the butterfly house. It is really hot and humid, but there are some of the most beautiful butterflies in here and they are EVERYWHERE. They have mirrors at the exit and you have to check yourself for butterflies before you leave. 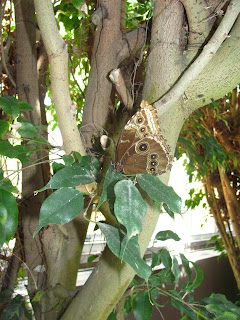 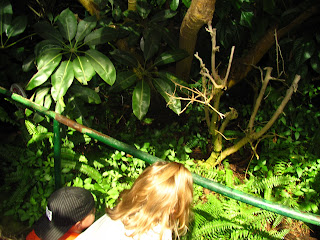 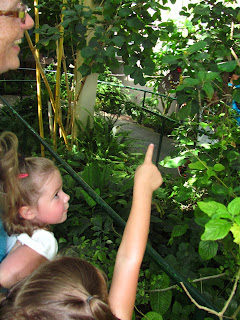 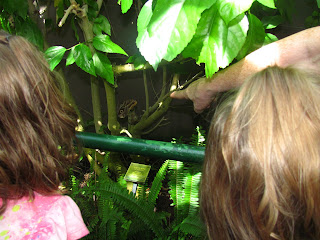 One of my and Dominic's favorite chips are the Kettle brand  Sea Salt and Vinegar chips. So yummy. I brought a bag and found out that Michael really likes them too....he also likes how his fingers taste after eating them. He had both hands in his mouth licking all the salt off his hands. 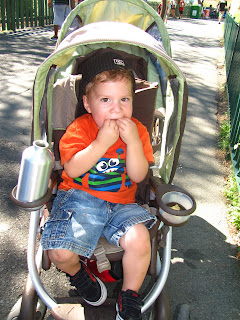 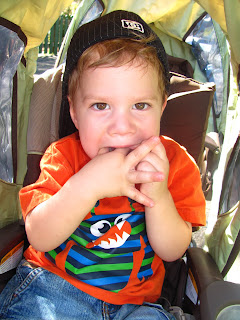 The shark exhibit is always cool because they have the flat escalator that goes through the shark tank and they swim over you. It really isn't dark, but since the flash went off it looks that way. 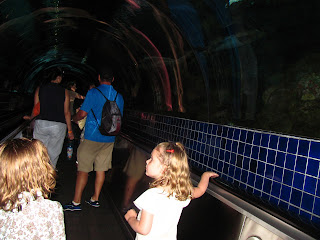 We had to go through this exhibit a few times because escalators are always fun. 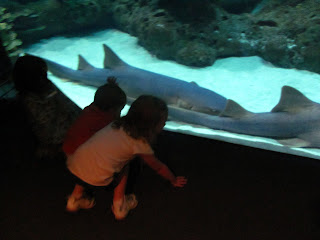 Train rides are awesome any day of the week. These girls were giddy with each ride and just wanted to go again and again and again. We had to convince them that there were other fun rides too. 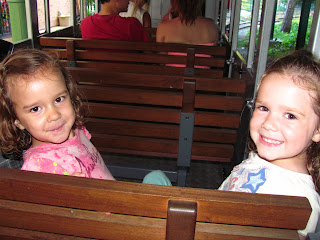 They did the swings probably 4 times. 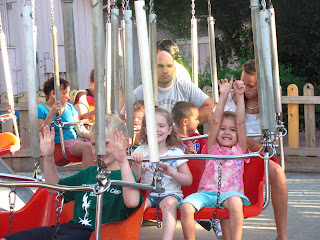 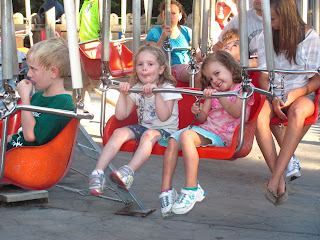 I love Brenna's hands in the air. 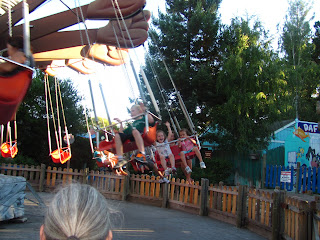 this guy was snug as a bug. 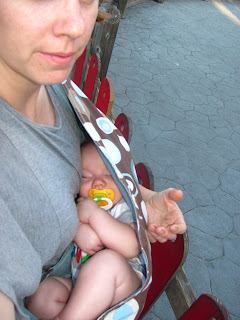 Dominic and Austin succumbed to the water structure. They got soaked and then rung out their shirts and let the sun dry them. Their shoes never dried out though.......which makes for a log day as your feel become huge raisins inside your shoe. They were pretty good sports about it though. I only heard complaining about it on the walk to the car when all was said and done. 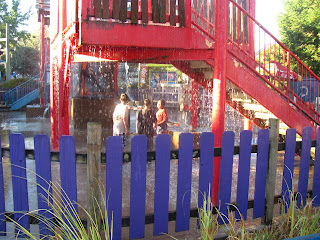 Found his thumb. I think this is the reason he has started sleeping through the night as of late. 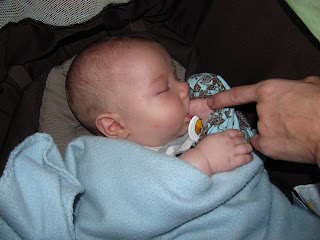 Poor Penny let Brenna sit in the pink booster seat and she just sat in the regular one (she things its a treat to sit in the one without the back on it).......this is why I purchased the one with the back on it, so that she would have a place for her head on long trips. Good thing brother was there to lean on. Poor thing. Look how tuckered out Brenna looks! We wore this girl out!!! 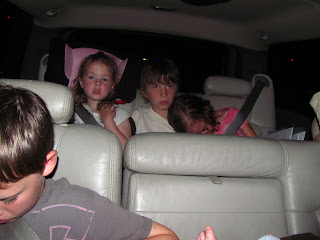 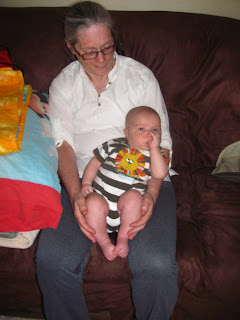 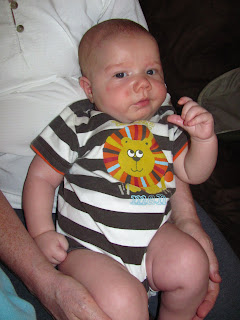 On DAY 4 we just chilled at the house. We went out in the morning to the local farmers market, but really we just relaxed at the house and let the kids play. Penny and Brenna played Just Dance Kids 2 a bit and had some good giggles about that. They were a little bit bossy with each other at times but mostly it was because they were tired. We wore them out over these 4 days and it started to show on day 4 but really, they had a great time on Wednesday playing outside, gathering flowers, playing polly pockets and reading books. 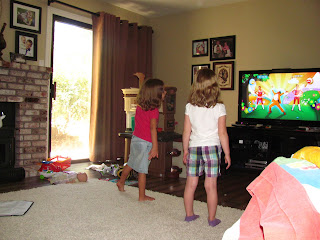 It was so fun to be able to have Brenna come along with Grandma for the visit. We can't wait till next summer when we go visit them!
Posted by Katie at 11:51 PM