Dennis has been promoted to tummy time in the last few weeks. I love seeing a little babies head bob up and down as they strengthen those neck muscles. His droopy cheeks and his little pug nose are toooooo much for me in these pictures. I just want to eat him. 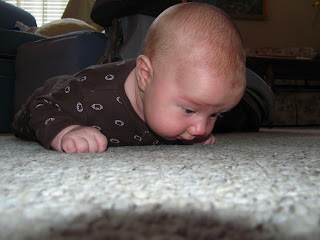 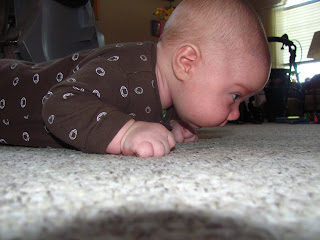 So, we spent the afternoon and early evening hanging out with GGma. She hasn't been feeling all that great lately as she just feels weak. She still walks on her treadmill and such everyday, but ever since she had pneumonia this last winter, she just hasn't felt the same. We try to see her a few times a week. It usually lifts her spirits and gives her some distraction to her day. My kids LOVE GGma. Time with her is limited as she is 97 this year and I just don't look forward to the day when we don't have her anymore. We just try to enjoy her to the fullest every day that she is still here. She is such a huge part of our weekly routine here and my kids light up to see her and she really lights up to see them. She always makes time for the kids. 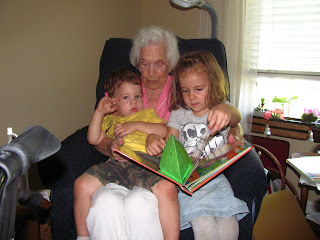 This is a game GGma used to play with Penny as a little toddler that made her giggle and giggle. Now GGma plays it with Michael and Penny joins in just because its still fun. They put a thimble on her finger  and then the kids yank it off again as GGma acts surprised and yells, "oooooooooooooh, you got my thimble!" They squeal in laughter. Can you see the game going on in this picture? I think this one is frame worthy. What life this woman leads. She has so much spunk left in her. 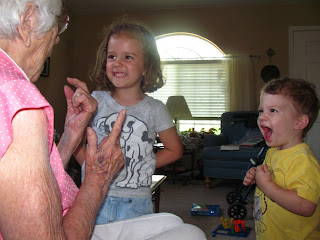 She really loves this chubby little Dennis and comments on his hair growing in at all the same rate and his eyes that are still blue. Will they stay? We don't know but I hope so....just like Dominic and GGma's eyes would be kinda fun. 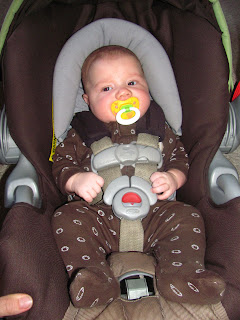 When we were getting in the car Penny told me she needed to run back inside and tell GGma something, so she did. What she told her was that she wanted her to come and wave to us as we drove away (something she does now and then but not as an everytime rule). I thought this was a really cute request as I remember my Grandparents waving to us each time we left their house and I remember LOVING seeing them waving as we drove away. I can still see it in my mind. So, I snapped a picture....another one to frame. I love this lady. 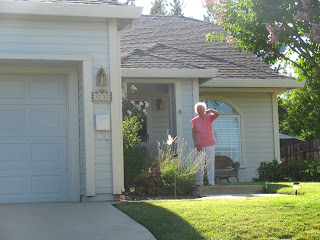