The morning of July 4th our ward had a breakfast, devotional and parade. It was the perfect way to start out our the day. Brother McIntyre gave a great introduction by speaking about the Declaration of Independence and encouraging everyone to read it that day. Also its divine inspiration that it has been for our country and the prayer that it will continue to be.

We had donuts/muffins and fruit.
And then on to decorating the bikes for the parade around the building. Michael was too tired and cranky to ride his 4 wheeler. Ever since he crashed down the little hill at the end of our driveway he hasn't wanted to ride it at all. Poor guy, that was like 4 months ago though. I'm wondering if he'll ever get over it.
Penny is still riding her glider bike. I think its due time to get her a bigger bike and teach her to ride.
I think she'll pick up on it easily because of this glider. She's loved it but its time to lower the seat and give it to Michael. 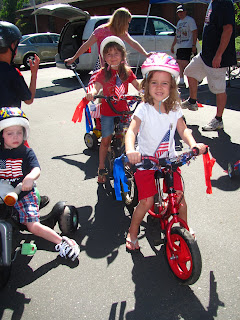 All the kids ready to go! 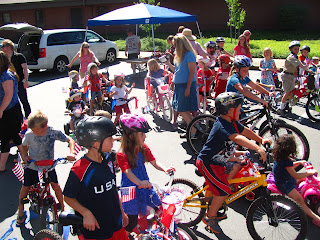 He played with a flag instead. A few days later he picked up this flag, waved it around and had a big smile on his face. I asked him what flag it was and his response was,
"It's God bless America"
Love it. 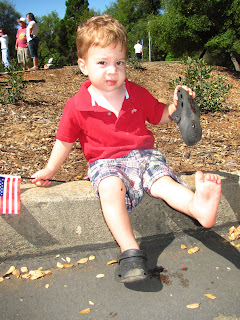 And here's the little Dennis all decked out for Independence Day.
I haven't posted many pictures of him lately because they are all of him doing the same thing, sitting in a chair, or swing or laying on the floor. He doesn't DO anything really but be cute. Except that  he's really started too smile a lot and talk now. So, more pictures will be coming. 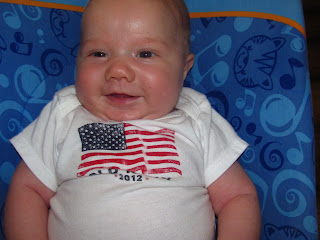 I love this little chubba. 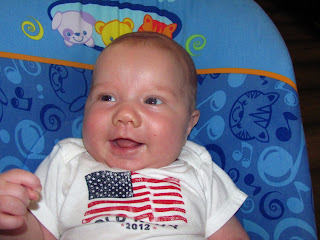 That baby is delicious!