There has been no shortage of silliness at our house. Penny has been an absolute joker (don't know where she gets that now do we Sean).
I laughed out loud when she came downstairs in Michael's snowsuit. 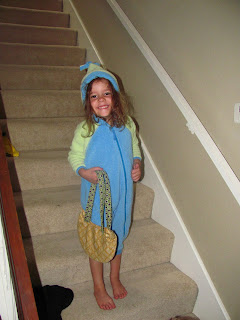 Catherine came over to play before they left for Utah and though it was kind of late (8pm), Sean decided to take them on an impromptu trip to McDonald's for an ice cream cone (the only thing we'll ever eat there anymore). These three could not have been more giddy about it. Pretty sure Sean won some brownie points with Catherine for that one. 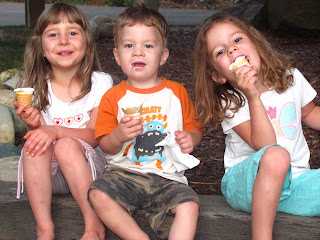 I used to let Dominic paint in the buff all the time when we lived at BYU. I had a large space on the lineoleum that we could lay newsprint out on and just let him make whatever mess he wanted (because it could all be wiped up easily). This house has never really afforded that luxury until I got our new floors installed and we had no white carpet to worry about! Michael and Penny had a hay day painting and making a mess. I see many more sessions of this coming up. 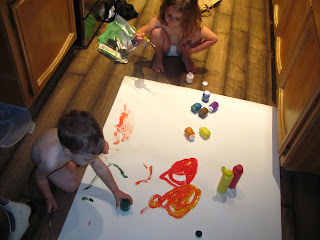 These two would not stop hovering over Dennis but he was cooing and talking to them so I'm pretty sure he was enjoying it. I love how much my kids love babies! 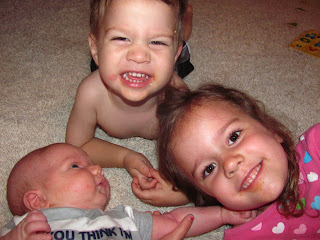 Games games games. These kids empty the game cupboard a few times a day (and with some redirection in the past few weeks have learned to put most of it away too thank goodness!). Topple has afforded some great learning for balance and fine motor skills. Penny also created patterns on the board too with different colors going in certain places. It was very cool to see what they came up with and the different ways that they found to play with this simple game (without ever actually playing the game).
If you have never played Topple, its quite fun but more age appropriate for 8 and older. 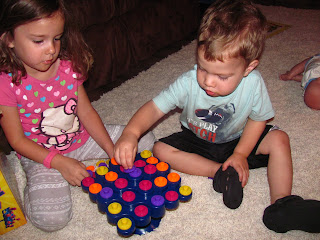 My kids love water and will drink plenty throughout the day, especially when I offer a straw. 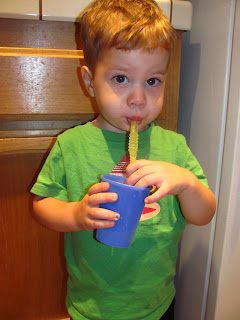 I had a Michael's coupon and found a great face painting kid with normal colors (we have a kit with pastel colors only) and so we had to do some face painting on Fathers Day (only to be wiped off 2 hours later so we could go to church). Penny loved that this kit came with glitter too. 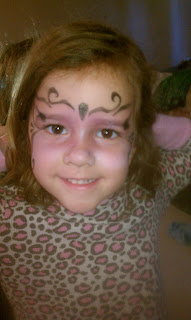 So then she and Stella painted Daddy's face. What a sport he is, always. 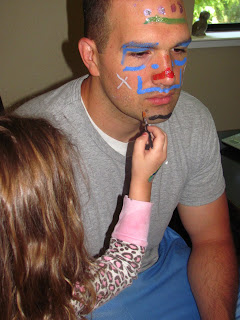 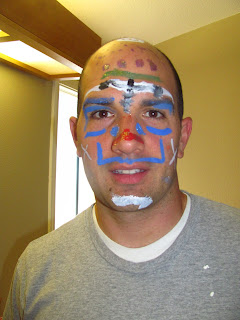 note the smiley face in white on top. The girls were pretty giggly about that one. 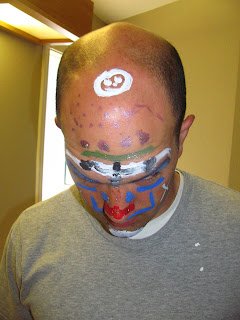 I love that they painted Sean's face, and that he LET them. :)

What a good sport...Good Daddy!
Reminds me of that Mormonad where the bowling buddies come to pick up the dad and he has clips in his hair and painted fingernails from his girls. You'll have to watch that.