I took way too long to upload pictures from the camera. I got too consumed in just enjoying the moments with my child that I didn't run to grab the camera every time he did something cute and the camera, over time, got forgotten. I may regret that a little bit, but I did get some pretty cute ones in the few times I pulled it out. I'll try to go in order:

Here Dennis is at 2 weeks old, to the day. He still has his umbilical cord attached and it won't fall off until the day after this picture was taken. What a handsome little profile he has! 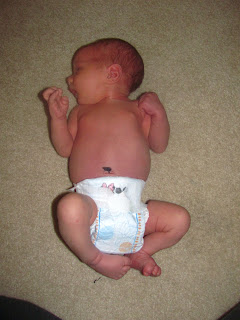 I love those skinny little arms. Dennis hates  to have his diaper changed, but he definitely lets me know when he's poopy. He really is my only child that doesn't like the cold wipes and if I had a changing STATION I would probably invest in a wipes warmer even though I feel that those are silly. 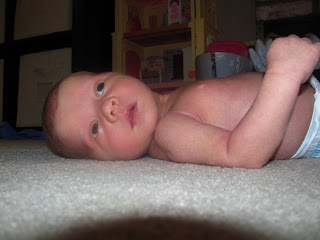 This little newborn onsie I made when Michael wasn't quite a newborn anymore and was immediately tight on Michael. Its nice to see it baggy on Dennis, at least for a little while.
I love his profile. 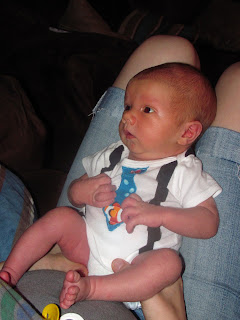 Michael loves biscuits and I finally  FINALLY perfected my mom's recipe (she's given me instructions I don't know how many times but they never turned out like hers). I always blamed it on my oven and I have to say that was part of it but mostly I didn't realize that biscuit dough still needs to be sticky and messy before you roll it out and that is why you use tons of flour when you roll it out (so it doesn't stick to the surface or to the rolling pin). I always tried to have it be more like bread dough, not sticky so you could roll it out and that created flat and not-so-yummy biscuits.
My new oven is dreamy though and Michael likes that it has a light so he can watch his goodies bake. 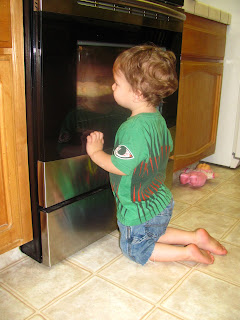 I bought Dominic a DC hat for his birthday only, it was too small (and unreturnable because of where I bought it). It has now become the younger sibling hat. Suitable even for the newborn. 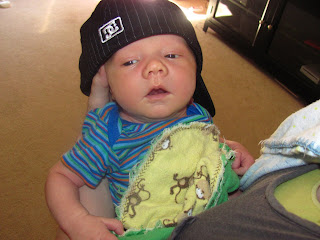 I got angry at video games one particular week and went on strike and didn't let my kids play even if they had "nothing else to do." I felt like the nazi mom making her kids play with toys but after a few days of it I found that the creativity in my children returned and wonderful things like cardboard keyboards, robots and swords were made.

After a day like this, its hard for Dominic and Penny to argue that video games don't make the brain lazy. 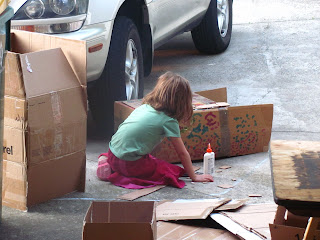 See all that gluing and cutting goin on? 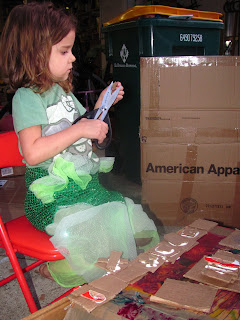 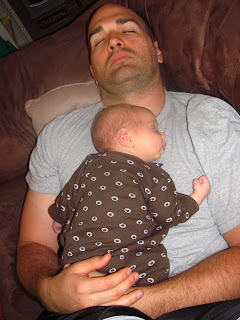 Dominic and Daddy fight over who gets to hold the babies in our house all the time. Its nice to have so many willing hands. 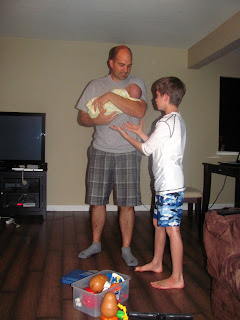 I did not anticipate how the new floors downstairs  in our house would make it
SO MUCH LOUDER
We got a huge area rug to help with that but I had to laugh that we tore out the carpet/linoleum and tile only to then put a rug down.

This flooring is amazingly beautiful (I think).
Its laminate planks made to look like wood. Its supposed to be extremely durable. We've had a few chips in a few of the planks after the first couple of days and we're hoping that they were just flukes and that we don't have to go through the process of getting a refund and re-do the floors again....but I will if they don't hold up! I do love the floor though and it makes our downstairs look sooooo much better than before. I'll do another post on it later when the trim and bathroom are finished. 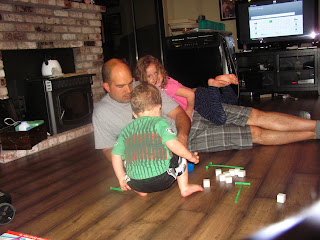 Dominic loves holding this guy. He said the other day, "you and Dad make the cutest babies ever. You should make more." 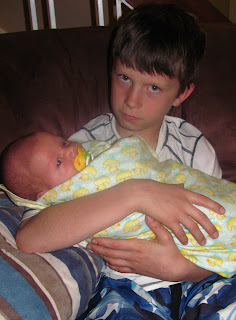 I could eat this picture of Michael. He's a little bit whimpy about the water (compared to how Penny was) but lately has become more adventurous. He actually enjoys the pool this year while last year he really would rather have just sat in a chair. 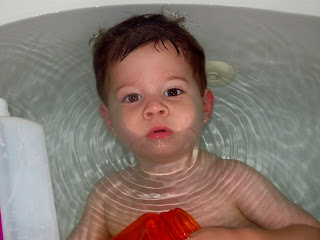 Hi Dennis. You're getting chubby. He's exactly one month old in this picture. 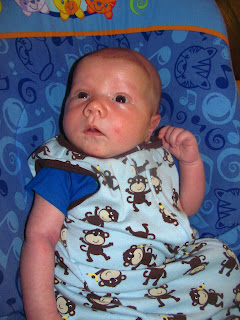 Starting to smile a lot at about 4 weeks. He sleeps for his 3-4 hour stretches and then wakes up happy as a clam and ready to interact, smile and coo. 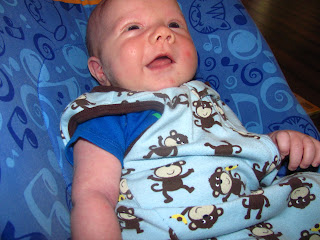 The night before Dominic left for Alaska he stayed up with me and watched an episode of Hoarders (we love that show!). He only made it halfway through the show before he fell asleep holding Dennis who was already asleep. So cute. 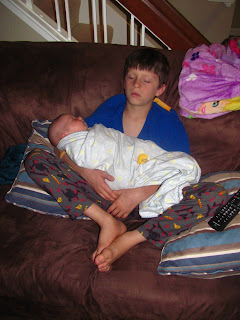 So many things about this picture just make me happy. He really didn't want to put him down because he wasn't going to see him for 9 weeks. Basically Dennis will be 3 times his age when he gets back. 3 TIMES!! Sweet, sweet Dominic just wanted to freeze time. Taking a picture was the best I could do. 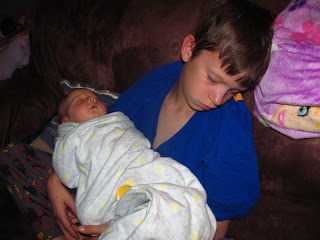 Ha! this pose of Penny and Dennis just makes me laugh. 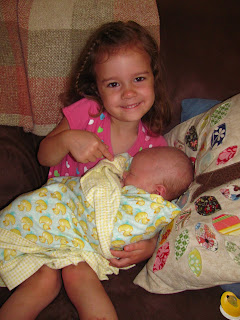 Dennis is Penny's little clone. We could just hold him up and insert him into the picture. 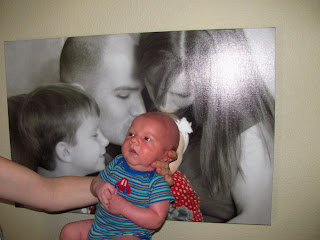 Do you see the resemblance? He is actually 1 month and 1 day old in this picture.....the same Penny was when it was taken. 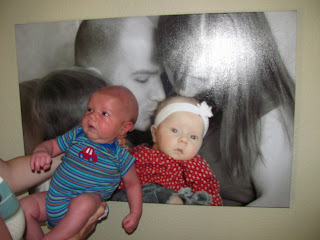 And now he's almost 6 weeks old and getting some serious cheek and chin chub (say that 5 times fast). 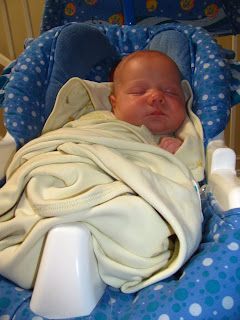 His body is still pretty long and lean, but those cheeks.....ooooooooh the cheeks. They are delicious. 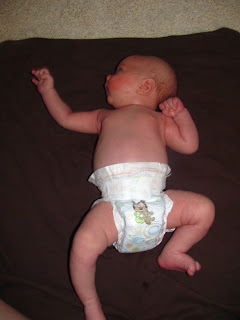 He has been fussy, like clockwork, towards bedtime. When its time to get everyone ready for bed that is Dennis' cue to be fussy and inconsolable. We're hoping that this stage doesn't last very long because he's an angel every other time of day/night. But this is the main reason why I haven't blogged in weeks and weeks. That is normally the time I blog, after everyone goes to bed. BUT, all he wants is Mommy to come to bed with him. He's getting a little better, tonight I rubbed lavender oil on his feet and that seemed to help a little. We shall see, if you see an upswing in night-time blog entries, you can assume that his fussy time has dissipated. Otherwise, any other suggestions are welcome (we've also tried gripe water which kind of maybe helped).
Posted by Katie at 12:01 AM

he's growing so fast. I see some chunky thighs building up. :)