This is what we've been up to while we wait for this baby to arrive.
That's right, no baby yet....

Whenever Michael finds paper bags he puts them on his head and calls them costumes. This time I thought I'd be a good mom and cut holes for him so he could see out of it and put his arms through. Penny thought that looked fun and followed suit. 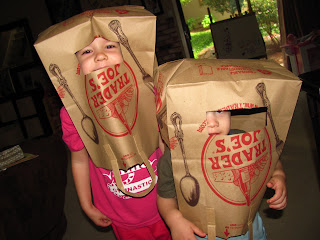 Tree pollen in the last few weeks has triggered awful allergic reactions in Penny. Her eyes get very puffy and red and she can't stop itching them. Benadryl has helped but what we discovered this year is antihistamine eye drops. Those seem to work best to keep the itchy eyes at bay. It has calmed back down this week and she hasn't had to have either medicine. Poor girl hates the allergy season. I do too now.

Funny story: We stopped at a friends house in Valencia and Penny seemed to be allergic to their dog. That was a first for us. Her eyes turned red and she was itching them constantly. We stayed for only an hour and then left and when we left, her eyes were so much better. It couldn't have been pollen as it was pouring rain outside. Fast forward to a week later when her friends came over. They were all playing outside and it was the first day we'd been home and the pollen count was very VERY high. She itched and itched and itched her eyes and then came running to me almost in tears exclaiming, "Mom! My eyes are itching. I think I'm allergic to my friends and now I won't be able to play with them anymore!"
Poor sweet girl. I put her straight and showed her the pollen all over EVERYTHING and she was calmed, came inside and played with her friends inside instead of out.
She was so relieved that it was the pollen and not her friends. We giggled about it later in the evening and she saw the humor in what she said. 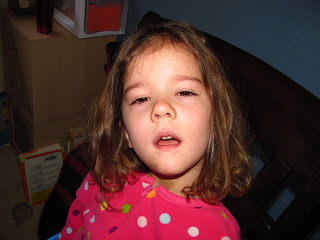 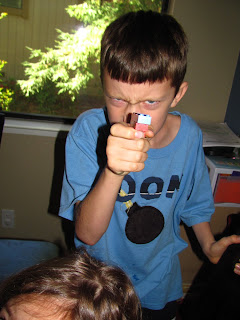 Penny and Michael colored their bags after they wore them for a while. 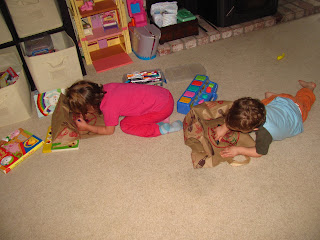 This is Penny's thinking face. She got some new school books for next year but wanted to dive right into them. Go for it girler. She loves school. 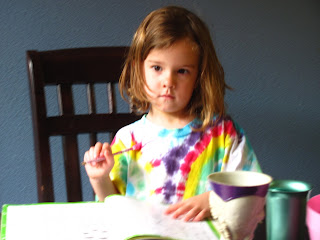 Her outfits are definitely original. I love Michael in the background with his backpack on. I bought that backpack for Dominic when he was 1.5. 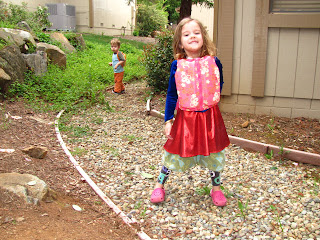 Love that grin! He loves to follow the "girls" around outside. 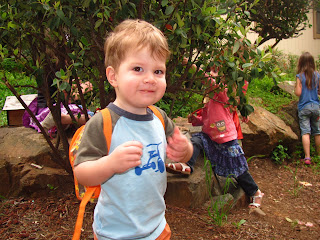 She was pretending to be Swiper from Dora the Explorer.

Can I tell you how much I don't like that show? Its educational to an extent except THAT THEY ARE ALWAYS SPEAKING VERY LOUDLY.  I feel like writing a letter to the producers and asking them if they have every heard of the phrase: inside voice. And also asking if they would fire the person who thought of telling the kids to say the answers louder and louder. Penny has learned to ignore the "louder" cues and just repeat the answer. It tooks weeks for me to figure out why her speaking decible had increased 10 fold. Once I pinpointed it, it wasn't hard to fix but the show almost got thrown out the window in the process. She's happy that she still gets to watch it, I'm happy that she's learned to speak quietly again. 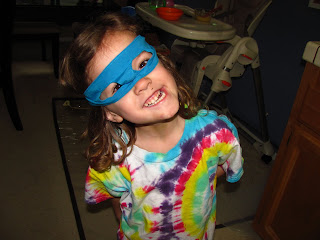 I'm not sure what this was all about. Silly. 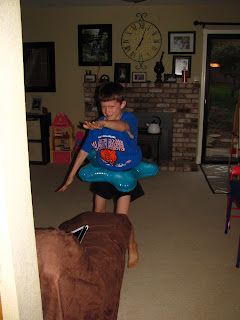 I gave Michael a haircut around the sides about 3 months ago (maybe 2) and it has now started to get quite long on the top. This has also brought out curls! They are always the best right after a nap when he gets a little sweaty. He looks so much like Sean as a toddler in these pictures. 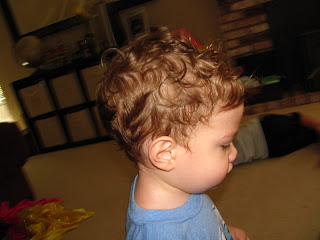 Is that not the perfect hair? 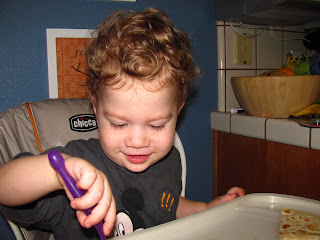 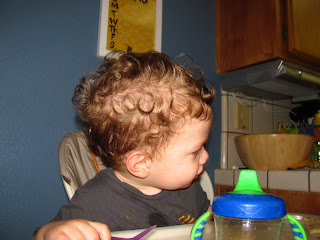 Michael had learned to build his own train track. He usually needs a little guidance to make it meet the other end of the track, but he likes to put each piece together. Its like a puzzle that you get to play with when you're done and Michael  LOVES puzzles. 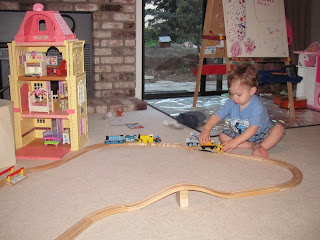 Penny loves the trains too. I tell you what, Wooden train sets are an expensive start up, but man they are worth every penny if you hang onto them and have multiple kids. They NEVER break. 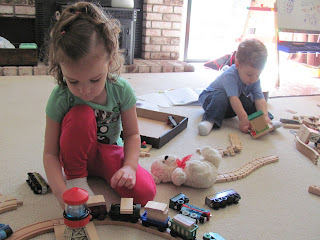 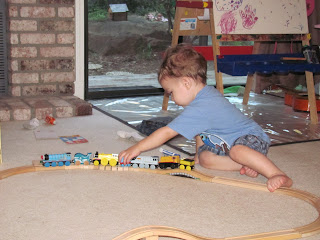 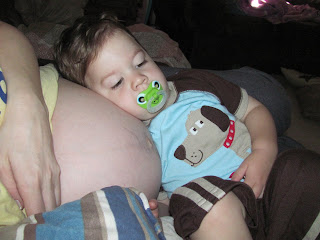 Dominic and Davis laughed when I started to put water in this pool and both of them said, "we're not playing in that pool mom. Its a baby pool." To which I replied, "I know, I'm filling it partway up for Michael and Penny. You guys can play something else."

Guess who played with the pool the most? 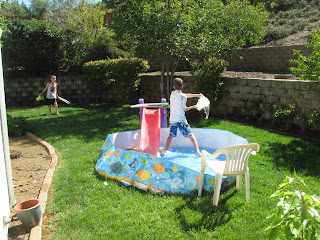 No shortage of fun on this hot Saturday at Gma's house. 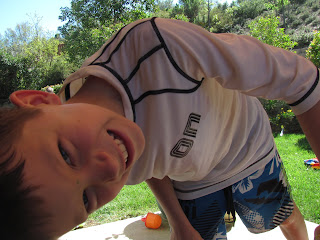 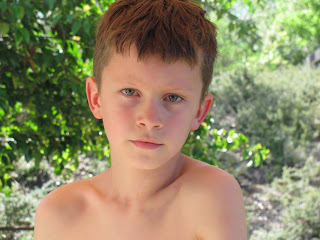 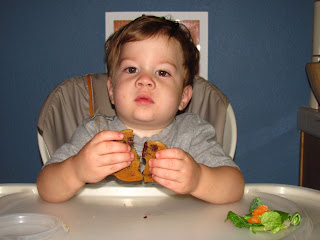 when dunked in milk. He won't eat them any other way. 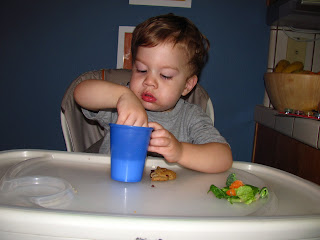 Penny was making a silly face and Dominic joined in behind her...only, by the time the camera shot the pictures, she was on to picking her nose with both fingers (or scratching probably). I had to laugh at the candid picture. 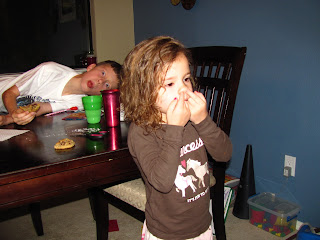 Dominic made a campfire for the kids to eat berries and get warm around on a kinda chilly night. So creative and funny. They loved it. 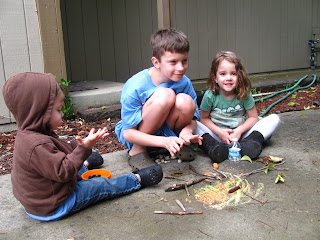 Don't get your fingers too close! 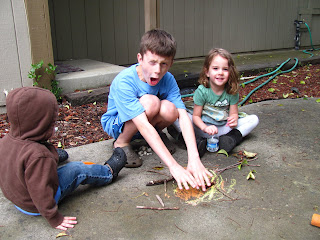 Michael laughing at a compilation of treadmill bloopers. Its his favorite youtube video. Sean's mom is in town for the week. Really, she was here to help out when the baby comes. She leaves on Saturday......only its Monday and there is still no baby. I sure hope the baby comes soon so she can have some time before she has to leave. In the meantime, she's a gem and is painting my doors (we never finished painting the doors for the whole house or the trim in my bedroom). So nice to be getting it done. Thank you, thank you! 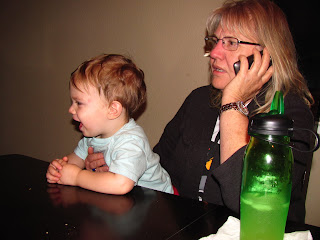 Mr Potato Head is a constant playmate at our house. I recently learned that back in the day, Mr Potato Head was only the parts and pieces and that you actually put those pieces into a real potato? They didn't supply you with a fake one. What a mess, but what fun. I think I'm going to have to buy some big Idaho spuds and let my kids give it a try. 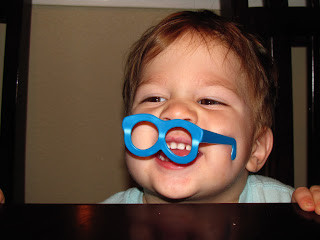 Michael kept saying this crocodile was a hippopotamus but by the time I got the camera out, he learned it was a crocodile.

Just checking to see if you've had that baby. :)

I'm stalking your blog (or is it stocking). Hopefully you're at the hospital right now! Can't wait to see him/her. Micheal's curls are heavenly! So cute!

All of a sudden Micheal has a lot of hair. Sorry about Penny's allergies. As much as we look forward to spring every year, at the same time you dread those pesky allergies.