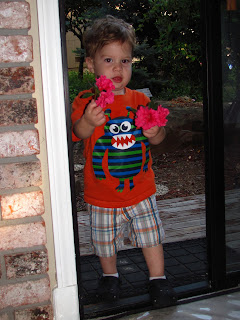 Penny and Michael and Dominic went out and picked a few Azalea's the other night on the back side of our house. Dominic took one to a neighbor. He loves spoiling our neighbors. Penny and Michael brought one in to mom, Grandma and Great Grandma. I love these two pictures. 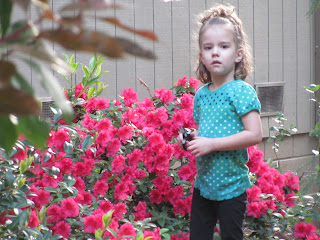 Penny Grandma got a Dora Puzzle at the store for Michael and Penny. Michael did it over and over and over and over. Penny did it with him quite a few times, but could hardly get a piece in with Michael in the way. They were pretty good about sharing them though. 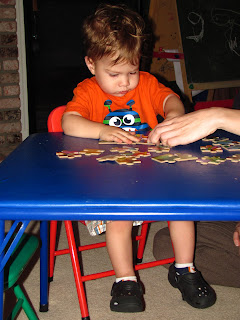 Michael's legs don't touch the ground when he's sitting in these chairs (of which he insists on having a red one). We got these croks from my Brother as hand-me-downs from Owen. Seriously, if I knew that Michael was going to be so in love with them I would have bought him a pair a long time ago. So grateful for hand-me-downs though. I don't think I've had to buy clothes for Michael since he was born or for Penny in the last 3 years. Such a blessing. 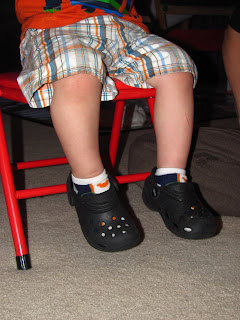 Grandma decided that since the baby hadn't come yet, that she would work around the house and paint the rest of our doors (something I'm obviously not going to get to if I haven't in the last almost 3 years). What a gem. She painted 7 doors while she was here and the paint we had was horrible, they all needed 4 coats of paint. I'm not sure why the paint was horrible, it just was. We won't be buying Behr Premium paint ever again (after we got started I remembered why I hadn't finished painting the doors in the last 3 years.......and that was one reason). Penny kept grandma company just chatting and chatting and chatting. At first she was just standing there talking to her and then politely said, "Gosh Grandma, it sure would be nice if I could get a chair out of that closet you are painting right now but its all wet." Grandma took the hint and got her a chair. Penny sat there for over an hour talking to her. 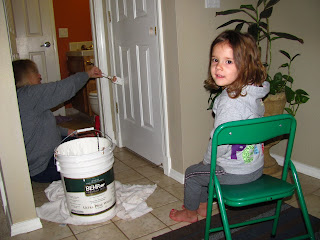 This is such a typical Penny pose. 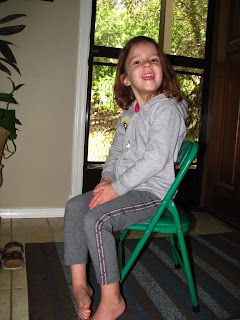 Sunday morning turns our house into a huge pile of different toys on the floor. Taken from the other direction it would have probably looked much worse even as there were tons more up against the small couch as well as in the kids kitchen area. 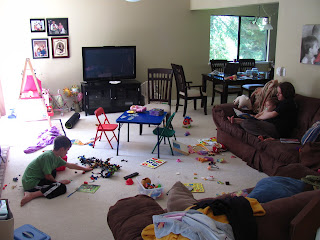 While going through baby clothes, we came across an old Halloween costume of Penny's. When she was almost 1, she was a Penny. She wore this all night long. I love that smile. 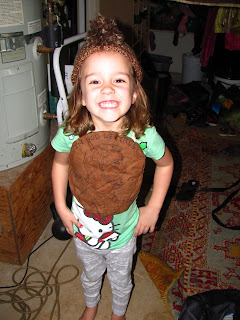 Penny helped me find a girls outfit in case its a girl (which she insists she knows it is). 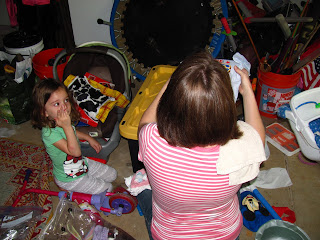 Mommy sandwich. Michael and Penny were so snugly this particular morning that I told Dominic he really needed to take a picture of us. 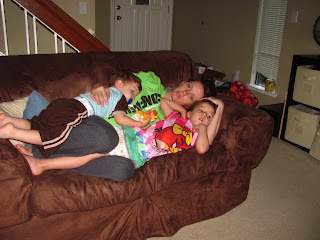 Alright baby, I set this crib up 4 days ago. Lets get this show on the road. 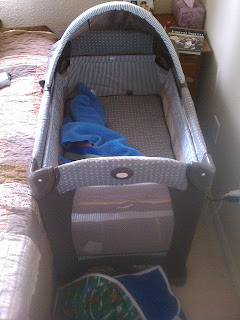 Last night, full full FULL moon, I had a handful of strong contractions but they were all over an hour apart. I'm hoping that those continue and start to get closer together. Since I've gotten out of bed in the last hour though, I haven't had a single one so we'll see where this leads. So far, this is proving to be very different than any of my other births in that I've been having noticable Braxton Hics for over 2 weeks and strong contractions, far apart, for about the last 8 hours. Penny and Dominic's labors were kinda drawn out over 24 hours starting far apart like this, but the contractions weren't this strong in the beginning stages. Michael's, from start to finish was 4.5 hours. What's this story going to be?
I don't know, but I'd like to be able to tell the story soon.