I love this picture of Penny. The lighting is perfect. She sure has gotten good at coloring in the last few months. Where she was really good at coloring inside the lines and what not, she's actually started to grasp color concepts and where different colors should go. She really really likes her color by number coloring book and I think that is where she learned how different lines come together to make a whole picture and how colors can correlate to the same (like an arm, neck, and face are the same color but may not all be right next to eachother). Its been fun to see her coloring transform. 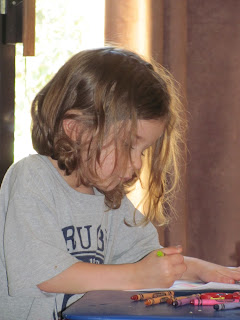 April Fools! Penny and I played a little trick on Daddy. He didn't even notice and only found out because Penny could not contain the secret anymore and told him about the black box on the back of his head. 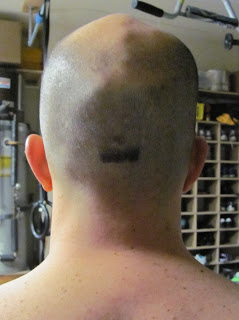 Michael likes to find his pockets. I think its one of the cutest things ever to see him walking around the house with his hands in his pockets (because I know the work it took to get those chubby little hands in there). Sorry, Grandpa Williams. My mom's dad would not let us stand around with our hands in our pockets. He found it rude and meant that you were bored and needed something to do. He would quickly give us something to do if he found us standing around with hands in our pockets. 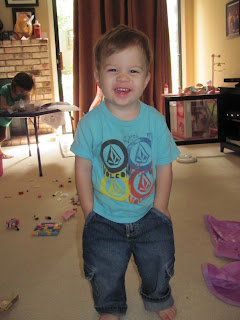 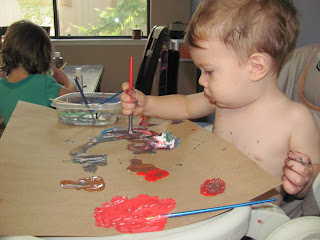 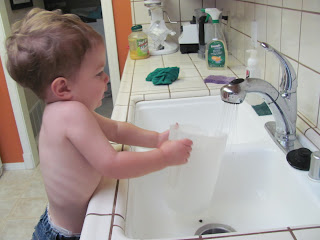 Michael has reverted back to wanting only  his "two ones whales" to sleep with. These two animals are his highly favored sleep-mates. Often, they are chosen in place of snuggling with Dad or I. I'm a little jealous of these whales sometimes. Here he set them up to watch a show, each on their own pillow. 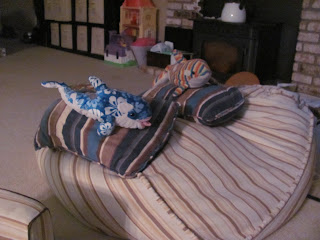 Michael was up early with me (early meaning 8am probably, he sleeps A LOT and usually doesn't wake till almost 9am) one morning while Dominic was in Alaska and we decided to make muffins while Penny was still asleep. He loves to bake. After he helps me make the batter, he likes to line the muffin pan with the liners. Its like a perfect puzzle that he just can't get wrong. It takes a long time, but is so worth the wait hearing all the commentary that comes along with it. 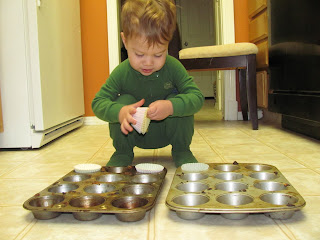 After I filled them, I let him go to town on he spoon. 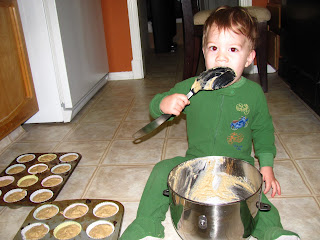 But that just wasn't enough and so his fingers made their way to the muffin tins. 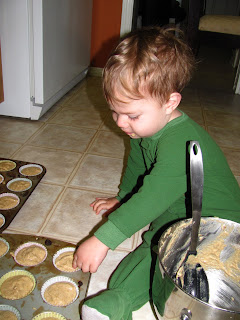 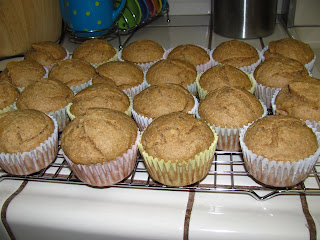 He gobbled up two for breakfast. I think I may have had 4 or 5 and Penny probably had 2 or 3. These are a favorite around here. 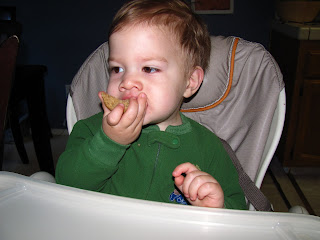 Penny and a friend spent a few hours one morning making maps with stickers we got at the dollar store and then proceeded to play outside with their maps trying to find things. This was one well loved piece of paper that day. So loved, in fact, that she snapped a few pictures of it too. 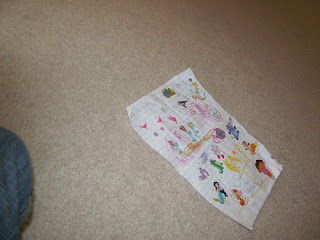 This was one of Penny's favorite books as a toddler and is also one of Michael's favorites. I love the sound all the windows make when they open, like the advent calendars we used to get when I was a kid filled with hard, stale gummy bears.
Posted by Katie at 10:58 AM