So its about time I chimed in about my pregnancy. I haven't written anything about it really because, well....as my doctor said, "I'm kinda boring."  I go in for appointments and they check the normal vitals (weight, blood pressure and baby's heartbeat) and then ask if I have any questions (I think I've had one question for them this time around) and send me home. I was out of town last week and I asked my doctor if I should come in a day early (I'm up to weekly visits now)  because I was leaving town the following week. He told me not to worry about it and he'd just see me the following week. Boooooooring. Which he said translates to a happy, normal, healthy pregnancy.

Interesting, because when I was only 17 weeks along I skipped my monthly appointment because our insurance was such  at the end of last year that it was out of pocket and I knew all they would do was check my weight, urine sample, and BP only to listen to the heartbeat of the baby, declare it great,  and send me home. I was doing very well and had no questions for them. I didn't see the point in paying the $100 or whatever it was to come in. The nurse I talked to when I called to cancel my appointment said that she strongly advised against it saying, "its absolutely imperative that you keep all your appointments. Its not safe for the baby to skip any." I realize she has to say that...... but didn't appreciate the guilt trip that came with it. I felt healthier than I've ever felt AND I was pregnant. So, I found it ironic that during the last few weeks, probably at a more critical time than before....I was being told that I could skip my appointment.

Apart from what I've already mentioned at the end of this blog post a few months back, I can honestly say that my pregnancies are getting more and more uncomfortable. I still enjoy pregnancy, but they are becoming more and more difficult to bear with a full grin on my face. I think I remember being pretty much invincible when I was pregnant with Dominic. I had some sciatic nerve pain around 6 months but attributed that to working and being on my feet and so I just quit my job as an x-ray tech and it went away and all was well. Well, with this 4th pregnancy, I again got some sciatic nerve pain at around 6 months but don't have the luxury (nor would I want it) of quitting my "job," otherwise known as being a mom. I toughed through it and just found that by the end of the day I just needed to be off my feet for a little bit more than normal. The massage that Sean scheduled for me the day after my birthday was very helpful in relieving that pain.....only to be returned a little bit after a long plane ride at the end of March. No worries. It has yet to present itself in the last few weeks so I think that bit is behind me.

So, what else feels different about baby #4? My pelvis feels like it is going to split in 4 several times throughout the day. I don't remember noticing this before (perhaps a little with Michael, but not like this). Its almost the feeling that I just need to pop something back into place. However, nothing is out of place (well, that or its all out of place for the time being). Its just that I have 30 pounds of extra weight on a pelvis that is being held together by rubber bands that have already been stretched really far 3 times before. Oh the joys.

Today Sean did some interval training where he carried some 40 pound sandbag up a hill and did some burpees with it and a few other exercises. He then made some comment later in the evening like, "oh my goodness, you have no idea how much I hurt right now."  Uh, really? I laughed and I'm not sure he intended the comment as a joke but quickly realized how funny it was and said, "well, you gained a few pounds at a time and got to ease into carrying an extra 30 pounds." To which I laughed again and said, "and I never get to put it down yet I still climb stairs, run after children and go all day long, rain or shine." Sometimes I think men just won't ever FULLY understand (though he fully spoils me). And, just so you don't think he's stupid, he was totally kidding. It was pretty funny.

One thing I did differently than any of my other pregnancies this time around, is I kept running. In fact, with Penny and Michael I had to stop running in order to get pregnant. I didn't want to do that this time, but was prepared to if it seemed to be effecting the progress of adding children to our family. That just wasn't the case this time around. I thank Heavenly Father for that because running really was my ME time. I was able to clear my mind and de-stress from a long day. It was rejuvinating. I kept running until mid January when it was clear that if I continued, my baby was going to fall out mid stride. It just started to become too uncomfortable. So at 5.5 months gestation, I put the running shoes and the new Garmin I got for Christmas away to collect dust on the shelf for another 5 months or so. Running for that long really has made a world of difference physically this pregnancy. I have gained a few pounds less than I did with Penny and Michael and feel stronger (even though my body hurts). I feel like I don't get winded as easily and think that it will help when I go in to labor. Hopefully staying fit longer into the pregnancy won't make the labor any shorter.......I don't want to be having our baby in the car.

Last thing we did differently is that we didn't find out if the baby is going to be a boy or a girl. At first this was Sean's idea (planted by Mike Howell a few years back) and I thought it was a dumb idea. But, I went along with it to humor Sean. After not finding out during the first ultrasound, it got kinda fun. The kids were wanting to know, but at the same time having fun not knowing. We picked out two names and the kids lovingly tease each other about what they think it is. The only downside is that I refuse to call the baby, "IT" and so I often refer to "the baby" as "he and she" intermittently which confuses people into thinking that we know what it is. Funny thing is that I try to consciously say" he" just as many times as I say "she" throughout the day. I have to say, it has been really fun not knowing. Sean and I are both very excited to find out if we get an Elizabeth Jane or a Dennis Jarom......and extremely excited to see the kids faces when they find out. Penny insists that she knows its a girl but reassures us that if its a boy she'll still be happy. Dominic wants another little brother for himself but actually wants a girl so that Penny can have a little sister. Michael says its a "bowee" just as many times as he says its a "gowl," so there really is no way of knowing if he has a sixth sense for it.

So with 1.5 weeks to go I can honestly say, we're ready. Healthy, in a little bit of pain, and very ready. Our 6th Anniversary is on April 28th and we may end up celebrating that in the hospital. =) I'm just hoping that whatever day we are in the hospital, my husband doesn't have to decide whether or not to tend to me, or the NFL draft that will forever come up on our anniversary.....no no, I'm not bitter about scheduling my wedding day during the draft weekend. What I didn't realize is that I wasn't just scheduling that for one year......it would be EVERY YEAR FOR ETERNITY. Do you think they have the draft in the Celestial Kingdom?  But really, we're ready for you baby....... hut, hut Hiiike! Wanna catch Sean? 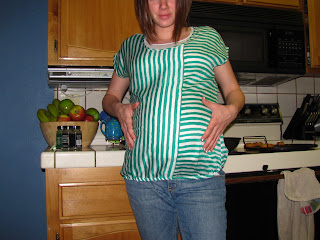 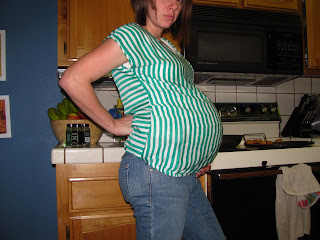 This post made me smile! And chuckle too! Miss you! And love the hairdo! Can't wait to hear blue or pink! It will be surreal, like a Christmas present you just can't wait to open! Good luck! Will be thinking of you the next couple weeks!

katie, this is yaneth. I love love this post I enjoyed so much! you look amaizing pregnant, /I cant wait to see pics of your little one.
love

Reading this just gave me the eebie jeebies. Pregnancy is HARD, hard, hard. I remember all the pain you describe... ahhh, good luck with the birth. Can't wait to hear how it goes and find out what "it" is!