My kids have caught a frogging bug. They want to run around in mud puddles and catch frogs. We got skunked on this adventure, but we heard a few. Our friends live right next to a huge place to catch frogs but we haven't headed over there yet. We want to go with them and they were sick last week when we wanted to go so we ventured to a different spot that I knew had lots of frogs....only, they weren't really there. Again, we only heard a few.
Stay tuned though, cuz we'll go again and again and again till we find some. It was a lot of fun
I had to leave Michael behind because he refused to put the rain boots on and well....that was just kinda a requirement for romping around in the mud as I couldn't carry him the whole way. But, it really turns out that it was better that he didn't come to this location because it wasn't really suited for a toddler.

Dominic was in heaven with a bucket and his boots. He got pretty wet from just being out there, but he loved it. 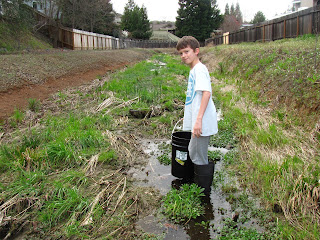 Penny was very careful and worried about the water getting too deep and getting in her boots, but she was having a blast. She chilled out a little bit and got used to it. I don't think I've ever taken her out to play in a stream like this in boots so it was a new thing for her. 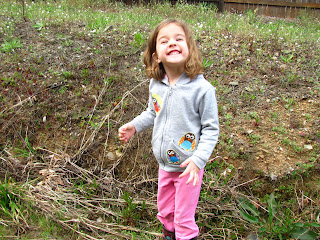 It will be a sad day when she doesn't fit this jacket anymore, I love it. 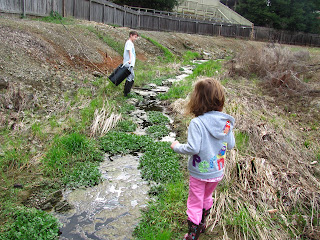 This is Penny's silly dance. She shakes her booty and moves her upper torso side to side with her hands like this. Makes us laugh every time and she knows it. 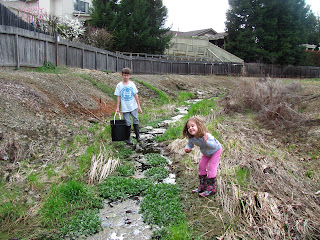 Goofy faces at the end of the trail. Again, we got skunked but we had a great time. 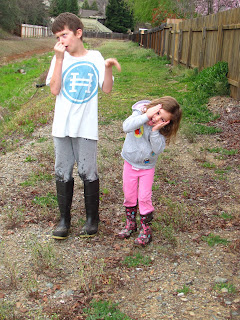 See how wet his knees are? His boots got a little bit of water in them from trying to scoop up water with the bucket. He was hoping to just randomly scoop a frog up that was hiding. 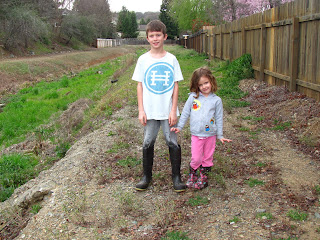 FUN! I love Penny's pose in that last picture!