So, this last Thursday was Dominic's scout Blue and Gold Dinner. The theme was resourcefulness. Though this cake doesn't look very different from last years cake, it was definitely a different undertaking. We made the cake from scratch and used an amazing recipe (that I overcooked so it turned out a little dry, next time it will be the bomb though). It called for buttermilk, which I didn't have. So, with Dominic's help (and the kitchenaid), we turned 2 cups of heavy whipping cream into 1 cup of butter and 1 cup of buttermilk. It was so much fun and I felt like a real pioneer (minus the bonnet)! I used buttermilk in the recipe and the butter in the frosting. Dominic and Penny really enjoyed the process and we'll definitely do it again and take pictures next time. At the price of butter, its not really that expensive to just make my own from Heavy whipping cream. In fact, it might be cheaper. I've got to do the math and then get back to you on that one.

He considered doing a bear cake because he would be getting his bear that night, but ultimately went with the cooler LEGO cake because lets face it, this kid can be pretty resourceful and creative with his legos.

The icing was a little dry, but we were running out of time and well, it was fine. He iced the cake with only a little help from me with the corners/edges. 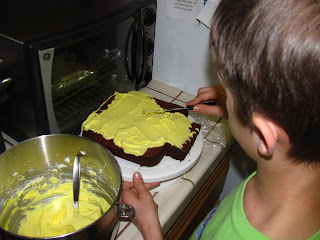 He then picked out the lego head expression that he wanted to use and we stenciled it onto the frosting with the back toothpick. He then knew exactly where to put the black frosting. 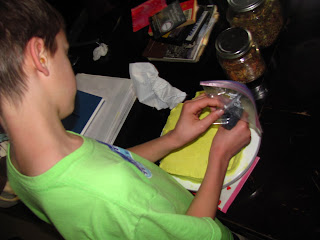 He was able to do the first two eyebrows all by himself, but could not do the mouth because the frosting was just too hard and wasn't coming out of the tip. I finished it off for him. Last time I made frosting I made it too runny so I think I just overcompensated this time. Ooops. 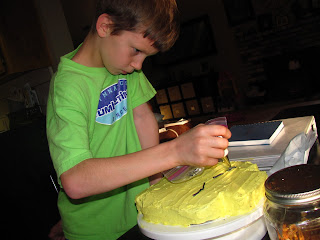 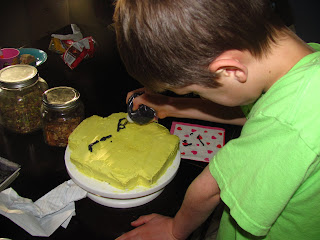 We added a blue neckerchief so he looked like a bear scout. Pretty handsome if I must say so. 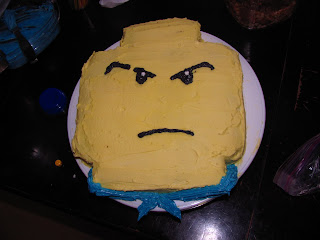 I love this kid in his uniform. He's almost 10, where has the time gone? 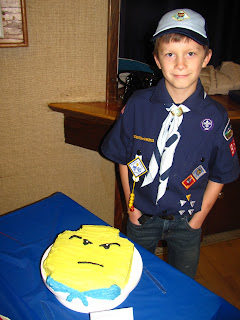 Sean was there, but he had just worked out and was in his athletic pants and shirt. He didn't want to be in the picture (like I look so great, goodness!) so it was just Dominic and I (and baby in my tummy). I'm just over 31 weeks here. 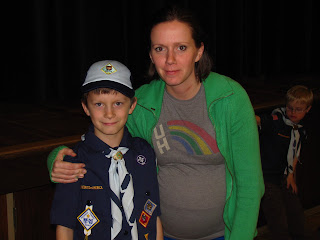 We are so proud of all your hard work in scouts Dominic! You are doing a great job. Now, how many arrow points can you get before you turn into a webelos? Ready, set, GO!
Posted by Katie at 9:42 PM

That cake is so rad, especially since it was created by a 10 year old! Way to go Dominic! I'd totally pay him to make one for my kids :) heehee

cute cake! being a webelo is the best part of cub scouts! soon he will be there.