We went to the Folsom Zoo Sanctuary on Friday. Its a little zoo with rescued animals mostly and it doesn't cost very much to get in ($11 for all of us). It was the perfect mid-morning excursion on our last day off of school for the week. The weather couldn't have been more enjoyable and the animals seemed to be out and spunky.

Here are my three bear cubs. One, not tall enough to quite reach the hole and the youngest too busy eating to stick his head through. 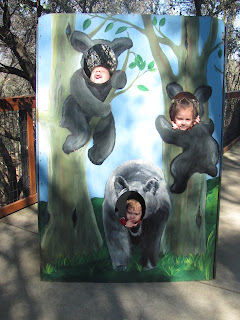 The Tiger had just woken up and was just starting to walk around and investigate for the morning. What a beautiful tiger this one was. Michael kept signing and saying tiger, tiger tiger. He didn't quite understand why he couldn't pet the tiger. Penny was a little nervous and wanted Michael back in the stroller to make sure he didn't get eaten. 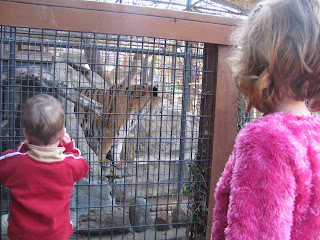 I must look extra plump and delicious. 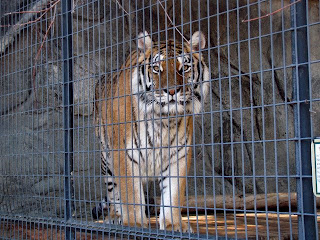 Seriously, after I took this picture Penny told me that was enough and to get Michael back in the stoller so he didn't get eaten. I assured her that the tiger could not get out of his fence. 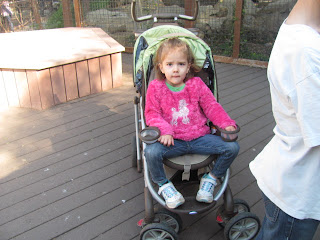 There really wasn't much between us and the tiger though, in all honesty. 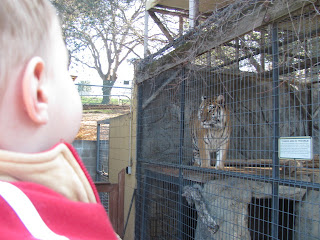 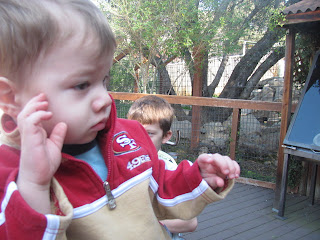 There were tons of deer grazing in one area. They weren't caged, but had a whole hillside to roam around on (the hillside was caged). Penny wanted to know if we could have a deer for a pet. I had to explain that that was why some of these deer were here actually, because people tried to keep them as pets and you aren't allowed to do that so the zoo then has to take them and give them a home because they can't be in the wild once they are not afraid of humans. 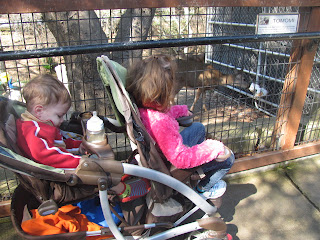 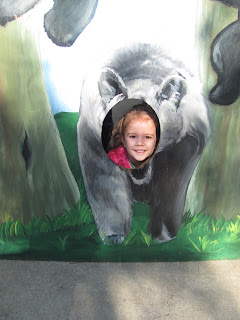 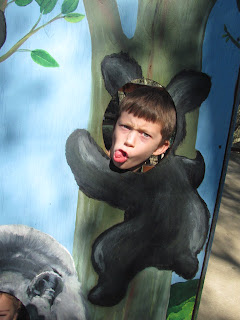 We seriously hit all the exhibits at the perfect time. This big black bear was sitting in his cave (the opening faced us) just starting to stretch and open his eyes. He then meandered out and sniffed around. He was quite massive though this picture makes him look rather small. Dominic was impressed. 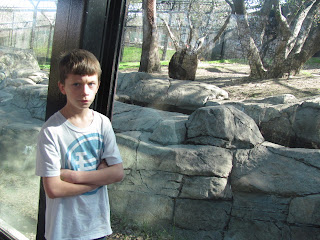 Dominic and my favorite animal, by far, was the peacocks. They make a horrible noise but they are so beautiful! There were probably close to 40-50 peacocks around the whole zoo, some just wandering about the grounds and some wandering about the cages. Some of the most amazing colors we've ever soon. Dominic was dying to have a peacock feather, just one! 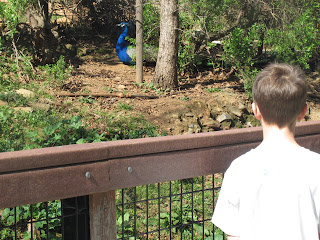 There was a man who had a small steam train and took people for rides outside the zoo. It was about a 6 minute ride and $2 per person. So we went. Each train ride that we saw had at least 25 people on it. You do the math.....thats a good chunk of change everyday. Dominic did the math and was astounded! The guy grosses probably about $2000-2500 a day for driving a stinking train around a track! Awesome. 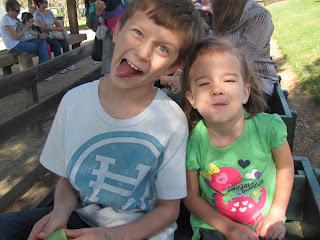 Michael told me he was "so excited." That phrase right there was worth the $8 to ride the train. 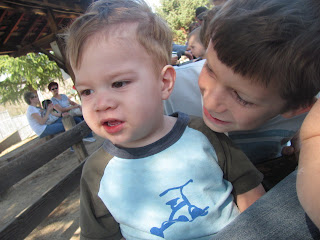 The the conductor (we'll call him that) asked if he could take a picture of us and adjusted all the settings on my camera and took this amazingly crisp photo...WITH MY CAMERA. so awesome. Let it be known I'm just over 30 weeks pregnant in the photo. Woot woot! How in the world will my tummy stretch any further over the next 10 weeks.....we shall find out I think. 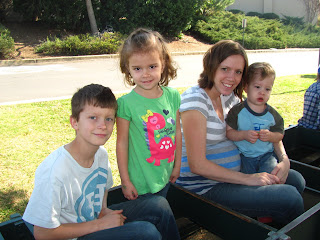 It was a great day and my kids both said that was their favorite zoo ever. Forget you SanDiego Zoo! You got nothing on Folsom! =)


I think I love the small zoo's better than the large ones anyways, you can usually see all that there is to see in less than 3 hours (including eating lunch). That's my kinda zoo.
Posted by Katie at 11:22 PM

What a great day for you guys! That's funny, I have a picture of Ashlee, Jacob and I on that train when I was about 9 months pregnant with Noah. I miss the zoo.