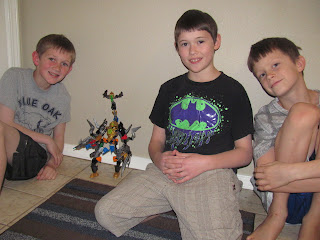 This year has been a great year to get away from the "latest and greatest" toy on the market. We aren't surrounded by other kids all week (and we don't watch TV commercials) so Dominic and Penny really haven't been exposed to the latest trend. Its been kinda nice in that our OLD toys have been rediscovered. Dominic has really enjoyed his bionicles again this year. We've had these since he was 6ish and he played with them a lot the first year, but then the last 2 years they have just been in one big box collecting dust. I debated selling them at one point but I decided to keep them a little longer and see if he'd get back to them. Well, this has been the year! Legos and Bionicles have given us hours upon hours of playtime again this year. These are just toys that keep on giving.
I love it when his friends come over and they don't ask to play video games, they ask to get out the bionicles. We really do have quite the assortment and they have made some really neat concoctions. They usually want me to judge the best ones but its so hard! They are all very creative.
This particular one was one they made together. Austin and Davis did the legs and torso and tail. Dominic did the upper body, arms and head. Mean and lean! 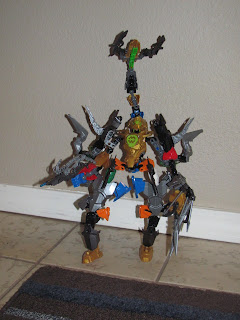 Wouldn't want to mess with this guy, thats for sure. 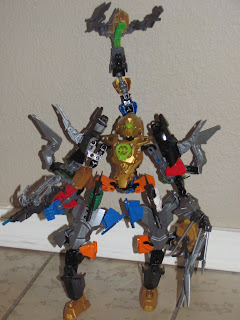 These toys, like legos, are pricey....but they are worth every stinking penny and will be saved for grandkids someday. Assuming we still play with toys by that day and age.
Posted by Katie at 8:42 AM

After playing bionicles at your house, my boys came home and found our bucket of them down stairs. A band parent gifted us a whole storage bucket full of them and so I have about 10 bionicles set up on the counters downstairs. They are so much fun. Thanks for reminding the boys about them.

I have soooooo many pictures of bionicle creations. it's not even funny. they always wanted to send them in to lego. it never happened but it was documented! they still get excited when they see them.
lego/bionicles never get old. Micah will still play with them. building and creating is not a childish thing to do.

That's awesome. My 20 year old brother still has his Bionicles (he doesn't use them, just has an attachment to them) and when we go up and visit in OR my boys LOVE them!