Weekend at our house...

Saturday was a very busy day. It wasn't especially nice out or anything, just busy. We had had a busy evening the night before visiting the Sportsmans Expo at the Cal Expo Center with all the kids (plus Stella and a friend for Dominic) for a few hours on Friday night in the pouring rain. The show was indoors, but it was a good quarter mile walk to get there (thank you to the 6 umbrella's that I had in the car!) I reminded Sean of the fun adventure it would be to run to the show in the rain with 5 kids in tow. Adventure was a good word for it. We also got asked a jillion times if all the kids were ours. Hee hee. That was kinda fun actually, They are all about 1.5-2.5 years apart so it was possible that they could have been. We didn't take a single picture while we were there......but I wished we could have gotten one of us all running in the wind and rain to get to the car after we were done. It would have been a site to see. Thank you double stroller for keeping the youngest two dry!

So anyways, Stella stayed for the weekend and our Saturday started with a 9am basketball game followed by the girls going to G-Grandma's to play. Michael and I came home for a nap and Dominic and a friend played while and Sean worked (love you sweety) in the garage on the business. That was dreamy. I don't always get a nap, in fact I rarely get a NAP. Sometimes I get a rest on the couch, but rarely a nap. I needed it.

I then made whole wheat (white wheat, have you ever used it? Just as nutritious as red wheat but without the strong flavor. More like using white flour....but its not, its whole wheat) rolls to go with our home made tomato basil soup that I was brewing in the crock pot all day. Dominic ended up being sent to his room before dinner even started. He's never been good at keeping his mouth shut about dinners he doesn't like and I've only as of late realized that he just doesn't have to join us at the table when he decides to be like that. It always ends in him ruining the dinner atmosphere because of his constant complaining about what we're eating and how much he has to eat and how he.....blah blah blah. It effects how Penny and Michael eat and I've had it. So he was sent to his room while we ate and then re-invited to the dinner table to eat by himself after we were all done. He didn't like that.....and it happened again tonight (with one of his favorite dinners) only two nights later. I excused him from the table and sent him upstairs (not in trouble, just away from the rest of us so we could eat in peace without the constant complaints about something in his dinner). I hope he's getting the picture and I don't feel bad because I'm not starving him and telling him he can't eat......he just can't eat with us when he acts like that.

Aaaaaaaaaaaaaaanyways. There were some pictures in this post. When I make bread rolls, there is usually a little bit leftover from this recipe (see link for yummy recipe) and Michael and Penny LOVE to play with it. Since Penny wasn't back from Gma's yet, Michael got to play with it all by himself (she got her turn when she got home and he was all done with it). This dough got a good 3 hours of playtime before it went in the garbage. Well worth not making it into rolls.

And yes, thats baby #4 inching his/her way into the picture. 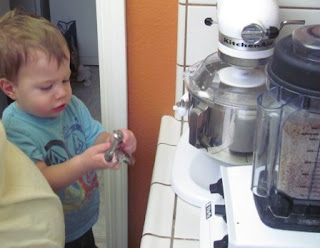 I love his busy face and that he knows what to do with kitchen utensils. He helped me make the dough, pouring cups of this and that into the bowl. Playing with rice and beans has made him quite the expert pourer. 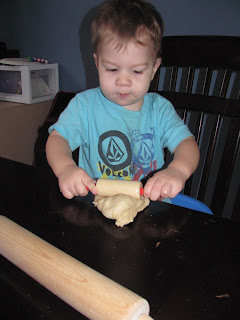 Lately, this is the face you get if he notices that you have the camera. This is his "cheese" face. I. Love. It. Is it the flash that makes him think he needs to squint his eyes? Hee hee 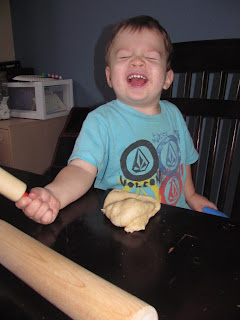 I could seriously eat his cheeks. He liked it when I rolled it out nice and flat for him, but I had to use the big roller.....the little roller was his. I tried to use his and he took it away and said, "No, dat My pin. Dat yours one. Dat one mommy's."
Yes sir. 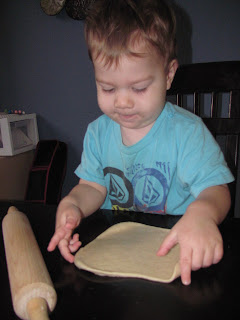 I remember loving the taste of raw bread dough as a child and taking snitches. He takes whole bites. 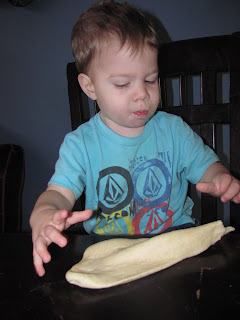 Then he found the faces and decided to color a little. He likes to use the green and draw boogers on everyone. He thinks its quite funny and....well, it is. 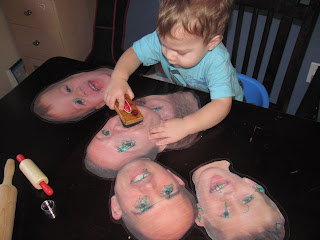 Aaaaaaaaaaaaaand then after dinner, I got out the sugar cookie dough I had made earlier and had chilling in the fridge (see why I needed a nap?) to make some cookies for the YW at church the next day. They are much easier to transport when they have sat undercover overnight and the frosting doesn't stick to the touch. These are the most delicious sugar cookies I have ever had. I got the recipe from my sister and they are to die for! They almost taste healthy as they aren't super sweet because they have sour cream in the batter. My kids love it when we make these (and so do the YW).

Michael got out the rollers again and went to town, though I'm not sure what happened to "his" roller. 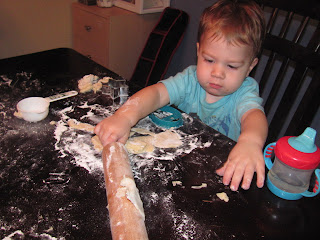 Stella and Penny were cutting out shapes like mad-women. There wasn't quite enough room for Dominic to be at the table yet so he was playing x-box and came in and cut his out when the girls were all done. Penny had a lesson in starting at the edge of the dough instead of cutting them out right from the middle. Great Grandma was over for dinner and the cookie making. 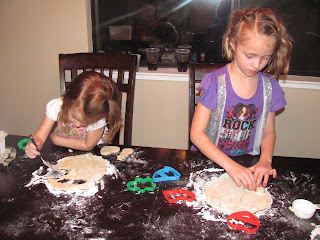 Still busy. We had just about every holiday covered with our cookie cutters. 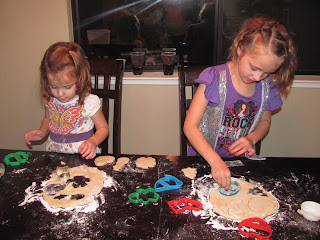 And then Michael tasted this dough and all the "mmmmmmmmm, so good." comments commenced. When he says this, he requires a response so if you don't say something back, he keeps saying it until you do. He was so vocal. It was pretty yummy. 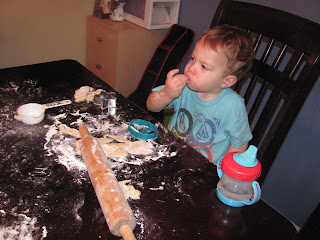 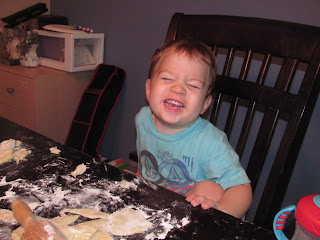 These two girls were so goofy with each other and excellent sharers. I loved hearing them ask each other to, "please pass the star cutter," or whatever it was that they wanted. It was music to my ears. 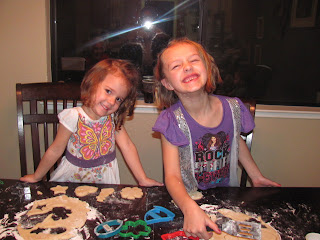 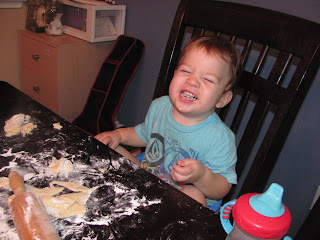 Penny is ALWAYS crossing her eyes and making silly faces. She's the comedian around here lately. 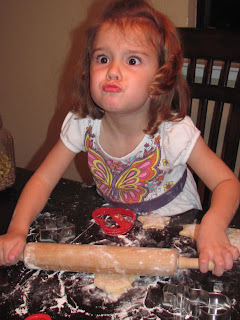 Stella loves to pose for the camera. Such a pretty girl. 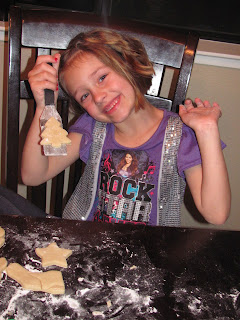 Hahahah.....don't you want to eat the cookies they are making? 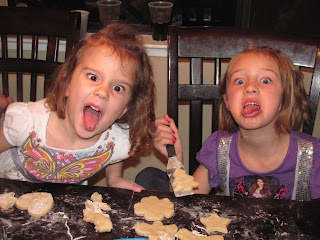 Frosted and ready to go for the next morning. Sean ate one the next day and then realized that I probably made them and covered them for a reason (like, so that nobody would eat them). He could not stop laughing as he told me he ate one....only because he knew how ridiculous it was that he didn't think of it BEFORE he took the first bite. Its a good thing I stinking love him. It was pretty funny....but perhaps you kinda had to be there. 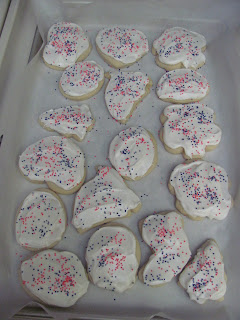 So, by Friday, Saturday and Sunday, in the evenings, I was experiencing sciatic nerve pain. I look back on my weekend and think.....uh, no wonder. We did a lot. Today (Monday) I had none. Guess this mama is just gonna have to slow it down a little and do more from the chair instead of on my feet. Like, maybe I could have asked Sean to come grate the soap for our laundry detergent since my grater wasn't wanting to stick to the counter. You know, the little things. Thanks for taking a picture babe. You're always there for me. 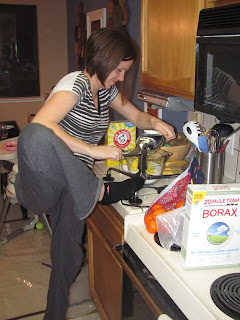 slow down! You're making us look bad. :)

I would've TOTALLY eaten Dominic's portion of tomato soup and homemade rolls- just sayin'. I love your belly in that picture and want to put my hands all over it! I bet that pose on the counter helps your back =)