Michael is a goof. He likes to switch out his plugs for a nice fresh cold one. =)
This time though, I took both of them from him and put them both in my mouth. He laughed and said, "Two ones!" and yanked them out of my mouth and put them in his.

He also has started a cheesy grin when we pull out the camera. I love this kiddo. 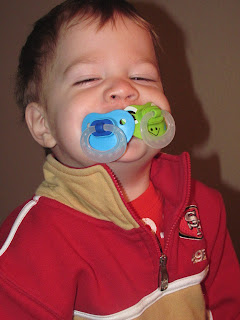 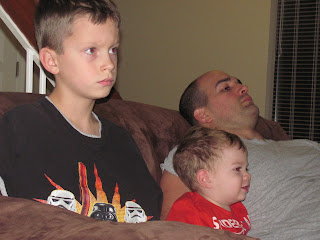 Penny loves to do school work. Not everyday, but if Dominic is working hard on his work, she'll often go pull out her folder and work on whatever worksheets I've printed up that week. She loves these ones because we decided to use the banangram letters to spell it before she writes it.  She's getting to be such a good reader now and can read a whole book to me at bedtime (level 1 or level 2 depending on how hard that level 2 book is). I love this shot though, with her bum and feet in the background and that cute little hand on her face. 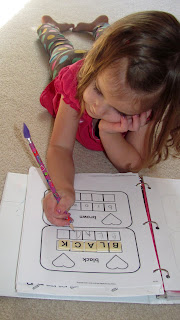 Michael's stuffed animals have become quite the collection around these parts. He has to have his "two ones whales" and his, "two ones ang-gy birds." It makes for quite the lap full. 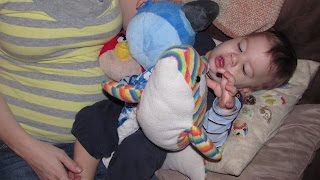 Penny, in the last few months, has become queen of the silly face. She is constantly crossing her eyes and being silly.....even with food in her teeth! Its hard to discipline her sometimes because she'll just bust out a goofy face.....but we do it anyways. There have been several times where I have had to tell.her its not appropriate to be making cross eyed silly faces when she is in trouble and I'm talking to her about it. Sean and I can still hardly keep from laughing though. 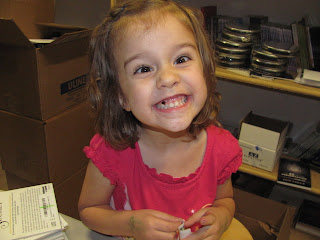 I remember one time my aunt drinking some coffee or something as she drove me home and I was so in shock that she was drinking and driving. Michael doesn't let a little hunger stop him from getting from point A to point B. I love how his hand is crossed over to push the button. 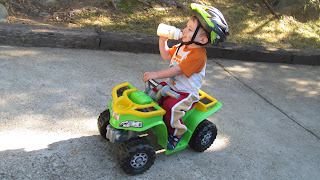 And he found a nice little storage spot for his bottle. I just about died laughing. 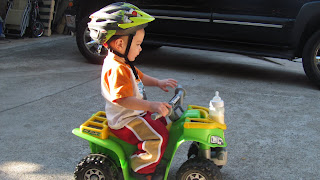 This little girl is good on her balance bike. She could probably easily learn to ride a two wheeler at this point, but we don't have the driveway where she could practice day in and day out........so we haven't bothered to take her to the playground and teach her. 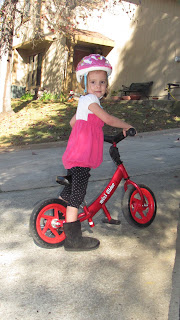 Our neighbor has this ceramic dog on her porch as her doorstop. Michael is obsessed with it and I can often find him over there hugging and petting it. Its usually a crying fit when I make him leave (because he also likes to ring her doorbell). 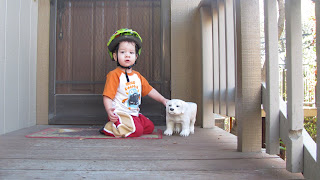 Dominic has gotten pretty good at guitar. He's not amazing but its all been self taught so I've been quite impressed with his progress. We have him in guitar lessons this semester thanks to our home schooling vouchers. We'll see how that goes. He's already gotten a few good pointers from his first lesson. His favorite place to play is either on the beanbag or in front of the pellet stove. Now, put the beanbag in front of the pellet stove and he's in Heaven! 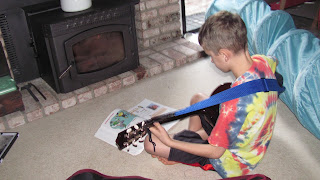 Michael has discovered that painting is fun. For some reason, the last time I put this out for him I had a little cup of water and a teeny paintbrush and well....it just wasn't that great of a success as he just dumped the water over and dug holes in the paint. Then I found this brush and had the great idea to just put a bit of water in each color and THEN let him paint. Who cares if the colors blend, he has a great time and he makes abotu 3 or 4 pictures each time. Its tons of fun and a lot less stressful for me. 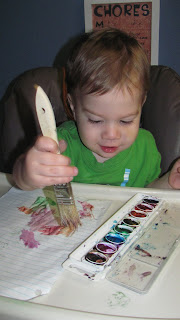 His shabby hair was getting to be a little too much and so I gave him a trim. This cape lasted about 2 minutes before he was trying to get his arms out. Surprisingly, Michael does better than Dominic for haircuts (even with their 8 year age difference). 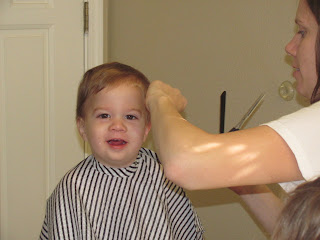 Getting her nails done. Now that we have afternoon church, I usually have time to paint Penny's nails Sunday morning and get some girl time. We haven't done these flowers in a long time and they are super cute. She loves them and they stay for a good 1 1/2 weeks. 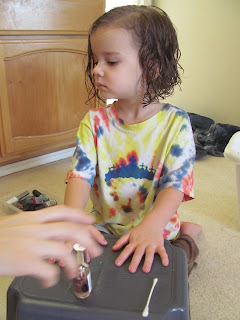 She was teaching Michael how to write the alphabet. I had to pull him away though because he kept trying to erase them and that was stressing her out. I love her letters. We went to this cool park. All the kids were on the tire swings at some point during the day. Naomi and I really had these kids spinning, to the point that they basically all got sick (but didn't vomit). Good times. I love that in this picture, Dominic isn't actually holding the chain......I USED to love the tire swing....though if I was to go on it now I wouldn't last a few seconds before losing my lunch. 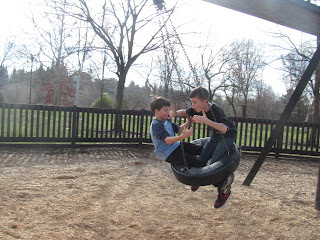 I got this great drill set for Michael for Christmas. He LOVES this drill and gets quite in focus both drilling them in and out. I love his fat little lips. 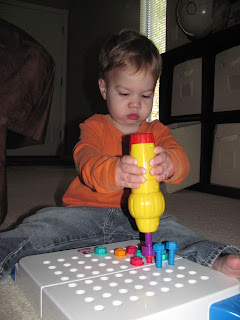 She's learning how to play XBox and loves it when the sharks eat her. She's goofy. 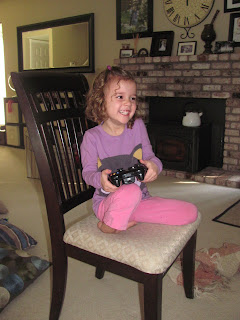 I caught Michael stacking his banana pieces. He likes to make his food into snowmen and then sing the song and eat them as they "melt" 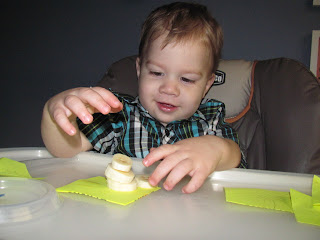 Michael loved this activity. I have this container of large sequins in different shapes. he likes to shake them out into this pan. Its a fun activity that is fairly mess-proof. At one point though, he and Penny knocked the pan over 4 times in like 2 minutes (cleaned up with a small dust pan and hand broom). It was frustrating and funny all in the same breath. We put them away after that but we've played with it several times since then. He just likes to shake them and watch them fall out. 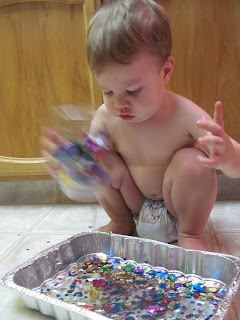 Other favorite guitar playing place. I put some packing peanuts in the bag as it was getting a little flat. Worked like a charm. 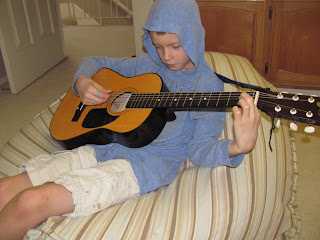 Ha! Ashlee used to say "two ones." I loved it. Must be something about language development.