There are days now and then, because we rarely leave our yard during the day anymore, that I have more errands that can be run and still allow for Michael's nap. This doesn't happen very often, but when it does.....he does things like fall asleep WHILE EATING CHEETOS. If I had been able to pull over I would have just so I could have gotten it on video. Seeing him chew on his last few bites of cheetos while fighting to keep his eyes open is something I never want to forget. Love him. Cheetos are pretty darn good and I totally get it. 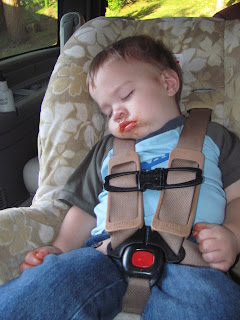 Michael asked for help in the garage and when I came out there he handed me this 49ers football helmet (from our costume corner) and asked me to help him put it on. Once we got it on, he RAN over to the tricycle and knew himself ready to ride. I love that he knows he needs to wear a helmet to ride a bike........ 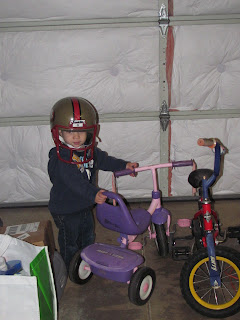 someday we'll worry about teaching him what is appropriate bike riding attire. 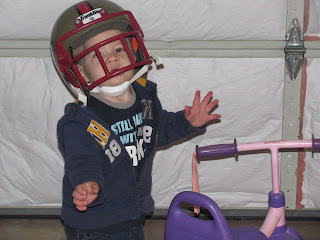 A few hours later Dad found Dominic's head squeezed into the same helmet while working on labels in the garage. He was so mad that Dad took this picture.....I love it. Die hard fan. 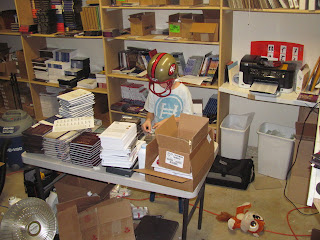 Michael came over and got from off the couch, pulling on my pants and telling me to get up. He brought me to the easel where he proceeded to PUUUUUUUUUUUUUULLL on the mat underneath while saying, "beans. Beans BEANS." This boy loves to play with rice and beans. He's really good at pouring now and can help me add ingredients when I'm baking in the kitchen. I usually have he AND Penny helping me bake from the sidelines now. Rice and beans (with bowls, spoons, measuring cups, strainer, funnel & empty water bottle with narrow top) can keep him busy for hours at a time......not even kidding. Best. Toy. Ever. 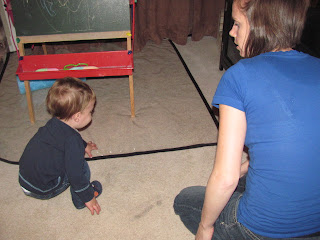 This little Penny has really matured in her gymnastics abilities this year. Its fun to see her actually be able to do things that were REALLY hard for her last year. She can kick herself up to a headstand against the wall and hold herself there, she can do a bridge and get her head off the ground, she can do a cartwheel (kindof..but she gets it and is practicing and getting better). She LOVES gymnastics. Plastic knives are the best knives to have kids help cut olives. They cut them so well without squishing them but they don't cut their skin. Michael LOVES THIS TOY and loves cutting real food too. He absolutely loves cutting olives so after Penny is all done cutting olives on taco nights, I usually let him cut until his heart is content too. He can actually do it when he isn't holding the knife upside down. 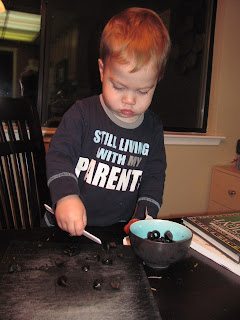 Michael was trying to WALK up the stairs instead of crawl up the stairs and couldn't quite do it without losing his balance because of how far he has to step up. So, when Penny walked by, he stuck his fat little hand out and said, "Hand hand. Hep you." So Penny proceeded to hold his hand and help him all the way up the stairs. I was so glad the camera was right on the couch because I did not want to step away to miss this moment, but totally wanted it preserved by photo too! I love these yidders of mine and feel so blessed to be their mom. 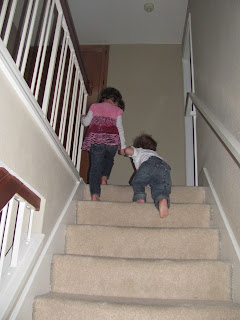 Thats right, I bought a cardboard Princess castle for Penny to color and use during her princess and prince birthday party (pictures coming soon). Dominic, Penny and I went to town for hours and hours and only put a small dent in the coloring....its been fun, but we sent it over to Gma's house to give the kids something to do while over there (and to get the monstrous thing out of our living room!). 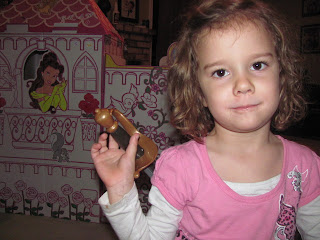 If you ask Penny to make a crazy face, this is what you get.....every time. 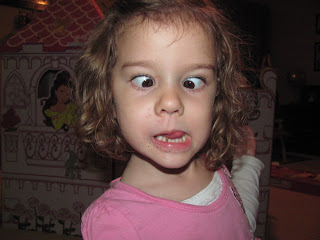 She colored Belle's dress and hair all by herself but asked that I color her skin because her hand was tired. 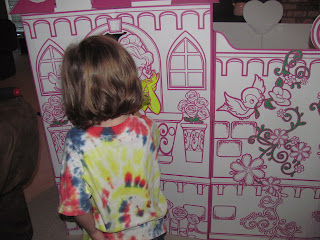 These vines were fun until 30 minutes later I looked over them and noticed I had only done one half of all the vines on the box. Holy cow! 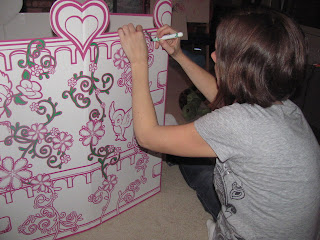 Michael was especially snuggly one morning, but not with me. He wanted Penny for a bit....then Dominic. Everybody loves his snuggles. I love his soft, rosy morning cheeks, puffy lips and his swollen morning eyes. You are amazing Michael. We love you so much. 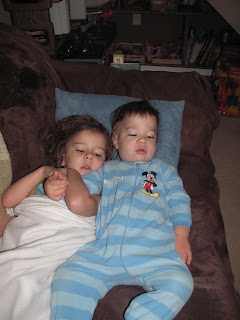 Snuggling with "Donimic" .... He used to say his name right and then all of the sudden, he's started switching the N and the M around. So cute....so cute. You should hear him try to call for him......the veins in his neck poke out and his body goes stiff and he yells "DOOONIIIIMIIIIC!" up the stairs. Seriously, love love LOVE this kid. 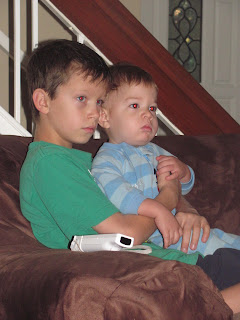 We're getting close to Penny's birthday party pictures where I'm dressed up as Snow White. Are you excited to see a pregnant Snow White? hahaha...Stay tuned.
Posted by Katie at 10:26 PM