Penny had her 4th birthday at the beginning of December. Even as I type that, it seems weird that I'm not typing that she turned 5 or 6. She seems so much older than 4 to me...I just feel like she's been around, always, though I do not wish to rush the time.

So, she had decided on a princess party, and at the last minute decided on a few princes that HAD to be there (eek! Seriously? I bought all princess stuff)..... but since it was her party, we rearranged how the party was to take place and invited the boys along too! It was a crazy mad-house, but it was a lot of fun.

That morning, I surprised Penny with a new Snow White Costume. She was set on being Belle (her Halloween costume) until she saw this one. So fun. 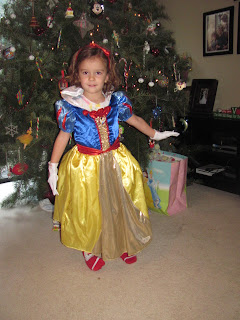 And since my friend had a Snow White costume in my size, I wore one too. Funny story. I had to pick up one of the boys from Kindergarten just before the party and was already dressed in my costume. I was hoping to be able to drive right up to the front door and let him hop in......but alas, there were too many cars and I didn't have time to sit and wait (party started in 10 minutes)....so I had to get out and go get him at the door.
1) I was wearing a princess costume and it was December. I got a lot of stares.
2) He was not all that excited to be picked up by a princess
3) The jaw dropping glances I got from all the little kindergarten girls made it totally worth it. A princess came to their school......and there were a few that were absolutely stunned. So funny.
4) The gold glitter in my car (from the bottom hem of the dress) still isn't gone 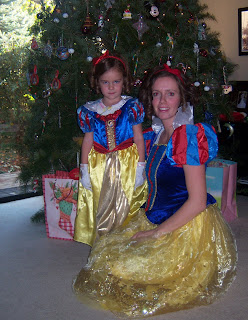 The girls all bedazzled tiaras (which took a good 30-40 minutes and was oh so fun for them!) 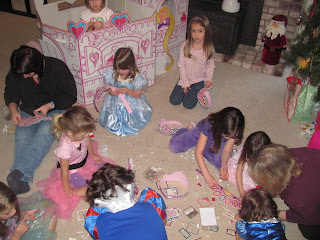 The boys put stickers on shields (which took all of 5 minutes) and then chased Dominic around the house with swords. Dominic was a good sport as they sometimes just couldn't control themselves and he would get punched or kicked in all the flurry of fun. 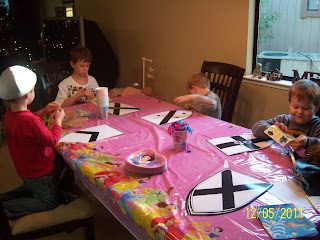 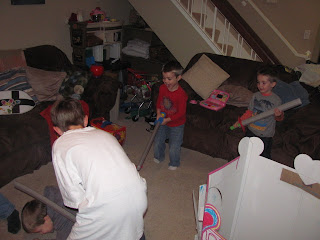 And then the boys went out to the garage where they were instructed that the girls had just been kidnapped by the dragon and it was their job to slay the dragon. This would have been a good time to tell them that they could only hit the dragon in the chest with their foam swords, no head shots. Poor Dominic took his first battle blow to the face and that ended that. Upon better directions (totally my fault) he came back downstairs and let the boys try again. I have the best 9 year old ever.
I love this shot of all the girls crammed into the cardboard castle with their tiaras on. 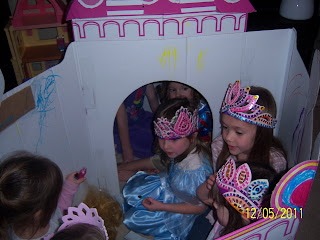 They slayed him good (though he did not get hurt this time) and everyone was able to go to the table to decorate their own cupcake (holy sprinkles batman!) and eat it..... upon decorating I spontaneously decided that ice cream just wasn't needed. Nobody seemed to care and it was one less mess. 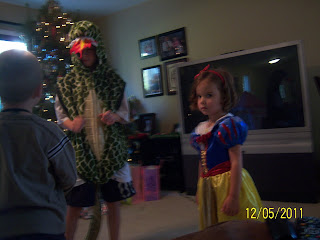 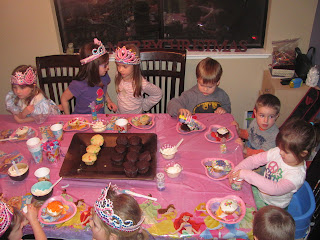 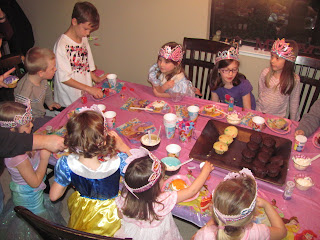 The on to presents! I could not believe how many polly pockets Penny got. She is set for life. So fun for her though, she really does play with them a lot. 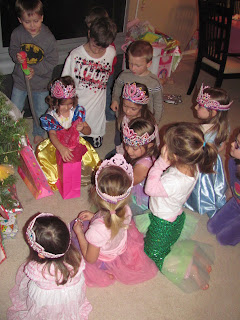 Dominic was really excited to give her this and purchased it over a month ago with his own money. He knew she would love it and she does. Again, her Polly Pockets get a lot of play time. 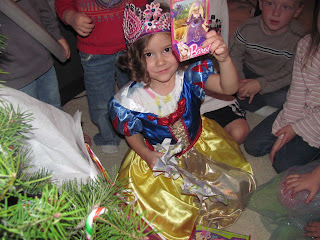 Michael ran around while presents were being opened and knew just what to do. He'd seen the boys fighting with the swords and went and slew all the adults in the room.
Penny Gma and Great Grandma joined us for the party. What fun we all had watching. 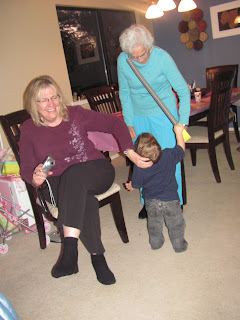 He was all giggles when Stacey got bonked. So funny.
Thank you Stacey for helping....who knew it would be so crazy! Well, I knew, but you were a huge help! 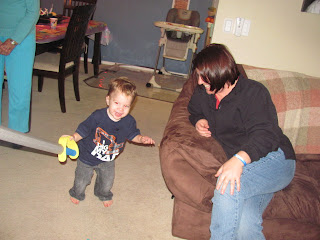 It was a fun day and I'm so glad we got to share it with so many friends! Happy Birthday Penny! I'm so glad you're growing into the beautiful fun little lady that you are. We completely enjoy you in our home and wouldn't have you any other way! You are our princess! 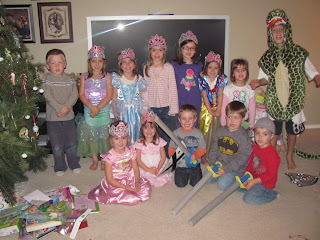