Well, we studied about the boy pharaoh , King Tut, a few weeks ago and so I decided it would be fun to make a mask of Dominic's face and make and paint it to look like King Tut. He had so much fun with this, he wants to do a bunch more and put them all on his wall. 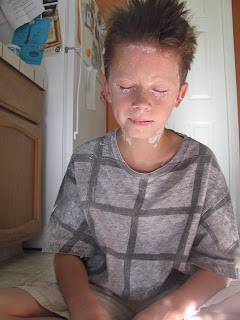 We first made the mold of his face with a roll of plaster cloth (about 4 inches wide and 15 feet in length cut into various sizes of smaller strips to cover different parts of his face) after applying tons of lotion (we should have used vaseline and it would have come off easier, but it was fine. I can't imagine vaseline on the face in huge amounts is good for the skin). We then used what was left of the roll (about half) to make up the rest of the mold for him to look like King Tut.

This stuff dries really fast and so it didn't take long before it was ready to paint (maybe 20 minutes total?) though we had some other things to do and came back to it a few hours later. 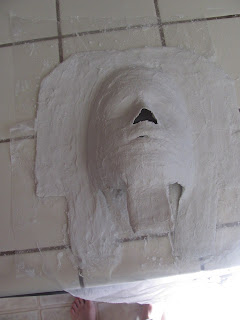 He designed what colors to use and where based on some pictures he had of King Tut and on what he wanted. 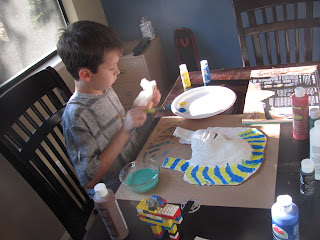 He added the black around the eyes to make him look Egyptian. He painted the white part of the eyes with glow in the dark paint. I LOVED seeing his creativity come out during this project. I've really learned how to just sit back and let him let the juices flow. I'm always floored by what he comes up with when I shut my mouth and tie my hands behind my back. He is very creative. 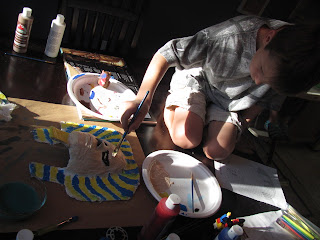 The finished mask. I helped him with the touch-up so that there was no white spaces left after he'd given it one coat. He learned a few painting techniques. I don't think he'll ever forget who King Tut was now. Its hanging on his wall in his bedroom. Again, he wants to make a bunch more and hang them all on his wall. I think this would be a great idea except walmart only had one roll of the stuff and I so I guess I'll just have to order some from online. =)

Penny wants to make one too, but she wants it to be with Dominic's face because she's freaked out to put that stuff on her face and make it harden. We'll see, I think with some coaxing, she'll do it and she'll be really proud of the finished product too. 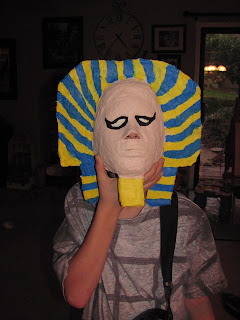 She painted a ceramic kitty while he painted his mask. 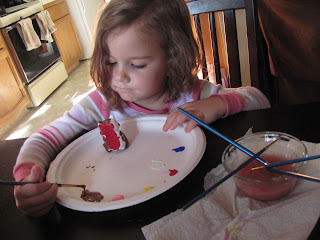 And Michael just sat around being cute and eating yogurt. Later, Penny lovingly gave him a piece of paper, a paintbrush and poured out some paint on his tray so he could paint too. Thanks Penny (though once she did it I just smiled and let him paint away. It was a great idea to put the paint on his tray, I just would have taken his clothes off first.) 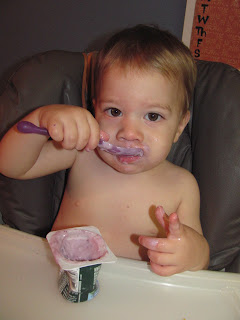 I have some of that stuff. What a fun project. Dominic did a great job!