Oh what an awesome Christmas we had. It started off with putting up the tree in early December. Sean had 2 of his wisdom teeth pulled on Friday and Saturday morning wasn't up to coming with us to get the tree, so I trudged out with 3 kids in tow to the tree farm to find that perfect tree. We found one after about 5 minutes but it looked a little tall, they assured me that it was okay, they could cut it until it was the right height. I'm never doing that again. Once they cut off some of the main bottom branches, the tree just didn't look right but we didn't know that until we got it home and in the stand. It was still a nice tree, but not the perfect tree that it was when we saw it.

Anyways, we put it in the stand and then waited till the next day, when Penny Grandma came to town, to decorate it. Sean took pictures while the rest of us decked the halls.

One of my favorite parts of decorating is pulling out all the old ornaments. The kids really enjoy this too and love finding these treasures of memory associated with each one. It was cute to hear Dominic tell Penny the stories that went behind some of the ones that she didn't know.....and she in turn told Michael a few as well. 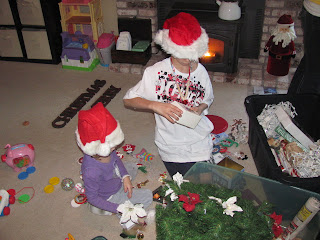 I was giving Sean, "the look" that he gets when he's in trouble for whatever the reason may be. =) (jokingly of course). My belly has started to show. I'm almost 19 weeks in this picture. 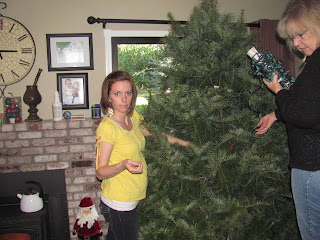 Penny Gma and I strung the lights on the tree but we were one string too short. I gave away all our extra white lights last year as we hadn't used them in years and years and were just lugging them around. Guess I should have kept a few more (oh well, a new strand was only like $2.50) 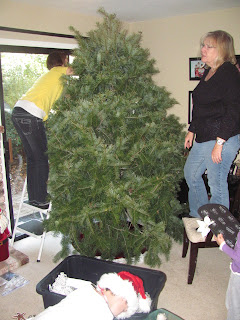 Dominic was good at spreading the ornaments out this year and not bunching them all in one area. He and Penny put almost all the ornaments on by themselves. 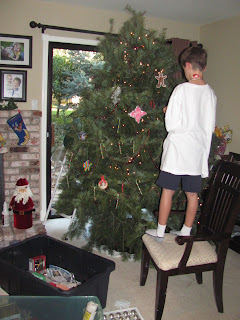 Penny was in Christmas heaven! 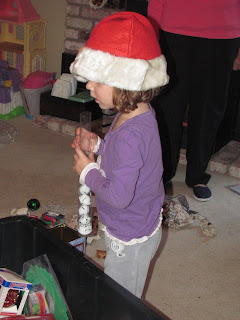 She insisted G-Gma put a few ornaments on the tree also.....and of course G-Gma always does anything Penny tells her to do. She just can't say no! =) Its cute, these two. 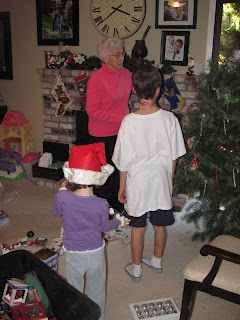 Dominic passed the torch off to Penny this year to put the angel on top. Its not that he didn't want to, but I'm not sure Dad could have lifted him that high without dropping him into the tree. Penny was quite proud. 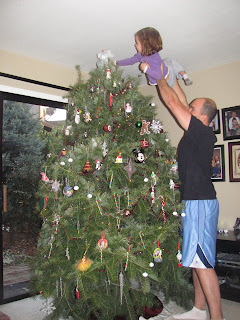 Here is the tree all lit (and the extra strand of lights finally put on). I love the look of Christmas in my own home. I find myself stopping and staring before I go up the stairs because it just brings so much joy and peace into my heart. Sean stopped and stared when going up the stairs for different reasons. He bought himself a new TV for his birthday and it makes our living room look a thousand times better (its the first TV he's ever purchased in his life, all the others were given to him by someone) 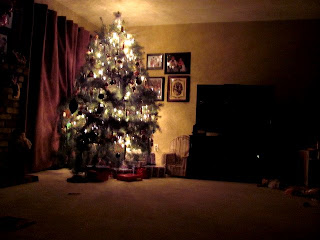 We had Christmas a week and a day early since it was Dominic's year to be with his Dad up in Alaska on Christmas day. Believe me, the kids didn't put up a fight and I have to admit....its kinda nice being all done when everyone else is finishing their last minute shopping. The stocking were hung and the presents were wrapped and all we needed were the kids to wake up! Sean and I stayed up much too late watching a movie and excited for our kids to open their presents (its hard to say who is more excited in our house, the kids or the parents) 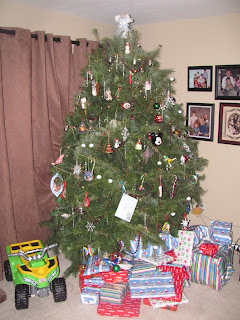 We don't let them come down until we say. We have to snap a few pictures and make sure we're all set. We like seeing their faces when they see all the presents under the tree. Michael had no clue what was coming, but it didn't take long for him to figure it out. 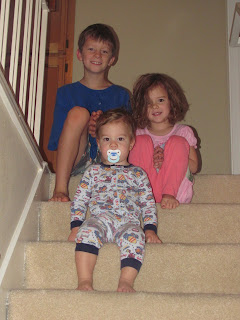 Before Stockings even, Penny insisted that Michael open her present. She's been so excited for him to open up the angry birds stuffed animal she got him. He was beyond thrilled and could have stopped there. But of course, the stocking had chocolate in them.... 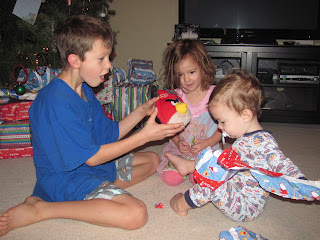 Nothing wrong with chocolate for breakfast on Christmas day =) Penny's favorite present came in her stocking......a princess electric toothbrush. She brushes her teeth like 4 times a day now....well worth the $5. 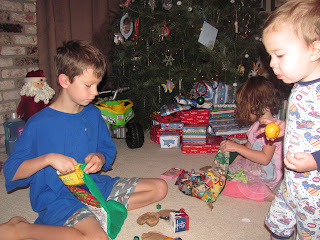 I thought Michael would see his truck we got him and not be able to contain himself, but we had to point it out until he understood that he could play with it. Then he didn't want to open anything else. 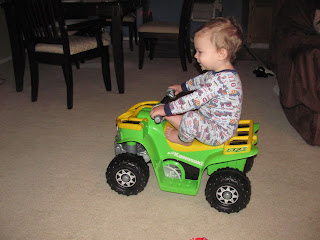 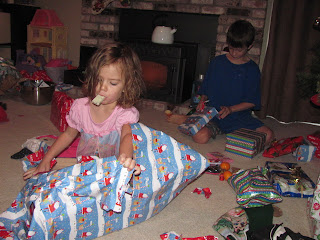 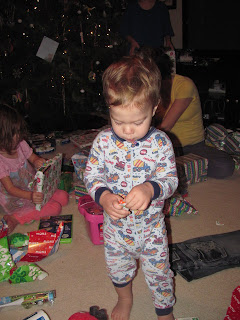 Had to stop for a milk break. 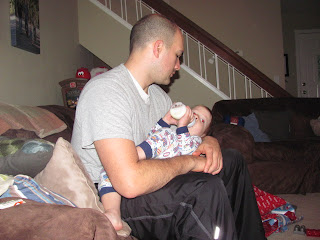 Dominic was completely surprised when he opened the XBox 360 with kinect. He'd been begging me for one and I had to play the mean mom and make up a story about how, "we don't need another gaming system in the house!" See, with the wii controllers, Sean can't play the games he likes to play with the kids.......so now we have both. Its been fun to see Penny play with Daddy on the lego games....she really gets to giggling. 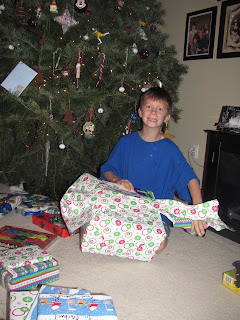 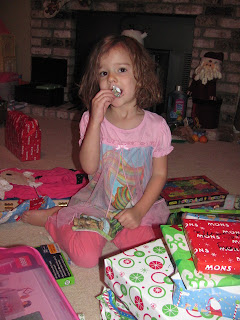 The tag reader was her big present. She loves it! 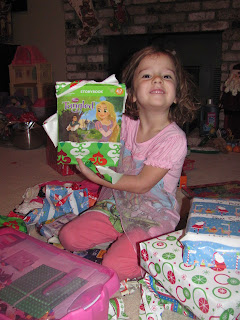 Michael has had so much fun with this pound and play toy. I really wanted good quality toys this year that would last for a few more kids and everything I got for them has been a hit! I wasn't sure if this would be too babyish but after a few minutes, I knew it was perfect. He LOVES this toy! 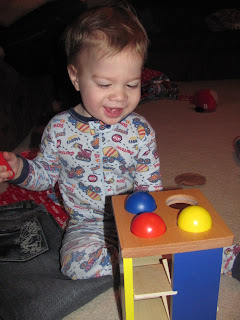 This girl and her sticky mosaic's. She can SIT and DO for hours. She is my crafty girl 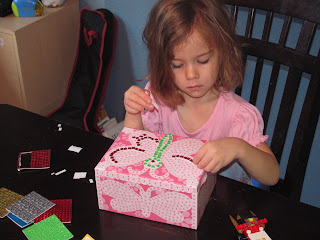 Dominic was "helping" Penny build her sets, but was actually doing them for her. I kicked him out because he said it was too hard to teach her and just easier to just do it himself. Ha! Not the point Dominic. I sat down and taught her how to build legos and how to use the pictures to see what was different and build upon the last step. She definitely needed help, but she had so much fun doing it. 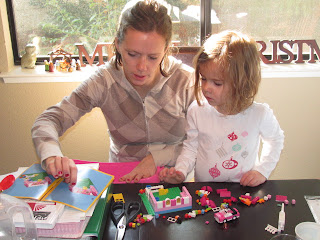 This was a neat toy that I got for Michael that Penny has put to good use too. This tool has different drill bits that all work within the same screws. It will drill them forward and into the case and backward and out of the case. The kids love it! I'm just glad we invested in rechargeable batteries a few years back. =) 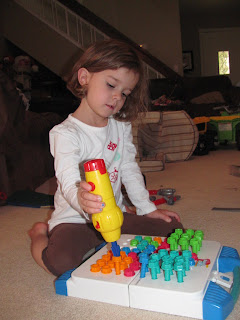 Another favorite thing in her stocking, her very own pink hairbrush. 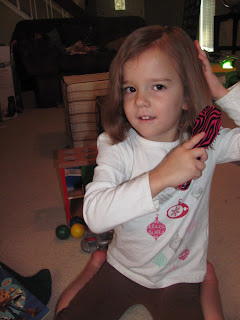 Snacks on the go. I went to the farmers market after opening presents and these grapes are so delicious! Michael ate almost half the bag that morning. 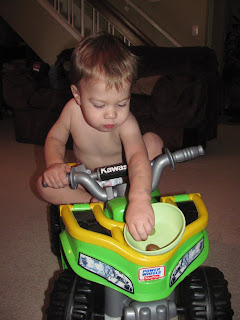 These robot blocks are awesome. I got a few sets as I wanted them to really be able to build high with them. They are lots of fun. 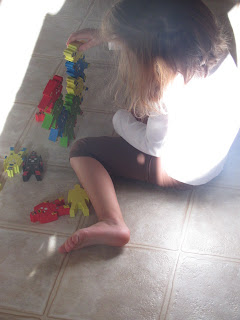 Daddy had picked Penny's lego character up over his character's head and Penny thought that was the funniest thing ever. She was all fits of giggles playing video games with her dad and said something along the lines of, "its a good thing I'm 4 now and can play with you when Dominic is in Alaska otherwise you would have to play video games all by yourself and that is boring." Touche Penny, Touche. 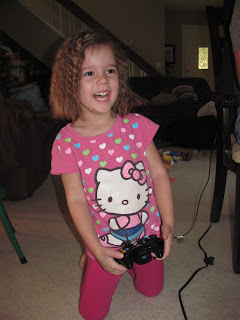 Michael likes to push the buttons on the tag reader. I love the chin resting in his hand. As Michael would say, "mmmmmmmm. So good!" 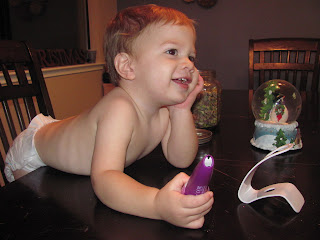 Dominic really was here that day, but somehow we missed getting any pictures of him playing kinect, building his bionicles, playing with his lego motors etc. There are some awesome pictures on the Xbox though as proof of what he did all day! =)  It took me 3 days to get to the bottom layer of Christmas and have it feel officially, cleaned up. Our house was well played in.


On December 25th, the actual celebrated Christmas day, I put out this lit Christmas present and in the morning we talked about the true gift of Christmas; Jesus Christ. We had a quick discussion about why we needed a savior and then watched a cartoon depicting Mary and Joseph and their journey to Bethlehem and the birth of Jesus, the angel proclaiming the birth to the shepherds and the wise men seeking him. It was actually, the perfect Christmas morning with no fluff of presents and messes to clean up. It was very calm and peaceful and the spirit was in our home.

I wouldn't mind having Christmas early every year and then Christmas day be like it was this year....just our one true gift of Christmas. 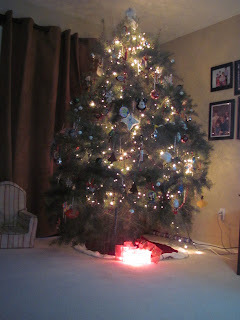 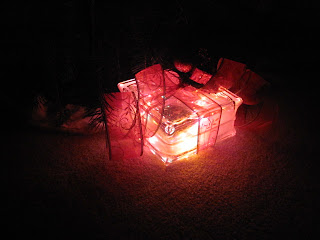 I asked Sean today (December 26th) if we could take down the tree tomorrow so that I could prepare the house for school to start next week. He looked at me with a sad face and said, "don't you want to savor the Christmas season and milk it till after new years?"

Of course I do. And so it stays. The lights on the tree are no longer on, but the box under the tree is shining bright and I like it.

I hope everyone had a wonderful Christmas!
Posted by Katie at 11:23 PM