Okay, so I'm finally blogging about Halloween. We had a cup of water spill on our other computer and it pretty much jacked it up and had to be sent in to Dell to fix (we had all the data backed up thankfully). However, our old computer didn't have Picasa on it anymore and frankly....I'm really busy so was grateful for the blogging hiatus. Anyways, Sean re-installed Picasa on the old computer so I really have no excuse to document our lives. Here goes Halloween:


Penny could not decide between two princesses. Trunk or Treating on Saturday she decided on Arial. I was able to put my $20 laminator we got from Costco to use. Can you tell what I made? 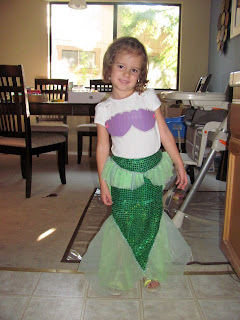 Dominic and Michael were black and red ninjas. Dominic picked these costumes out and did a great job getting them to match. If only he had chubby cheeks to match Michael. Also, he was nowhere to be found the whole night so I don't have a single picture of him at the church. We got there 30 minutes late due to his football game and so when we arrived he took off running to make up for lost time.
Now, don't you just love the cheeks on this ninja? 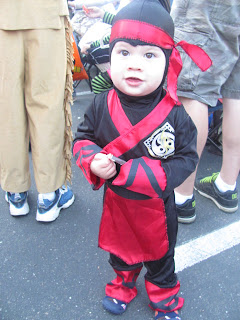 He loves this costume (I was surprised to say the least. I honestly thought we would end the night with hoodless ninja.) 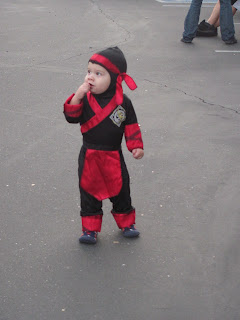 You should have seen the ninja jump from the kitchen counter to the table. It was incredible! Just kidding. But it is a perfect landing stance. 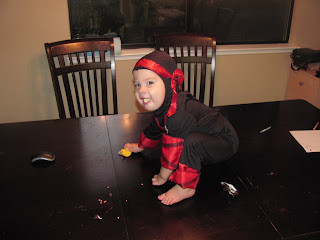 So on Halloween night we met one of Dominic's friends and went around with them. What ended up actually happening was that we started out together and the older kids ran ahead with the other adults and Sean and I trailed along slowly with Penny and Michael. It was perfect cuz we didn't have to slow Dominic down at all. I think we'll plan to do something like that every year.
Here are our 2 ninja's and our Belle (she switched costumes to a different princess on Halloween night). 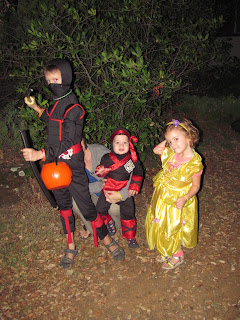 This was the last we saw of Dominic and his friends that night. =) 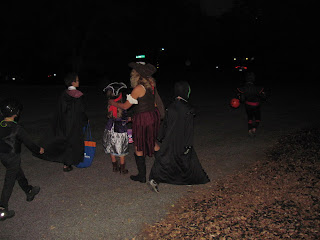 Sometimes a princess just has to improvise. 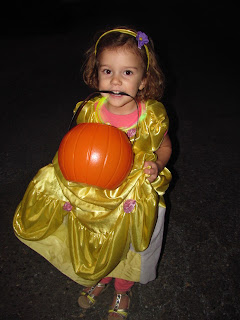 I love this little ninja 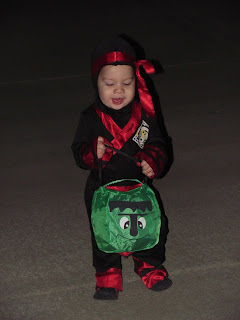 He wasn't so fond of Sean's mullet wig. He kept trying to take it off. 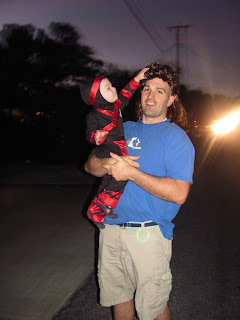 But Sean was relentless and wore it anyways. For some reason, I love this photo. My husband looks hot (even with a mullet) and my kids are a blurry dream. We had a lot of fun this night and the kids could not get enough of knocking on doors and getting candy. 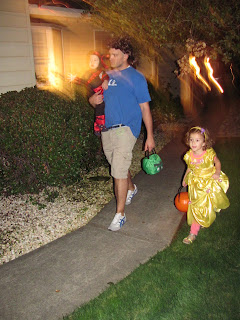 Sometimes though, you just have to sit down and shake that box of fruit chews! He randomly would sit down and look in his basket often. Other things about Michael. He insisted that the person at the door put the candy in his hand so that he could drop it into his bucket and then yell, "yaaaaaaaaay Michael!" He also tried to walk into just about every house as soon as they opened the door. There was another family right behind us for many houses that had a boy who was Michaels age dressed up as a cow. Michael followed him around trying to pet him. 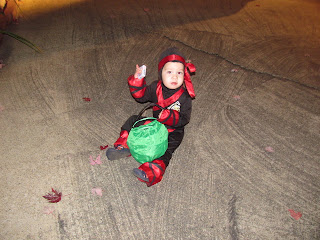 The other adults with the group that went with Dominic said that they were out and about and they saw a little girl in a Belle costume trip and fall and Dominic immediately sprinted towards her and helped her up to make sure she was okay. He was a little embarrased when he noticed that it wasn't Penny and he'd been talking to her like it was (with his big brother,  "I'm so sad you got hurt voice"), but still helped her up because, well....thats just the gentleman he's always been.
She's definitely our princess. 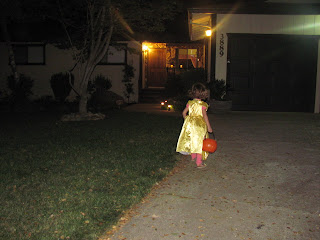 Again, you just got to inspect that bucket now and then and make sure nothing is falling out. 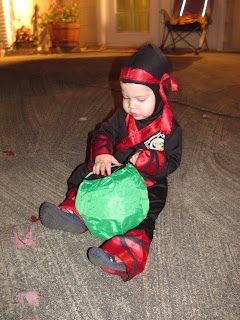 This was a really fun Halloween as all 3 of our kids had a blast. It took 9 days to eat through our candy. We pulled out all the really colorful candy (the kids chose the kinds with no influence from us) to use on our Gingerbread house in a few months. I think that will become a tradition every year as it decreased the candy we ate by a stuffed gallon sized bag.
Posted by Katie at 11:58 PM

That is the cutest little ninja I've ever seen!!!! That first photo makes me laugh! I can't tell what you laminated cause the picture doesn't get any larger for me.. you'll just have to tell me! :o)

cutest ninja EVER!! (dom and michael!) How fun... I love the straps on Penny's costume!

Looks like a fun time. I love all the costumes. Yours was hilarious.