I love Apple Hill. I love that we live so close to Apple Hill. If you've never been, its basically a community of farmers and growers that sell various types of produce all over the community. You can drive from one farm to the next and explore what goods they have. Some of them you can pick yourself, some of them pick for you and have displayed and ready to purchase. They have the most amazing array of apple donuts, pies and apple cider.

I haven't been fond of apple juice since I was a teenager due to drinking some once and then getting sick (not sure if those two were related or not). In the last 4 years, I've finally been able to drink it again and its yummy again (though I still find that I can't drink a lot of it)

Anyways, today we went to one of the farms and they have an animal section for kids to feed the animals and explore. There were only sheep, cows and chickens left as they are closing the animals portion for the winter, but we thoroughly enjoyed them just the same.
I mostly wanted to go because my kids aren't around animals enough and are quite timid (except Michael, he just came unafraid of animals).

I am proud to report that all 3 of my children fed the sheep without the insistance of me. They did it of their own free will. I was VERY proud of them.
He loved it when they "baaaaaaaaa" 'ed. He was fascinated by the sounds they made and I think was shocked that they actually made the sounds that he's seen on TV or that we have told him. Every time they bleeted, he bleeted back. So funny. 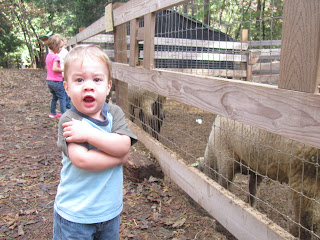 See how untimid? He's not an animal wisperer by nature (though he loves animals). I'm going to put him in horseback riding lessons with our homeschool vouchers to try to combat some of his phobia with animals. He is sometimes timid to pet a cat. Needless to say, I was very proud of him. 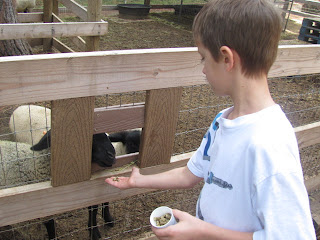 To feed the cows, stay far back and just toss the feed into the pen. Penny was not about to let the cows eat from her hand. Their moo'ing was quite loud and scared Michael, but from far away he thought it was pretty cool. 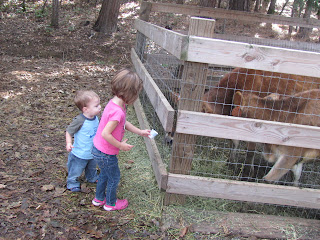 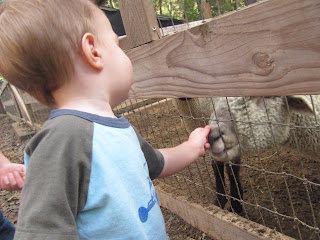 After the animals, we went to an apple orchard and picked 23 pounds of granny smith apples. I have some applesauce brewing right now that will be perfect for breakfast. I can't wait.
We learned a few things. You don't run through the orchards (perpendicular to the rows) because it breaks the branches, messes with the drip lines and overall its just not good for the orchard. You don't climb up the trees (for the same reason) You twist the apples off their stem otherwise it can break the branches. Penny patiently learned how to twist her apples off. She liked picking all the cute little apples. 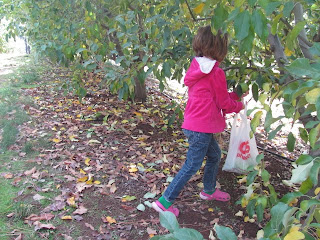 Dominic, on the other hand, found some of the biggest granny smith apples I've ever seen. We weighed his biggest one and it was .87 pounds. Eat that in one sitting! he picked a whole two bags full and could have picked tons more. I loved the excitement in his voice when he found a tree with a lot of them that he could reach. The words he chose were music to my soul, "I found apple heaven!"
Picking blueberries in Alaska growing up was a favorite past time of mine. Whenever we found a patch worth sitting and picking at for a long time, we called it blueberry heaven. Those were the best. 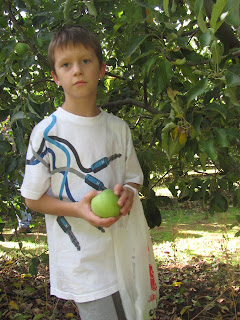 Sometimes its just too silly to pick and pick and pick when you have one already in your hands that you'll never finish eating anyways. This little guy had the time of his life and fell asleep only moments after pulling out of the orchard. 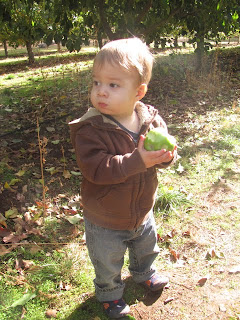 Thanks again Apple Hill! You are always so good to us!
Posted by Katie at 12:20 AM

I wish we had an apple hill. Looks amazing!!! Your kiddos are all so cute.