Mid September, I participated in the Ragnar Relay from San Francisco to Calistoga California, a total of 189 miles. We were a 12 runner team with each runner doing 3 different legs. I was runner 10 and had a total of 20.9 miles to run, my first leg being 7.9 miles, second leg 6.2 miles, third 6.8 miles.


I was a little nervous that I would be too fatigued by leg 3 but knew that I could do the first two and was hoping that the adrenaline of being in a race would be enough to get me through that third.
I knew I could only push myself if I felt good though, I had to remind myself.... I was 7 weeks pregnant. 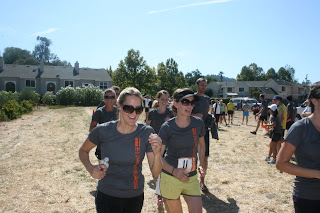 There were ragnar signs that marked the path and gave directions and turns. The best signs to see were the signs that said, one mile to go. That last mile never felt so good!

For my journaling purposes:

Run 1 was actually pretty tough. I started in the late afternoon around 3pm and it was pretty hot out (mid 80's) but REALLY windy. The first 4 miles were somewhat flat and then I knew at mile 4 I had a 1.5 mile climb. It was tough and the wind was blowing in my face the whole time. Running up a hill is hard enough and SLOW enough you really don't need gale force winds slowing you down. I felt like I was running as slow as a turtle but I was giving it all I got. There were a lot of men that were runner 10 and a lot of the long legged ones passed (in running they call it a kill) me. I killed 2 people, and one was walking, does that count? I had to pee really bad just before the hill and checked behind me to see that there was nobody in sight and dashed behind a bush. I'm pretty sure I got thorns in my shorts squatting and was peeved that I felt like I had to go as bad as I did when I really hardly went. Whatever though, the sensation went away and I popped out of the bush and went on my way. I finished my 7.9 mile run in 71 minutes.

Run 2 felt so refreshing and good. I started my run at almost 1am with the most uncomfortable headlamp imaginable. This run had no hills and I was grateful for that. When they asked if anyone had headlamps I told them I had tons and so I brought them along. I didn't stop to think that it wouldn't feel comfortable wearing a bulky camping headlamp that bounces around on my forehead with every step. ugh... you got penalized for not wearing one though so I just tried to ignore it. Anyways, I was scared that I was going to get cold on my run and wore my zippered hoodie, but after 1/2 mile into the race I pulled it off and carried it in my hand for the remainder (I thought about throwing it on the side of the road and bidding adieu but I love that hoodie!) It was so refreshing to run at night and I ran really really fast for me (considering that I'd already run once that day!). I finished this run of 6.2 miles in 50 minutes and killed 5 people.

Run 3 It was a hot morning already and after my second run, my toes were in a lot of pain. 4 of them were blistered up really bad around the ends and into the toenails. It was really ugly and really big. Other than my toes though, I felt really really good. I told the other 5 people in my van to stop for me at 2 miles and then again at 5 miles and if I gave them a kill sign it meant that my toes were hurting way too bad to continue and I wouldn't be able to finish. They could see how bad my toes were. I started out running really slow, I thought. I could feel every step in my toes. I borrowed a team mates garnet watch so I wouldn't have to wonder how many miles I had left and I could gauge my pain with how far I had left. I remember that first mile being really long and attributed it to the fact that I'd already run 14 miles that day. I trudged through miles 2 and 3 feeling pretty good actually (my body had ignored the pain from my toes and they didn't really hurt that bad anymore). I picked up the pace a little knowing that at mile 3.4 I was halfway done and could start telling myself I'd already run farther than I had left to run. I killed a long legged runner (he wasn't walking), this felt good. I passed tons and tons of vineyards and the scenery was amazing! There were some grapes right on the side of the road and had I been able to see them ahead of me (instead of as I passed them) I would have tried to snitch one. I didn't dare stop moving my feet. I had 2 starbursts in my hand for fuel and tried eating one but it made me not able to get the air I needed so I quickly swallowed it and drank some water vowing not to eat the other. I passed it off to a girl who was walking (my second kill). All of the sudden, at mile 4.5 I saw the '1 mile to go' sign. What? My run was supposed to be 6.8 miles. I was somewhat relieved, but also felt gypped. "I'm doing fine! I don't need a gimme here!" I picked up my pace again and almost sprinted into the next exchange point immediately inquiring why the garnet said 5.5 and I thought I was running a 6.8 leg. the owner of the garnet chuckled....her stride is obviously shorter than mine and it was set to her stride....so for every mile it told me I'd run, I'd actually run 1.3 miles. Thus, when it told me I had run 4.5 miles I had actually run 5.8 miles and thus only had 1 mile to go of my 6.8 mile leg. It was a nice treat to be tricked in such a way. I finished my 6.8 mile run in about 65 minutes. I don't know exactly because my phone had died and I didn't time it but it was right around there. I felt really REALLY good after that run....but my toes hated me. 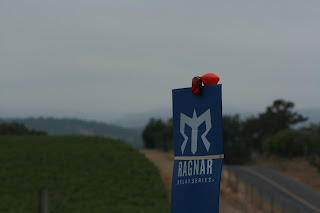 So, I made all 3 of my runs and with only 5 horribly blistered toes to prove it. Its been almost 3 weeks since this race and I have lost 4 of those toe nails (surprisingly I already have 4 new ones). My feet are not pretty. But, it was worth it.

And, we finished 74th (or something like that) out of 149ish. We weren't there to win it...just finish. But, my brother had a group of friends in the race and, they won our mixed (boys and girls) division. That's some crazy running right there. 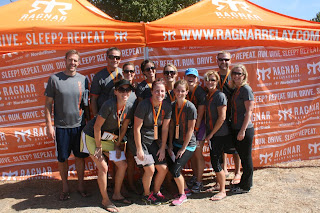 Notice I don't have sneakers on. I could not get my feet back in them. But, look at that smile! 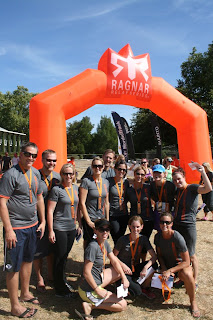 Thanks Sean for taking care of the home front so I could go do this!
Sean's mom came and helped watch the kids on Friday so Sean didn't have to take a day off work and then Sean had all Saturday to play with the kids. When I got back into town early Saturday evening around 5 or so, he was ready to have me home and a bit cranky. Poor guy was just hungry and tired I think.
It still makes me laugh hearing him tell me why he was cranky.......and what was I?
On nothing, I just ran a FREAKIN RAGNAR, but here let me help you with that! lol
Just kidding sweety. After an hour or so playing at the pool with the kids we came home and I showered and went to sleep.......that was the best 11 hours sleep I've had in a LONG time.
I've never slept so good.

I'm not sure I ever need to do one again though.
1 is good.
Unless its with my family. *hint hint*


I bought a new pair of shoes and my toes are happy with me again. My brother convinced me to buy a pair of Merrell's and I think I'll love them. I haven't actually run in them yet. =) My toes have just barely forgiven me so I've not been in a hurry.
Posted by Katie at 10:33 PM

That is so awesome Katie. I'd like to do that one some day... when my kids are a bit older.

Wahoo!! Way to go!! It's time to organize that family one :)

Except I'll be 38 weeks pregnant.

Oh, my goodness! I can't imagine doing a run like that right now. way to go, Katie!