I love Michael's little toes. Actually, I love babies toes in general. They just look like little edible peas lined up so perfectly in a row waiting to be nibbled on. 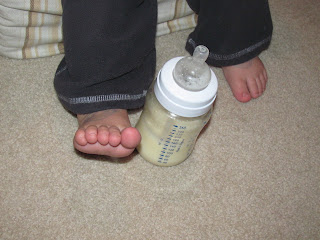 I bought this frame at Michael's and absolutely love it! I think it was only $20. A steal of a deal if you ask me! Its well crafted. Michael loves to stand in front of it and point everyone out. I often hear him in the hallway naming people and know he's standing in front of the picture frame. =) It took me a long time to narrow down which pictures I wanted to put in it....it was hard to pick out only 21! 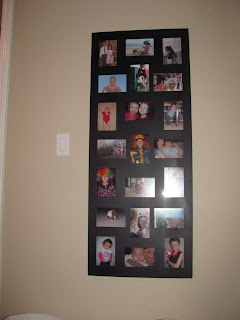 Following in his brothers footsteps. Keep it up Michael, he's a good role model. 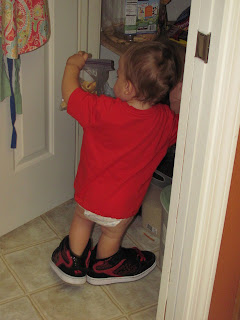 Penny was being kinda grouchy and resistant about having to put away the silverware so Dominic ran out to the garage, grabbed some silly hats and started playing silly music in the kitchen to liven up the mood. It totally worked! He's always full of great ideas to keep everyone happy. We love having him home. 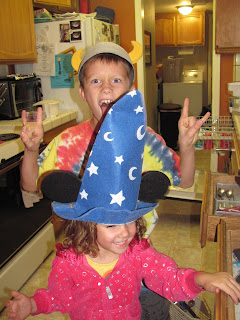 Penny writes and colors all day long. So, let me explain her train of thought. She wrote her name and then circled it. Then she wrote my name and circled it. Then she said they looked like bubble names. She then wrote the word pop. Then she remembered that she has a balloon in the garage and said to me. Mom, if it pops I still want to keep my balloon in the garage. Later I looked over at the board and knowing that kids at her level spell phonetically began sounding out her letters and noticed she wrote, "I wil wont it." Translating to 'I will want it."  She was writing down that she would want the balloon after it popped. I am continually amazed at how her brain soaks things up around her.
Lately she has also been writing math problems on everything like 4+1= 5 and 2 + 2 = 4 etc Sometimes she actually makes up a real math problem and sometimes its just numbers strewn together to look like a math problem. Its so fun to see her progression though. She doesn't start kindergarten for 2 more years. My question is, if we don't homeschool her in 2 years....what on earth will she do at school? 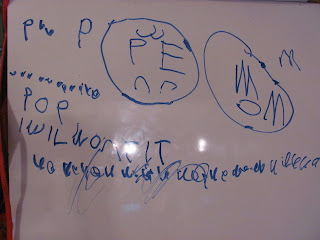 Dominic has been learning to type this year. I purchased this typer on Ebay (we used one like this when I was in 5th grade). I wanted something that wasn't on the computer while he's learning it and rather something that he could just pull out and focus on without being distracted by, "can I play video games when I'm done?" since thats usually the bulk of what he does on the computer. Anyways, we're 7 weeks in to having this dandy machine in our home and he can type (without looking) home row and top row. He hasn't added the bottom row yet. But today he did 17 wpm with 91% accuracy. I'm pretty darn proud of this guy. 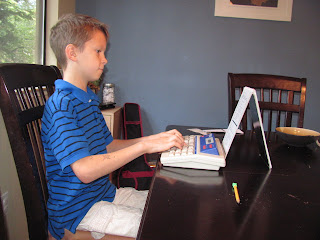 So, its not all THAT exciting to watch but I'm so proud of him I couldn't help but share!
He's also learning to play the guitar. I'll have to record him playing a few songs. I'm teaching him (though I don't play the guitar, its been fun to learn myself) and he's self teaching also. He's doing really well. Next semester I think I'll actually have him be with an instructor. He LOVES it!
Posted by Katie at 11:12 PM

I really could have used Dominic and his awesome ideas to liven things up around here today; the boys were not in very cheerful moods. What an awesome big brother!

And way to go Penny, what a smart girl!