The Thursday before summer was over, we took the kids to Six Flags Discovery Kingdom about an hour away. Dominic had earned a free ticket last year with his reading so we headed off to take the whole family. We love this theme park!

They not only have great animals, but great rides too and if you pick the right day (so the crowd is small) its the perfect outing. 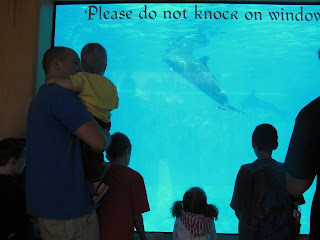 The dolphins are always one of my favorite mammals to watch swim. They just move so gracefully and always seem to have a smile on their face. Michael loved seeing all the fishies. 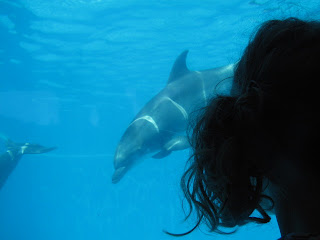 These chubby feet are so yummy. 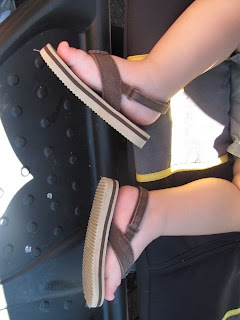 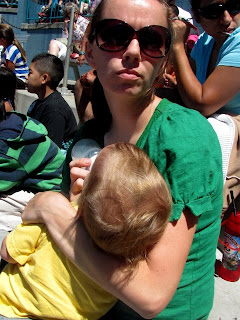 She started out really cold, with babylegs and a sweatshirt on (It was probably 75 degrees) but quickly got too warm sitting in the sun. Her hair went from okay to bad in the 2 seconds it took to get her sweatshirt off. 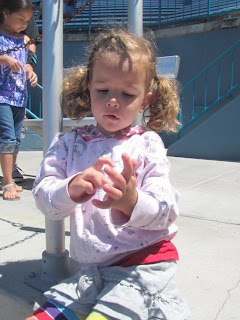 Dominic brought his friend Austin along and we were so glad that we did! It gave him a chance to play and go on more rides. He would have had fun without him, but it was nice for him to not have to wait for us to tend to the kids at every ride. 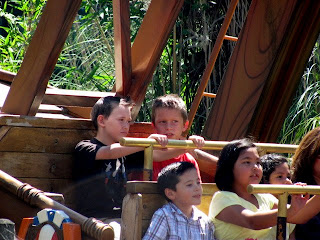 Penny and Michael rode the hopper (frog). She went on it a few times while he was sleeping so she already knew how fun it was and started telling him all about it. He didn't care for it too much, its bounces were a little too jerky for his liking. 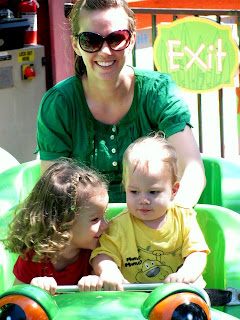 It was fun to see him do all the signs for all the animals that we saw. Here he is signing giraffe. 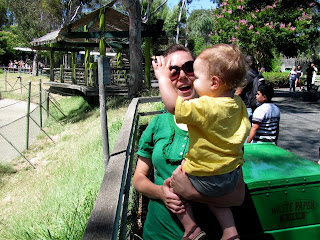 The Butterfly sanctuary is my other favorite place in this park. Its a huge room that is lush and humid and full of butterflies from around the world. My hands were too full chasing around kiddos (Sean got to hot and left after a few minutes) that I didn't get anymore pictures. At one point Michael was playing with something on a tree branch. When I got down to his level, I noticed that what I assumed was a leaf, was actually a butterfly disguised as a leaf. He was touching it so softly (thank goodness, you aren't actually supposed to touch any of them).
My favorite ones were the tigerswallow tails (those were my childhood favorite) and the one that was decorated to look like the eye of a bird. There were some really bright blue ones that Penny really liked.
I would love to have a butterfly room like that one. 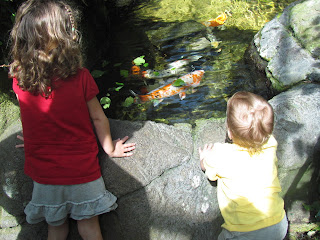 We brought Michael's walker along so he could cruise without falling and boy was he cruising! He also has an obsession with sunglasses and so he wore his around for a bit. 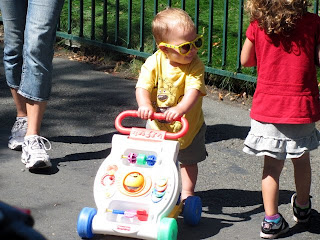 Penny liked the walking escalator that took us through the shark tunnel. I wondered why the sharks didn't eat the other fish but couldn't find anyone to ask. My friend Lisa was able to ask though and the rangers said they didn't eat the fish because they always cut the heads off the fish they feed them so they have never made a connection of food with the fish swimming around them. I thought that was really interesting. 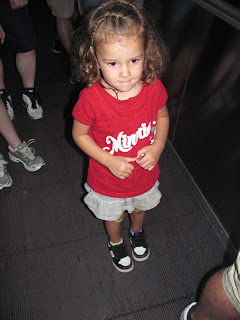 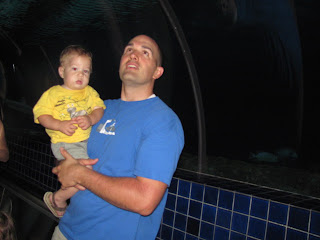 Penny wanted one of these ginormous suckers and I obliged. She was very good about sharing it with Michael who needed a bit about every 3 breaths. 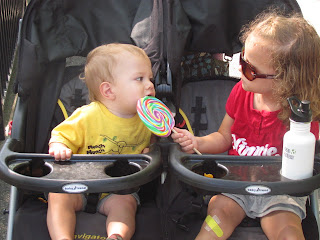 Dominic and Austin waiting in line at the Tony Hawk ride. Apparently it would be more fun if you were taller, they jerky corners caused them to bonk their heads on the side of the basket they were in. 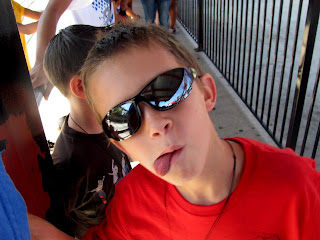 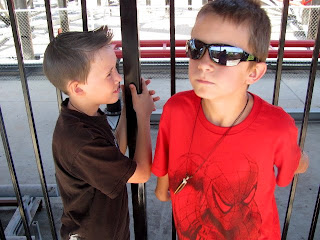 Penny found this sylvester drop ride absolutely thrilling. She was a little nervous the first time she went, but by the 3rd time on the ride she was putting her hands up and having a blast! I love this smile! 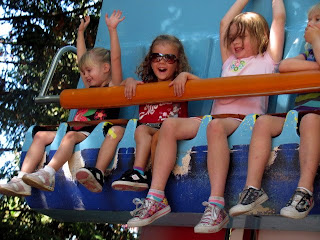 Dominic got soaked in the acme playground. 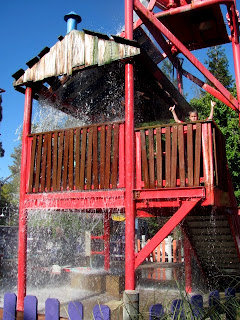 Michael was so close to falling asleep in the stroller toward late afternoon. He had his foot resting up like this for forever but he never closed his eyes. 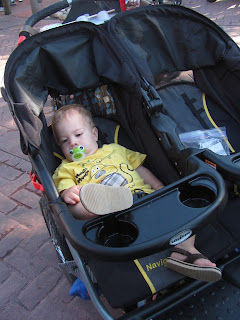 Even though we missed her face in this picture, I absolutely love it. The bandaid, the chicken legs, her hands in the air, the dimple in her chin that lets you know she's smiling and the spots on the ride where the paint has worn from all the kids that have been on it before. I just love this picture! 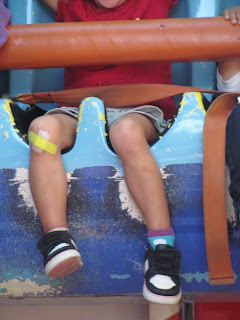 Dominic was a good sport and went on it with her too. He said it was actually a pretty fun ride. It shot you up quite a ways (slowly) and then dropped you, free fall, in three sections back to the bottom. 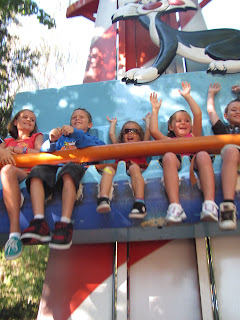 Michael loves to play with Dominic. 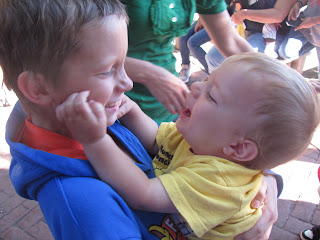 These two could not get enough snacks. It seemed like they were constantly eating, and well, they were! 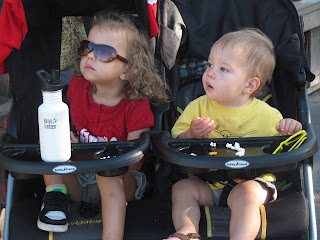 This is my favorite place to nibble on my kiddos. Its always so ticklish. 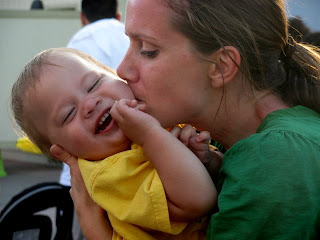 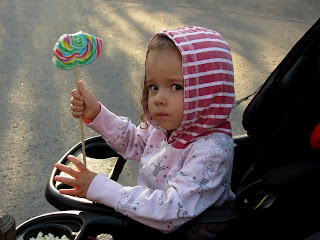 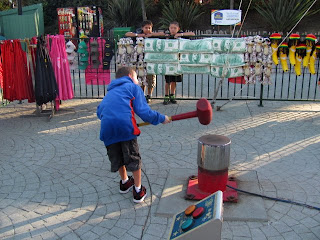 I was brave and touched the manta rays. They were surprisingly squishy, like Tofu. 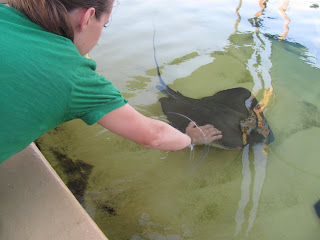 It was a fun day at Six Flags. We didn't buy season passes this year because we thought we wouldn't want to go very many times, but next year......we're so game.
Posted by Katie at 10:23 PM

so so so fun! The chubby Michael legs and the sunglasses on Dominic and Penny are my favorite :)

SO FUN! I miss being able to go to Sea World or the Animal Park... or Legoland..... Alaskaland just doesn't cut it! :o)