After a long awaited 57 days, Dominic came home from Alaska. He had a lot of fun, but we were just anxious to have him home again. Michael and Penny missed him so much. Penny always talked about all the things she wanted to do with him when he got home. Of which, mostly it involved playing Polly Pockets. The picture that she had in the wood slats above her on the bottom bunk came down the night he got home. Her words were, "I remember what he looks like now because I have his face here with me."

Michael was often found pulling Dominic's picture to the floor and laying on it while saying "aaaaawwwwwwwww, aaaaawwwwwwwwww"
He lights up at the real deal now that he's back.

It was sad to watch, but it made my heart happy to know what a good brother he is to them and how much they missed his presence.

Now, we're back to the normal daily life. We had a few blissful days with no fighting or territorial disputes over toys and things. Penny got over that real quick and after two days has begun to be a stinker to her idol  brother again..... but she is still found snuggling with him at the days end.

We got some balloons on a stick and Penny had planned to hide hers behind her back and surprise him.
Michael was checking out the airplanes coming in and out. The airport would be a fun outing for him anytime. 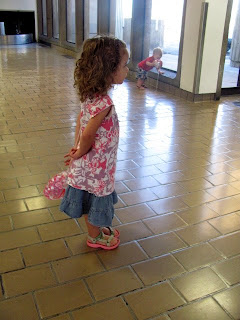 They both anxiously waited at the bottom of the stairs and we fortunately only had to wait for about 5 minutes before he came bounding down them with his arms opened wide! 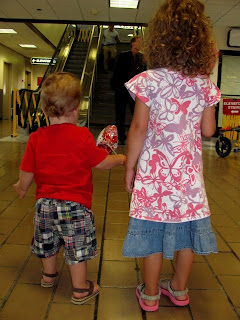 Michael was immediately excited to show him the balloon he had. Penny was all giggles and smiles and hugged and hugged on Dominic. We were totally in the way of people coming down the stairs but whatever, they had legs and could walk around. 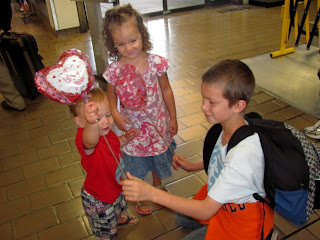 My sister Eva brought Dominic home and had a flight leaving for home (Idaho) 6 hour later. In between, we brought her home to torture her with things like face painting and cinnamon rolls. It was so intense, Penny needed to wear her bicycle helmet. 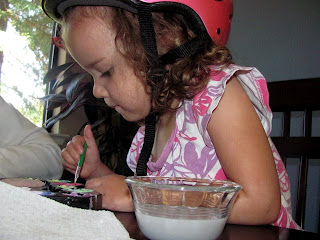 Eva's such a good sport. 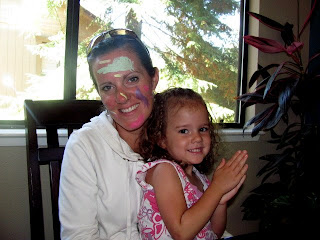 She then did an angel face painting on Penny. She left this on all day long. 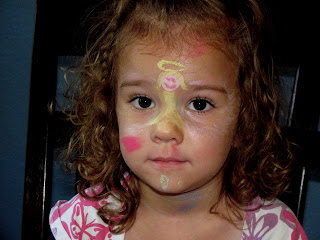 It feels so good to have all 3 of my kids under one roof again. All the laughs, giggles and even arguments are music to my ears (though the arguments seem more like heavy metal music and are hardly enjoyed). At the end of the day I feel so blessed. 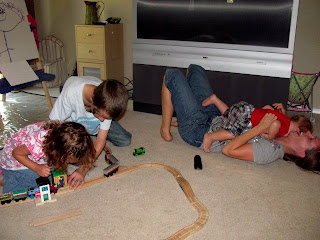 Sean even got in some good wrestling time. 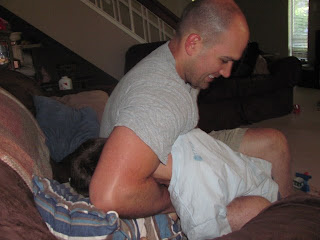 And no post is complete without a messy food picture. Here I asked him "Where is Michael?"
He hides his face 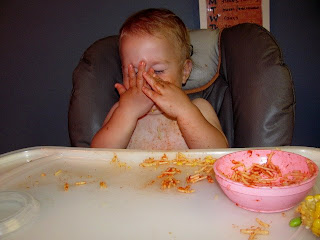 and then says (surprise surprise), "Boo!" 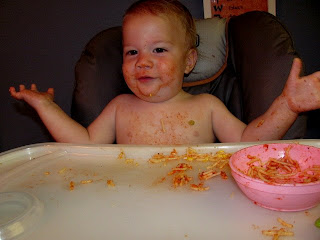 Love every second of this! So adorable.

So glad your family is back together again. We got our olders back a couple weeks ago. We are still in detox, but happy to be togther. Enjoy the rest of the summer as a whole family!

Yay! Glad you are back together. Good to see they are a bit normal, too with the normal sibling stuff. You guys can't be TOO perfect, you know! HEE HEE!

Face paint rules :) So happy you're all back under one roof!