We were all packed up to go camping on Friday and for reason I don't wish to list here (I hurt the feelings of some pretty important people in my life for deciding not to go) we went 1 mile away to Great Grandma's and set up our tent in her backyard. The kids were dead set on camping and I so was I.

Our car was all packed with food, toys, supplies and clothes.
Did you know that you can't make a reservation in California on any state campsite without 48 hours notice? We must have looked pretty silly having a fully loaded car and pulling into Beals Point at Folsom Lake to try to get a first-come/first-served campsite only to be told that they had none available. 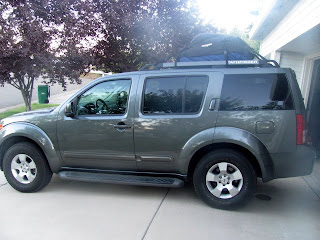 This was after I took some things out. 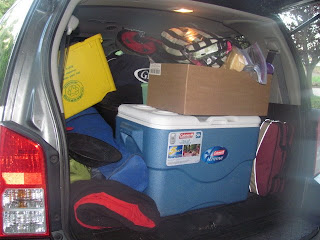 And here is where we parked the tent. I really wished it would have worked out to go camping in the Mountains like we had planned and this certainly did not cut it for me, but my kids love sleeping in a tent no matter where we are and Great Grandma sure enjoyed the company (though at 96 she didn't join us for the night in the tent). 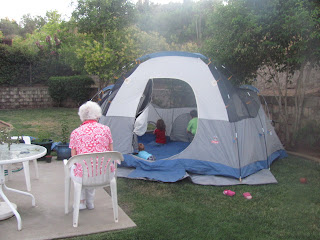 They played and played after it was set up. Michael loved the sound it made under his feet when he walked around. He likes playing this game where we rest our chest on his feet and then he pushes us away. He was playing it with Dominic and in hysterics. It was funny. 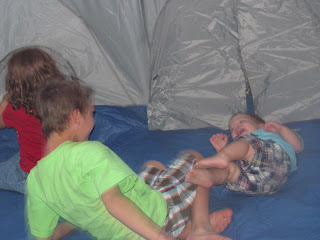 So, Sean and Michael went home to sleep so that at least one of us adults could get a decent nights sleep and Sean hadn't had much sleep in the last 2 days already. He was running on empty and was in bed before 8pm.

Michael uses his rainbow whale that Dominic got him as a body pillow every night. I thinks its so adorable how he snuggles it under his body and tucks his hands in. 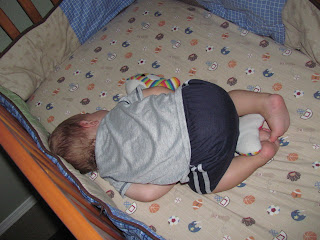 The next morning, the kids were still snug as a bug come 8am. Dominic got a little cold but was too lazy to reach above his head and grab his sweatshirt so he just slept in the fetal position inside his sleeping bag. Silly kiddo. Penny kept coming out of her sleeping bag and I......well, I should have blown up the matress instead of sleeping on the hard ground. 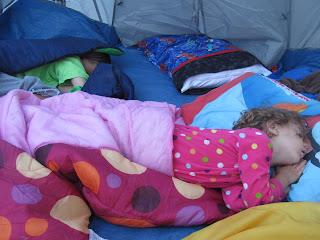 WARNING: This photo may scare you. I woke up and thought, "Man. I feel like I just got run over by a truck!" That is the precise moment I snapped this picture and upon inspection decided that I really must have gotten run over by a truck. I was so tired that whole day! 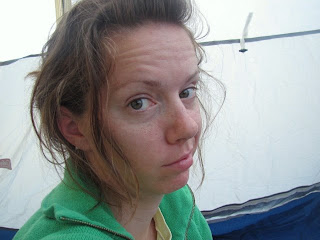