Swimming weather is finally here!!
Its taken so long to get warm and its not very warm at night yet so some pools that aren't heated still are pretty chilly. But, we've been enjoying our gym membership and their pool!

This week is Dominic's only week of summer with us so we had a pretty intense bucket list, and it left for a very full week. We've been run ragged but its been so much fun! On the list were:
Swimming at the gym
Fishing in Tahoe
Horse Show Expo
Rivercats Baseball game
Birthday party at John's Incredible Pizza
Yosemite (scattered thunderstorms cancelled our plans)
Late night Movies with lots of popcorn (carmel, kettle and buttered)
Stay up late night with friends (one at our house, one at someone else's house)

So, we got all those done except Yosemite.....

Still birthday cake and ice cream with family tomorrow and then he's off
for 8 . LONG . WEEKS.
We're gonna miss our bud. I definitely don't like this part of divorce but I know its healthy for Dominic to spend these long bouts of time with his dad. He's a great kid and such a huge help around the house. In fact, on Monday he was my crazy helper. All day long he did chore after chore after chore after chore. I told him he needed to do 2 chores but after his 2 were done he asked for more. Not even kidding this is what he accomplished on Monday; empty dishwasher, cleaned and vaccuum downstairs, cleaned kids bathroom toilet and sink, helped clean garage, put away laundry, watched Michael. It was awesome how much I was able to get done with someone helping me!
Anyways, we're going to miss him terribly not just because he's a good helper but because he's a great son and amazing brother.

He was really excited this year to get a rash guard shirt. It means less sunscreen and he says it keeps him warmer. 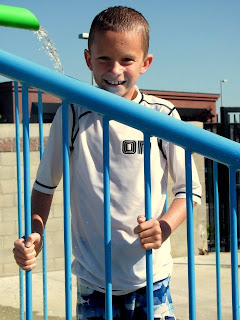 Penny Gma got a rash guard outfit for Michael. I do like the idea of more coverage on their skin without having to use so much sunscreen. So, this is size 3T. Can I say chunker? (he's really not that big anymore, just they size things weird) 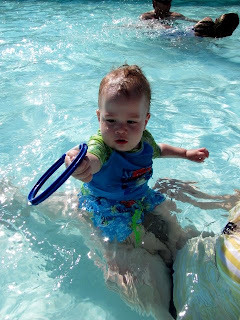 Penny is a fish in the water. She loves to go under and try to swim. This year, with enough practice and coaching from myself, she should be able to swim unassisted for a short distance. I'm looking forward to that. She's a pretty confident swimmer already but she has her moments of being afraid which I think is healthy. I think a healthy respect for the danger of the water is good for kids. She loves this new swimsuit she got this year. 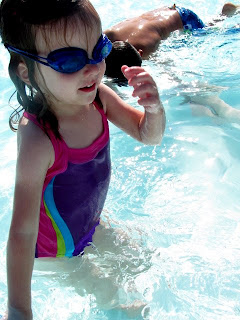 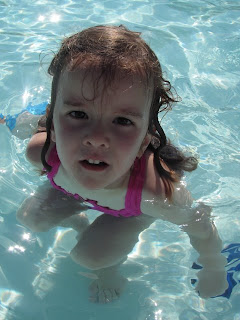 Michael doesn't particularly mind going underwater. I wouldn't say he loves it, but he doesn't cry when it happens and he will often try to put his face under himself. If I hold him on his belly and tell him to kick he gets his little legs a-movin! 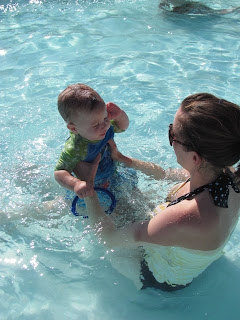 Snack time is a must after swimming (even for mommy)! 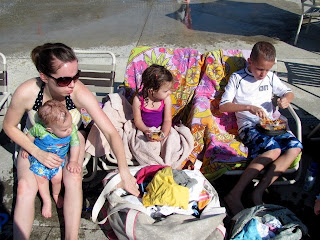 Sorry Sean, I should have gotten a picture of you. Sean is so good about taking pictures so I can blog them. If it weren't for him, I would have no pictures to blog. So, just because you don't see him.....doesn't mean he wasn't there! Someone had to be behind the camera.
Posted by Katie at 8:08 PM

I can't wait for summer too! We have one more week of school and then we will party like this as well. :)