My friend made a last minute call asking me if I could sew a fat suit for a costume she needed for a character in a skit at girls camp. I've never made a fat suit before but after a couple minutes online knew it shouldn't be too challenging.

My original idea of using nylons for the skin didn't work, but these off brown yoga pants worked well enough. Michael did not like it when I tried it on. I think it hid his feeding station too far underneath too much stuffing. 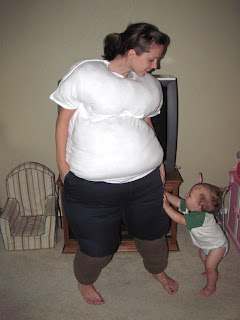 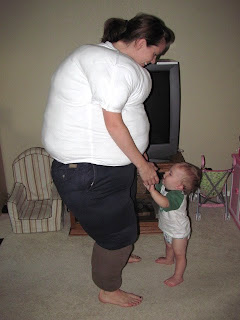 Penny really liked the top half. 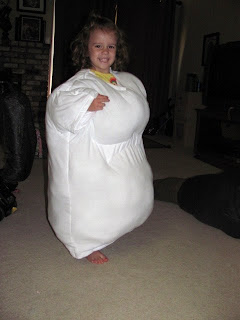 The top part was actually really easy and only involved 2 XXL t-shirts and stuffing. I sewed the arm holes and the bottom hem of the shirts closed then I laid those two shirts on top of eachother both facing up and sewed the arm-to-neck seam as well as the underarm-to-waist seam.
The shirt on top draw a rounded large W for the moobs and a frowny face underneath a few inches for the gut with a pencil. Sew only that shirt (not the back shirt) along those lines making sure that you have room on the left and right to pass stuffing through to the bottom.
Stuff both the front and back with poly-fill stuffing till it is as stuffed as you want it and then sew the neck lines shut at the proper neck seams. For the front shirt only you will have to trim the neckline to  match the curve for the front of the shirt (as it will still have the back of the shirt showing even though its being used as the front) Instant fat shirt and should take less than 30 minutes.
The pants were a little more involved.
If you decide to tackle pants and you want directions let me know.
Posted by Katie at 3:12 PM

omgoodness I saw this picture of you in the fat suit and started laughing my butt off. It is so hilarious with your tiny head sticking out of a huge body. :)

Good job on the suit, it looks realistic. You are so creative.

Hi I saw ur post n im going 2 make a fat suit for halloween n I was wondering can u tell me how u did the pants? Thank u so much

Okay I hope this is helpful. My brain can piece things together without directions but the directions don't always translate very well onto paper. I didn't take pictures of the process.

Cut large pants (not yoga pants) to the length you want them. Cut a 3 inch strip off the top of the part that you aren't going to use and sew it back on to the pants. Iron this so that it goes back up into the pants and creates a nice seam but don't sew a hem.

With right sides together, hand sew the shorts extension (that you previously sewed and ironed up into the shorts) onto the yoga pants where you want the shorts to stop and below the line where you hand sewed the calf. Repeat for both legs.

See? That was easy right?


Seriously, if you can read and understand those directions you should go buy yourself an ice cream.

katie.matteson@gmail.com if you have any further questions.

You want to yoga pants to be rather large so you can get a good sized calf but not so large that it is bigger than the shorts you will be putting them inside of.