Its crazy to believe that I have a 9 year old. Before he left for Alaska we had his birthday party. A few months previously he stated, "If I could have my birthday anywhere I would want to have it at John's Incredible Pizza." To which I replied, "I'm sorry Dominic, thats just way too expensive but don't worry, we'll have a great birthday party wherever we decide to have it."
Then a week later John's Incredible Pizza gift cards were half off at Costco....so for $50 I could get $100 worth of gift cards. We figured the math and decided that we'd probably spend the same as last year and not have to clean up afterwards.....and he'd get his dream birthday party (we usually do kinda big parties for Dominic cuz its also his kickoff with his friends before he leaves for the summer) So, we went for it and it was a LOT of fun.

He invited about 16 friends and 13 were able to make it. It was utter chaos but we chose a Thursday  night in hopes that it woulnd't be very busy and we were right. We were close to the only ones there.

All the boys hardly ate dinner (all you can eat buffet), they went straight for the all you can eat soft serve ice cream. Needless to say my car full got carsick on the way home, including Dominic. Live and learn boys. 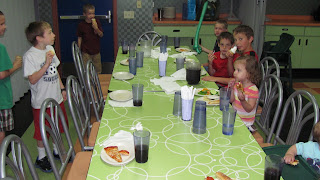 This was kind of an awkward moment with Incredibear but the boys were silly and didn't care. The girl presented him like they were supposed to scream and shout in adoration and all the boys just kind of looked up and grunted with disinterest. It was really funny but they were good sports and wanted to pose for a picture. 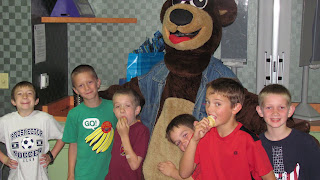 Our host made balloons for everyone. Penny had a flower bracelet and Catherine already had had her make her a giraffe and then decided she wanted a bracelet too so the girl just made her giraffe into a bracelet. Catherine thought that was pretty silly, she could not stop laughing about it. 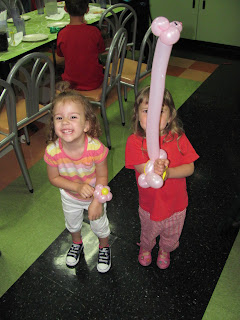 The girls enjoying their ice cream. 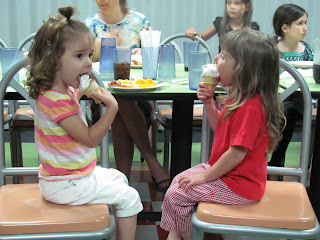 Michael ate quite a bit of breadsticks, corn, peas, mandarin oranges, pinneapple and whatever other randomness we put on his tray. 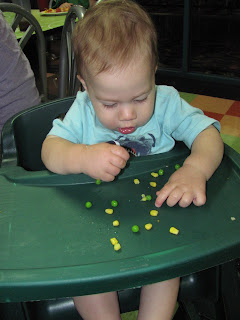 Dominic opted to use their dessert as his birthday cake instead of bring a cake. Worked for me! 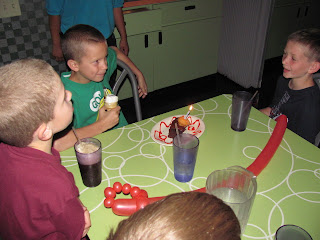 He got some great presents along with a few duplicates that he was able to take back and get one big lego set. He was in HEAVEN! He really has an awesome group of friends. I love Brian's face in the background as he's being sliced in half by Bryson. 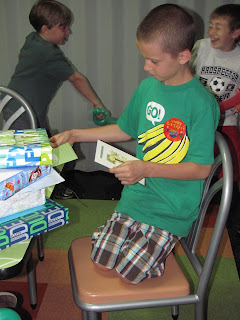 See how many balloon swords were going? It was hard to take pictures of these boys, they were all over the place! 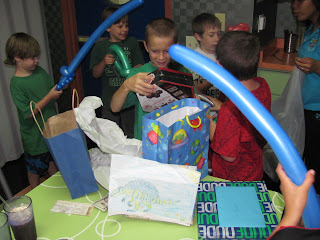 So this place is like a glorified Chuck-E-Cheese but with games that actually work and food thats actually decent. Each child a card (instead of coins) to play a bunch of games. They had a blast. 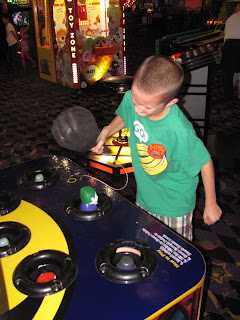 The girls just went around swiping their cards. We had to give them a little direction. So funny. 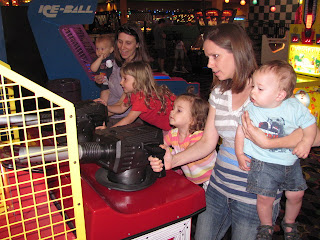 Skee ball balls were ALL OVER THE LANES. Watch out when playing next to Penny, her ball is bound to end up in any of the 4 lanes. 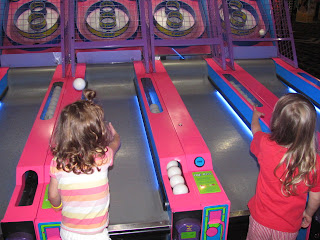 The carousel moved as slow as a turtle but it didn't stop Penny and Catherine from having fun on it! 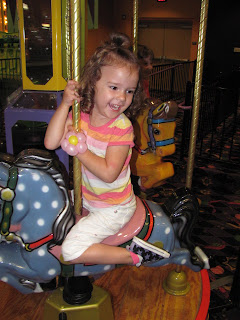 Bringing the backpack was a FABULOUS idea and Michael didn't mind being in it one bit. There were so many things to point at all night long! 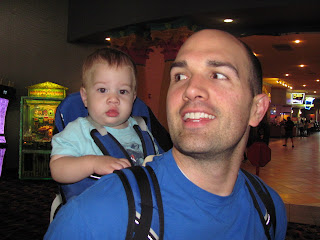 Naomi and Levi were serious about their game playing. We had as much fun as the kids. 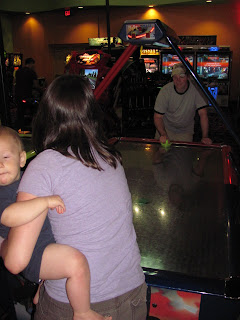 Becky (a friend from our place in Sacrament who just moved out our way) joined us with her 3 kiddos. I am so happy they are so close again! 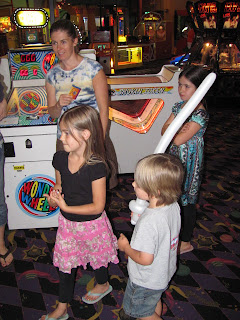 Adults ride free with their little kids so we force them to ride the rollercoaster so we can get on for free (kidding). Catherine didn't so much enjoy this ride when it was full of people, it made it really jerky. 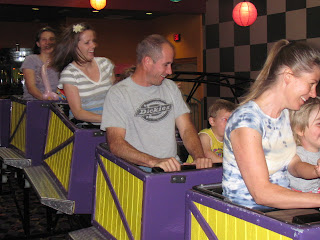 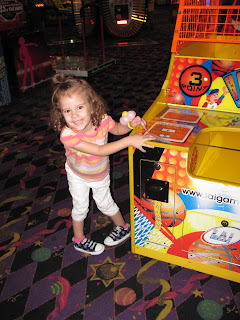 Dominic was seriously all over the place, so though it was his birthday party he was nowhere to be found at any given time. I can guarantee he was having a blast though. 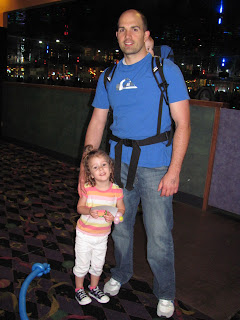 Barely caught a glimpse of him here. 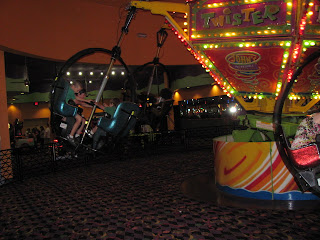 Happy Birthday Dominic! I'm so proud of who you are growing up to be. You are an amazing brother, son and friend to many. I cannot wait to have you home again at the end of the summer. This is going to be an amazing year being 9, I just know it.
Posted by Katie at 10:36 PM

Wow, what seriously rad parents! So awesome on the tickets deal :)