Penny one day was asking Sean and I where her tweezers went. I, for the life of me, could not figure out WHAT on earth she was talking about. I asked her to explain and she finally made some gestures with her hands that made sense to me.
Dominic called this toy his Gravver and it is one well made toy. 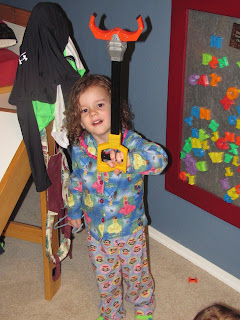 Penny LOVES the movie Tangled. She has told me that she wants straight long hair that is golden. I asked her who would have her adorable brown curls if she got the straight, long golden stuff and she said somebody else could have it instead.
So, while we were at the store we saw (gag) a clip on Rapunzel flower with a lock of hair. It also has some fiber optic strands in it so that it can "gleam and glow." I cannot tell you how cute it is to see her stand in front of the mirror and sing "Flower gleam and glow. Let your powers shine..." She's so cute but have to remind her that my princess is already in there but pretending to be Rapunzel is okay too. 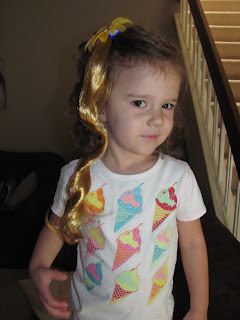 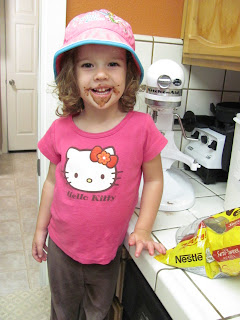 While his siblings take baths, Michael has to patiently watch because there are just too many bubbles and far too much water to put him in there too. So, we passed the time by putting on goggles instead. This kid is not afraid of anything, none of my other kids would have put up with this at 1. 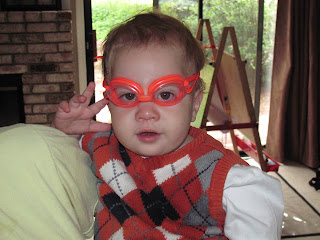 Can you see the monkey on the rings? If I ever don't know where Penny is, I'm bound to find her in the garage swinging on the gymnastics rings (they hang from the pullup bar and Sean uses them for exercises. But the kids LOVE them more than anything. 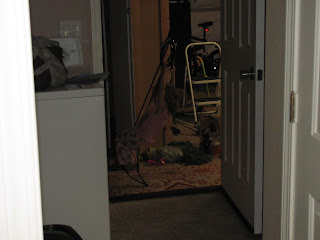 Just sitting on the stairs. 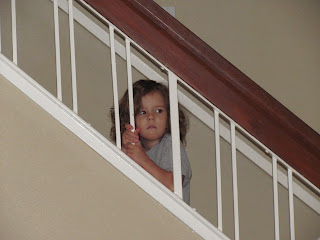 He found his bottle and just helped himself while watching Signing Time. I love how chill this kid is. Just tonight I changed his stinky diaper and when I was all done, he looked up at me and signed sleep, not whining, just matter of factly....... I looked up at the clock and noticed it was 8:30pm. I had no idea it was even close to bed time. I asked him if he was ready to sleep and he signed it again. So, I got him in his PJ's and nursed him and layed him in his crib for the night. He won't wake till 7:30 when I wake him up to take Dominic to school. He's just so mello!

*update: and I knew if I put it in writing it would the night he decides to wake up at 11:30 just as I'm going to sleep, fuss off and on for 30 minutes only to have me go in and nurse him and him be awake and ready to play. Yes, that was my last night. 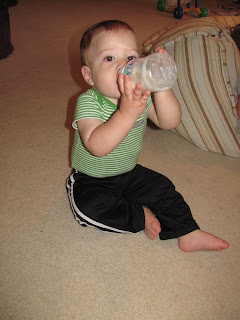 Penny has been drawing smiley faces, and only smiley faces since she started drawing at 1.5. Lately they are getting pretty creative. 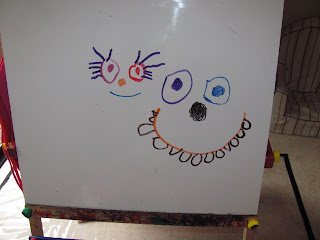 all of them are sooo cute. Denali loves Tangled too but she thinks she already has the golden hair! I hear her sing that song all the time too. hehe.

Brenna, too, likes to sing the song from Tangled and does NOT like me to sing along because *SHE* sings is so much prettier than me. HAHA! I love her!

Michael looks so handsome in that sweater, and Penny looks so pretty with the chocolate on her face. Oh and that sweet chunky monkey with his bottle, I just wanna eat those kids up!