Dominic got his Wolf badge tonight. He has been excited and waiting for this ALL MONTH as he finished it right after the last pack meeting. They didn't have on record that he'd gotten his bobcat so they were prepared to give him his bobcat......he didn't need it, but they made him go upside down to TURN A GOOD DEED anyways since he never did that the first time.

He thought that was pretty funny. 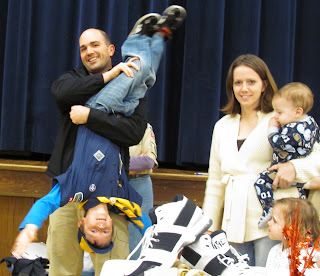 Our point and shoot camera doesn't do very well with pictures in a gymnasium so these are a little blurry. Here he is pinning the wolf pin on me. So proud of my guy. 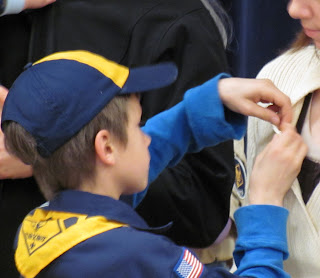 So thats it! He's officially earned his wolf in cub scouts. Funny story, this summer when he was in Fairbanks I was talking to him on the phone. He kept asking me about being a wolf etc. I told him that he had to finish his bobcat requirements and then he could start working on his wolf tracks. At one point in the conversation I said, "Dominic, you are a wolf but you have to do the wolf tracks to get your badge." I got off the phone and Penny immediately started crying, "I just want my brother to be a boy and not a wolf!"
Sweet, sweet Penny.
She misses him so much when he's gone and was REALLY worried that he was turning into a wolf while in Alaska. She was reassured when he came home and he was still her same awesome brother.
Love that girl. 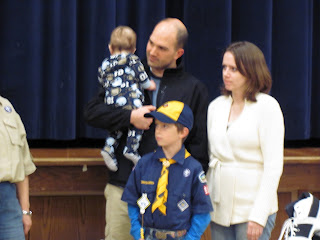 How fun to be in scouts. I can't wait for Brady to start, it's just the best for boys!

cub scouts is the funnest. good for dominator.

What Penny said is so funny!! I was the wolf leader in our ward last year, and now I am the bear leader. Those boys are so fun.