We went up to Tahoe on Saturday and enjoyed playing in the snow. Its really only an hour drive for us so its not really that far. About 15 minutes from our house we start to see patches of snow and at 45 minutes away we start to see walls of snow on the side of the road. This sledding area use to be an old ski lodge but the lodge isn't open anymore and they use it for sledding. Weird part for me? You have to pay $15 to go sledding. We got there early, at a little after 10am and people were just starting to show up. By 1pm the place was as packed as an amusement park and we went home. Being so packed kinda took the fun out of it for me, but we still had a great time and now we know what to be prepared for when we return (albeit probably a different place next time!) It was nice to touch the snow as Penny hasn't played in snow like this since she was 1. We really just didn't realize it was so close to us!
We were a little overdressed as it was almost 40 degrees out, but the wind was pretty strong and so we weren't sad to be wearing hats and snow pants. Penny was the first one all dressed and ready to play and she could not WAIT to throw a snowball. 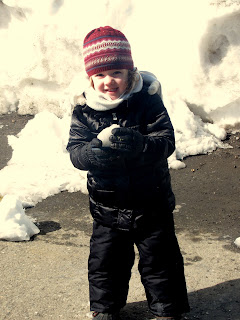 Dominic got too hot in the snowpants we had borrowed and took them off halfway through. 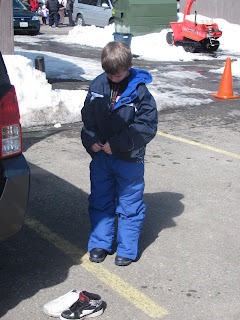 Sean took a turn holding Michael, who had fallen asleep. He found his beloved beanie/hat stuffed inside a pocket in his winter jacket. He's been looking for that hat (he bought it at Salt Lake Olympics) for about a year now. 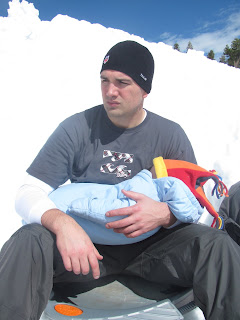 This kid was all about going fast. Our sleds were a little rough underneath so they didn't go as fast as he liked, but that didn't stop him from having fun! The combo of that and really wet snow made it hard to get down the hills fast. When Dominic and I went together, we didn't even make it to the bottom, but if he was all by himself he did. Guess those cupcakes I inhaled for my birthday were a bit too much? lol 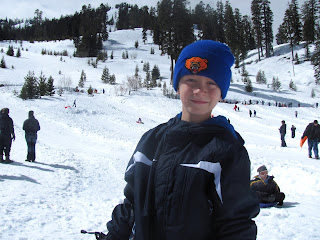 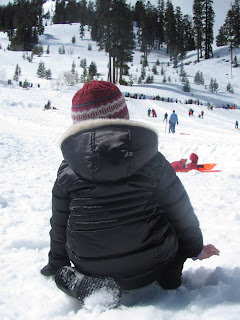 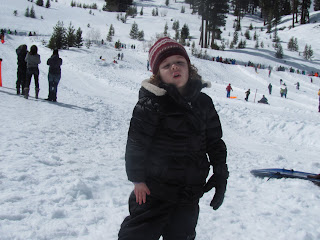 I helped Penny climb the mountain of snow that they'd built as a stopper at the bottom of the fast lanes. 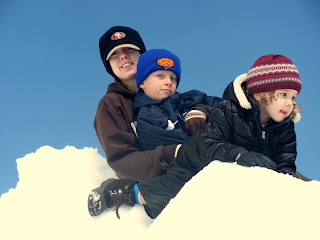 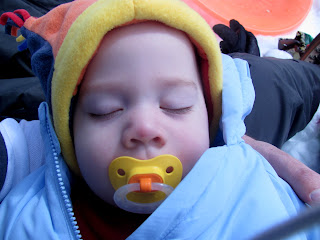 Her curls kept peeking out to say hello. 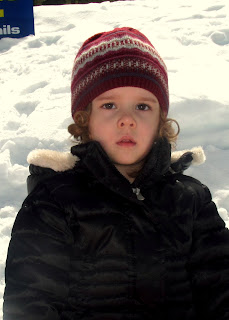 Some people had some REALLY FAST sleds. It was fun to watch which ones actually worked really well for going fast, spinning, multiple people, etc. We definitely have a good idea of the kinds of sleds we need to get just from watching everyone! Do you see the lines of people at the top landing there just waiting to go down?
People drove from really far to be sledding at this place. One guy I overheard had driven 5 hours with his kids to come sledding today. They had also brought a BBQ grill, camping chairs and enough food to stay for a week! Sean and I thought this would be a lot of fun to plan to do with a group of friends since we really aren't that far away. The smell coming from the various grills all around was tantalizing. This boy got the most exercise I think. He was pretty tuckered out on the way home and continued to stay asleep for another hour or so after we pulled into the driveway. 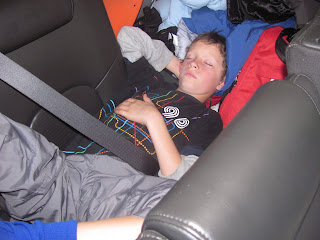 I do miss the snow in Alaska, I ain't gonna lie.....but I don't really miss the cold cold cold temperatures. One thing I really do love about Cameron Park is that we're not far from snow if we want to see it. We'll definitely go again soon!
Posted by Katie at 9:41 PM

When you bring our sleds back would you mind loaning me Catching Fire? I've been meaning to ask you and keep forgetting, then I finished Hunger Games and realized I need it...

I'm sure my kids riding the sleds down our dirt hills have something to do with them being rough. They worked fine for us though, so maybe you just had too big of a load!