Almost every night we have a green smoothie. Full of only fruits and veggies, its become a tradition to make the healthiest yet yummiest smoothy we can. Last night, we loaded it with spinach, avacado, carrot juice, pinneapple, banana, apple, frozen strawberries, frozen orange (froze them before they went bad) and frozen peaches with a little soy milk and water. They are delicious!

And the mustaches are to die for. 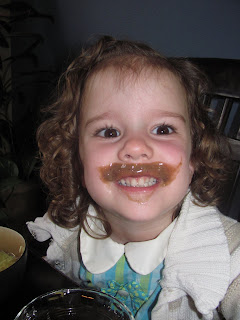 Dominic doesn't want to cut his hair right now. I told him he was allowed to keep it a modest length as long as he showered every other day and it looked nice.....otherwise, he goes to the chopper. 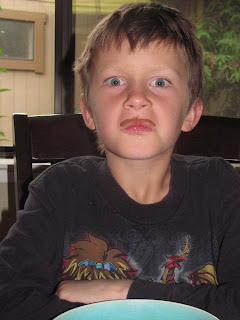 Michael had learned how to use the chalk. Yesterday, he was caught trying to muscle the huge 3D chalk and get it to write on the board. It was hilarious to watch because its bigger than his forearm and trying to move it left and right was more than his arm could handle. So, I got out the normal sized sidewalk chalk (thats been put away because he tried to eat it) and then he scribbled away! What a little Picasso! 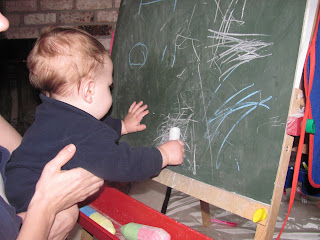 I remembered that I had a walker that a friend gave us when Penny was a baby. I went up to the attic and found it as well as quite a few other toys for Michael. It was like Christmas! Penny likes to try to help him walk around since its still a little fast for him. 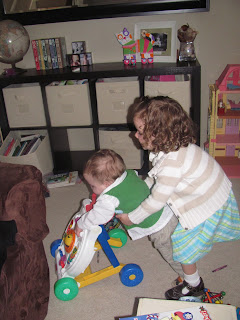 Oh face paints, how we love you. She likes to paint her own face these days.
I love the uni-brow. 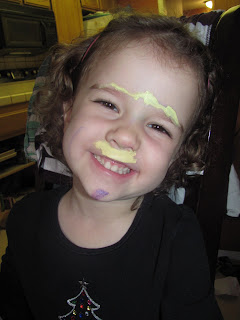 There is something peaceful and balanced about this picture that I just love. The sunlight and Penny, with her concentration face on. 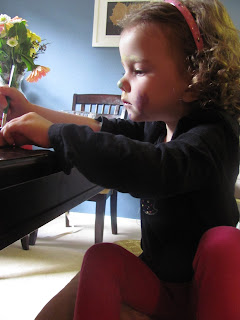 She asked if she could paint her feet and I said yes. Her reply was a super giddy, "Ooooooh man. This is going to be so fuuuuuuun."
I wish it was recorded. Maybe you just had to be there. 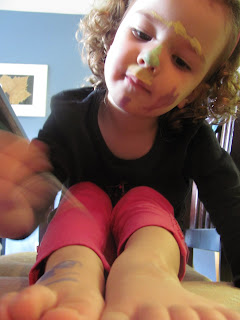 Dominic works for the business putting labels on product so that Sean can ship them off to Amazon. He's learning a lot about expectations, what breaks are for (you don't take a break and then spend the next 5 minutes that you are supposed to be working, in the bathroom), and what works to stay motivated (music, racing against time or mom). This business has been a great tool to teach him work ethics and for the most part, he loves it! Plus, he gets paid and is learning a great deal about tithing/saving and spending.....and makes more than the 60 minutes an hour we use to get paid when I was growing up. ;P 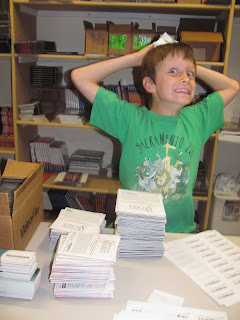 Dominic has some home school modules that we started up again to supplement what he does at school. He has a binder that we put all his work into and to keep it all in one place. Naturally, Penny needed her own binder too and I happened to have some workbooks from when Dominic was her age (I only copied them but never used them up). So, I made her a notebook too. She's been LOVING doing her homework. Its amazing how much she has progressed in the last month. 4 weeks ago she didn't quite understand why those dotted lines were there and also didn't quite have the fine motor skill yet to stay on those dotted lines. Now, she's drawing the lines like a champ!
I think next years home-schooling will make quite a smart little cookie out of Penny as well. 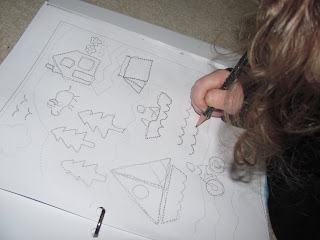 A couple months ago Penny decided she wanted to learn how to read so I located a Kindergarten Hooked On Phonics Reading set (I had to borrow the Kindergarten one as ours got loaned out and misplaced). So, a few weeks ago we finally started the series and she is LOVING IT and doing very well.
So far, she can read 5 stories by herself. She's doing so great! Vita Mix: The best investment every! You're going to homeschool Penny!!!???!! We signed up Eli for homeschool, we went with Visions, who did you go with? It's all so exciting!

those mustaches are awesome!