I know, I know....enough about my birthday already. After uploading more pictures today I noticed there were a few that I missed that I surely wanted in my recorded history.

I mentioned Dominic made me pancakes on my birthday before I was even out of bed. He also forgot to spray the pan. It didn't really look like a pancake when it got to me on the plate, but I ate it anyways.
It was unique and delicious. 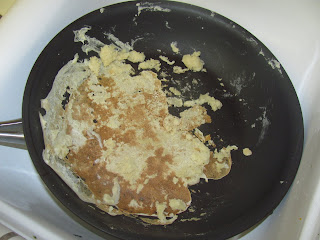 Sean and Penny made me the most fabulous cupcakes I've ever had in my life. It was just a cake mix from the box, but instead of the eggs he used ground flax and water (again, 1 TBSP ground flax with 3 TBSP water in place of each egg). They were seriously the best cupcakes I've EVER had in my life. I think I ate 5...yes, you read that right. And another 3 or 4 the next day before I finally admitted that I was addicted and delivered the rest that I had to various others around town. 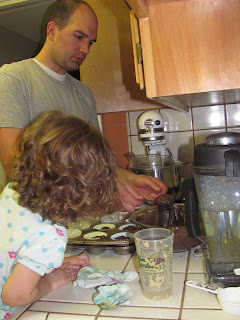 In my cupcake glory. Michael had a few bites, but mostly  he was happy to be eating the celery. 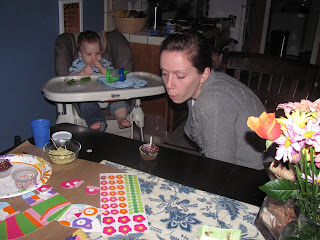 Kim, notice the craft Penny is working on? She loves it and has made 2 so far. They are right up her alley.
Posted by Katie at 9:04 PM

hahahaha... that pancake! What a sweet boy :)