Michael's favorite thing to play with is the stuff under the TV. He really likes how the tan basket feels as it has little whisps of straw-like tufts coming off of it and he likes to try to grab the little tufts. If anyone is playing playstation, he wants your controller.....not a different one that isn't being play with, he wants the one you have. 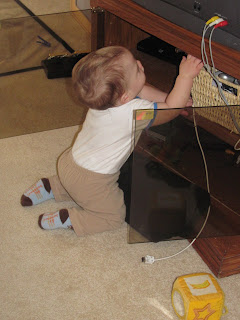 Hi, meet Snaggletooth Louie. I was sad to say goodbye to his gums but these little teeth coming in are so super cute. This picture was just last week and only one had broken the skin and come down a significant amount. Today the other 3 broke through and he should have a pearly white smile here pretty soon. 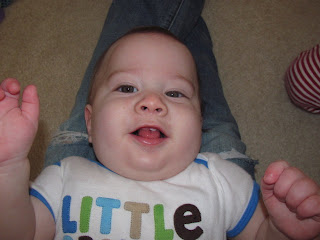 Penny has started to add eyelashes and other details to her smiley faces. 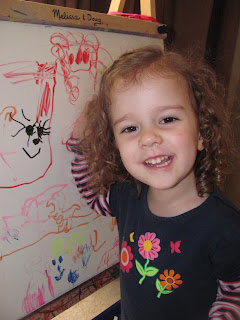 You have to put him upside down to see his teeth, hence his chub falling upwards on his face and neck. =) 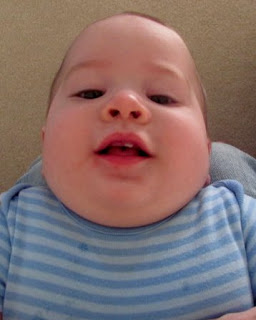 Sometimes Penny locks herself in the pantry and eats spaghetti noodles. Sean opened the door to find this: 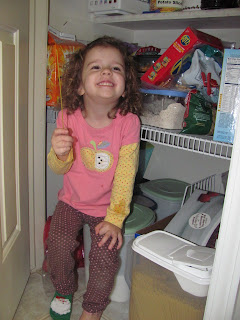 All 3 children ready for church. I love these kiddos. 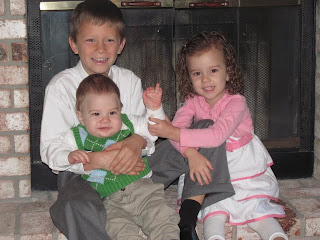 Sean, Dominic and I (another friend Sean was playing too but he had to leave before we finished) played electronic Monopoly on Sunday night. Sean kicked butt and knocked me out of the game quite early. He strung Dominic out for quite a while. Notice all his properties are mortgaged.
The nice thing about electronic monopoly, there is no paper money to fumble with. The downside to electronic monopoly : everything is done by a debit card so its hard to know at any given time how much money you actually have (you can put your card into the scanner and it will tell you, but there is just no visual and I'm a visual person).
This game is tons of fun. Can't you tell by Dominic's face? 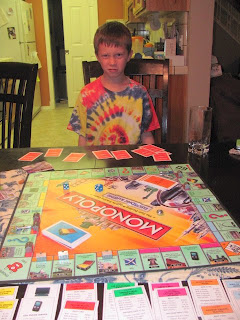 I took the picture of Penny's drawing because it was of me. At first she thought I didn't have any eyelashes and I said,"Yes I do, look". So she drew me some eyelashes.