The Cambridge's Great Grandpa has an orange tree in his backyard that is about 40 years old. Its an AMAZING orange tree AND I've never picked oranges so Naomi decided to fix that. We all went out there yesterday after we picked our kids up from school. On the way out Dominic said he was so excited and then added, "plus, I'm really good at picking things like that."
And, he is. He's always been good at picking blueberries, strawberries and raspberries back home.

We picked to our hearts content.
Funny thing is, there were still more oranges on the tree than we picked.
We hardly made a dent. 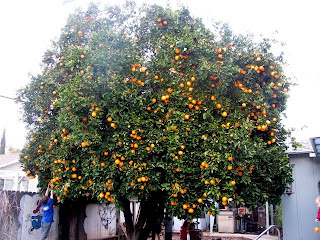 I got WAY UP in the tree. My childhood tree climbing days came back to me real easily. This picture is zoomed it but I'm up about as high as I could go and out on the limbs. This made Dominic really nervous and he said several times,
"Mom, I don't like this (meaning you being up in a tree that high) at all. I think you need to come down."  and
"I'm serious mom, please come down right now."
He's so very protective of me. 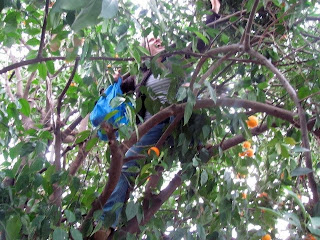 He climbed pretty high too. This was so fun for him. 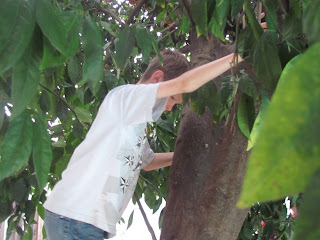 Penny gathered the oranges that the boys handed down and carried around the bags. She was loving all the work involved. 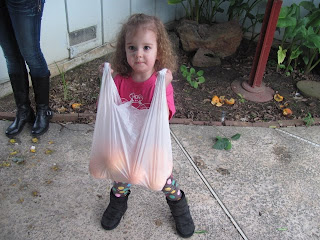 She tried to climb. 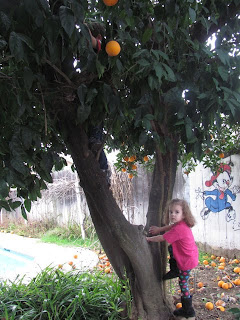 Dominic is a little nervous of heights. Which is fine, it makes for a cautious boy. At one point on the ladder, a bug fell on his arm and he screamed bloody murder. I seriously could not figure out what was wrong till I looked where his eyes were looking and saw the bug on his arm (he almost fell off the ladder).
It was kinda tricky trying to hit the bug off his arm and keep him ON the ladder at the same time.
Poor guy. 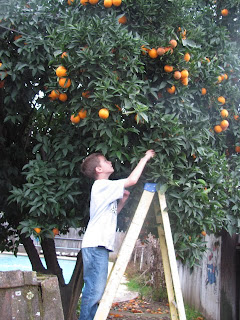 There were lots of oranges just dangling off the tree, but we tried not to pick those as they were the ones that their great-grandpa walks out and picks for breakfast. I would seriously love to do that. Next house requirements; an orange tree. 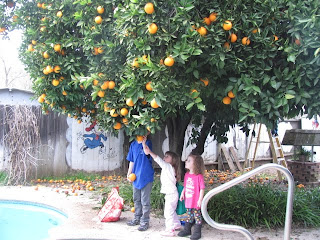 Michael and David were in our arms for a lot of the time, but as I started to clean up all the rotten oranges on the ground (I figured I could work a little for my oranges) they needed a place to play without the danger of falling into the pool. Meet, the cage. =) 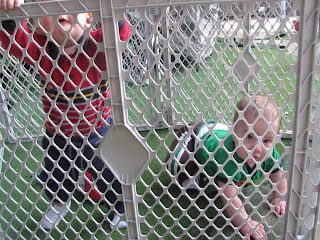 Penny and Catherine each picked 3 oranges while up high on the ladder. 3 because they're 3. 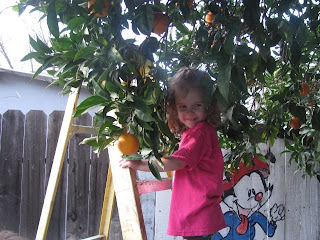 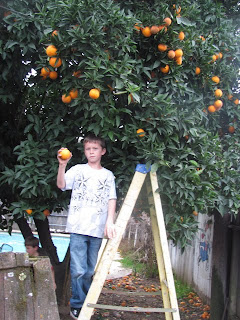 This was sooooo fun and oh my, there is NOTHING like a fresh orange from the tree. I'm not sure I'll ever be able to eat an orange from the store again. There really is NO OTHER ORANGE like it.
So at dinner, we started the orange frenzy with my favorite orange drink; an orange julius. I haven't had one in years.
Recipe:
4 oranges peeled and put into blender
2ish cups milk
2ish cups ice
2 tsp vanilla
1/4 ish cup sugar (I think I used a little less)
blend it up and drink it!
Posted by Katie at 9:20 AM

I love it! I don't have fresh oranges, but I think I'm inspired to make an orange julius tonight anyway. :)

Oh yeah, we've been hooked on these for a while. I use farmer's market oranges and blend with soy milk, Mexican vanilla, and honey. I also throw in a little banana for creaminess. Soooo refreshing this time of year. And I don't think I have ever seen so fruitful an orange tree- I am envious for sure.

I love the picture of Penny holding the bag of Oranges. You need to tell the story about Dominic and the bug on his arm too.

I loved it when Dominic would come to my house in CA and beg to pick lemons off the tree... so fun!

I miss our orange tree growing up. We totally took advantage of the fact that it was there.

We are so glad we all got to go. Thanks for doing most of the dirty work:) I'll see if I can get Levi to go with me in a week or two to get the ones you could only reach by climbing on the roof!