Penny's favorite book from the library this go-around is a book titled Francis the Scaredy Cat . At the scary part (she already knows the ending so she's not scared anymore) she's helping Daddy not to be scared by holding him. So funny. 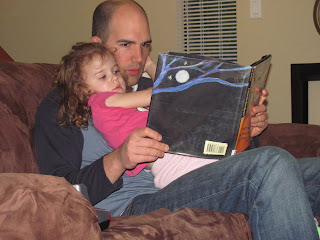 I love this little guy. He's almost 9 months old now and is finally crawling around (not just army crawling). He can also pull himself up to standing to the couch and pretty much anythign else. His favorite gerber foods are peas or green beans (who is this kid right?) He likes to eat whenever we eat. He needs a diaper specific for night time or it leaks by morning (even when I sized up a diaper). He fits 12-18 month clothes and a few 2T. He's 23 pounds and has 6 teeth. 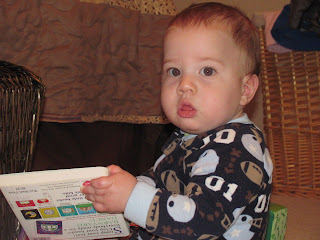 He loves books and things that he can use to bang on other things. He loves it when Dominic comes near and continues to try to play with Penny's hair. He notices the smallest of things on the floor and gets them directly to his mouth. He squeals in delight when I play the "I'm gonna get you" game as he tries to scamper away as fast as he can (which in his excitement really is much like the fainting goats). 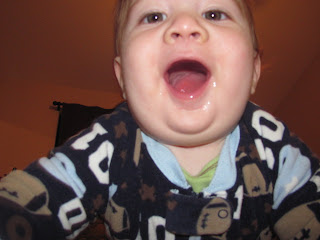 And here it is in its full glory (last week). ALL FOUR...count them, 4...... TOP TEETH. I thought I was really going to miss that gummy grin, but these teeth are so stinking cute that how could I be sad about it? 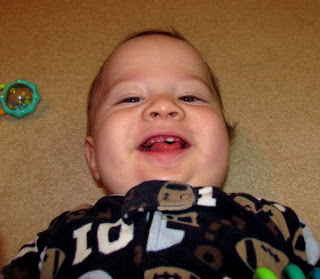 So far so good with the nursing, he hasn't started biting yet though I had a 1 week stretch where I thought I was a gonner. He still drinks about 1 bottle of formula a day (about 5-6 days a week usually). He doesn't seem to care which one he gets as long as he's fed. If he's not feeling good though he just wants mommy's milk.
Posted by Katie at 11:43 PM