I recyled this #10 can (hello food storage put to use) by filling it with rice and beans for Penny to play with over a year ago. Now and then Penny pulls it out and pours, mixes and plays with it on her mat (we join in the fun too. This was one of Dominic's favorite games as a toddler). The can resides behind the couch so we don't think to pull it out too often, but we go through spurts. Its been months since we last played with these and on Thursday, Penny saw the silver can and wanted to play so out it came. However, since we've played last, I've gotten a funnel. Wow... was that the missing element or what?!! She SERIOUSLY played with rice and beans ON HER MAT for over an hour. Love it. 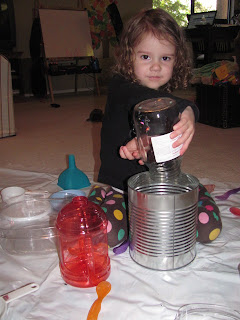 It was all seriousness too. (Annie, do you like my canvas photo on the wall? We do) 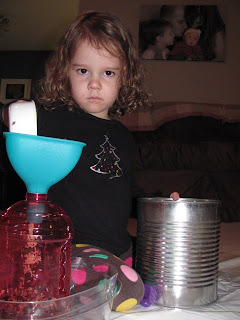 So we played for a bit, then I decided to get out the camera because she was really into it. I started taking this video and then the phone rang and I walked away and forgot that it was still recording. The video was originally 12 minutes long.....don't worry though, I cut it. =)
I love that after I leave she still continues to talk about how a funnel works.
Posted by Katie at 10:18 PM