To say he is mobile is an understatement. This kid GOES and he's only getting faster, braver and stronger. He doesn't stand yet but will pull himself onto his knees to get a taller view into things he's never been able to reach before.

He's been cutting his 4 top teeth yesterday and today. One finally broke through and we can see the other 3 just under the skin. No more toofless grins for this baby. Meanwhile, he's been in all sorts of discomfort over these new teeth coming in. Poor little guy. 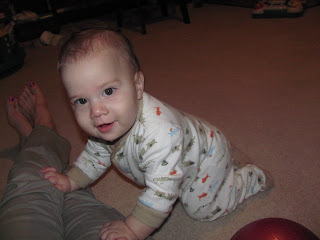 Just cruisin. He ALMOST crawls. He takes about 3-4 steps with his hands and then goes down and army crawls....its just what he's used to and gets him around plenty fast. 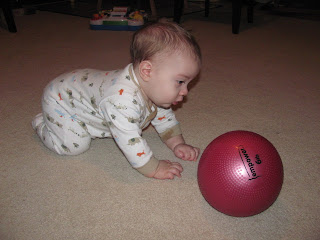 He can fit almost his whole body into this basket trying to get the toys at the far back. 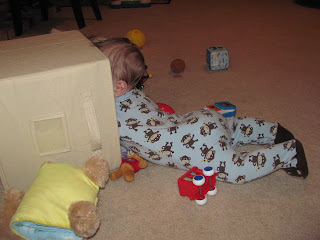 This was his first real attempt at trying to get up on his knees and IT WORKED! He was in all kinds of excitement over what he found only to find that he didn't know how to get down. He tried to reach over to that hope chest to the right of him but needed another 2 inches to actually get to it. He tried 3 or 4 times though before I finally decided to just get him before he toppled over. 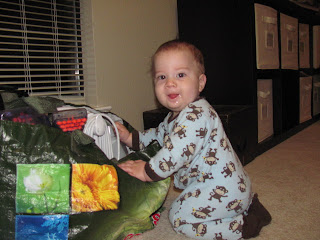 I love this picture. I was calling his name and he was starting to look over, but something caught his eye just as he started to turn his head. I think it was those orange bristles. So funny. 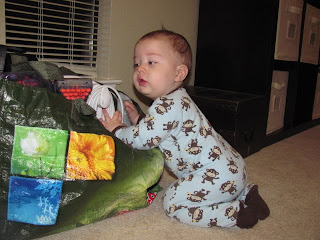 The only thing keeping him sane right now is his basket of toys. Mid playing though, he'd just burst out crying because of those darn teeth coming in. He's so sweet and just wants to cuddle when they are hurting. 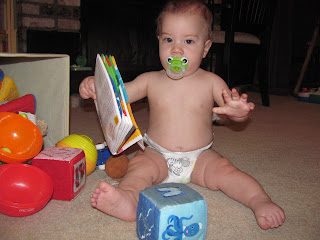 Getting some snuggle time. He just sat like this for who knows how long. 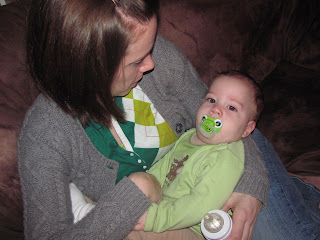 Daddy took a turn snuggling him too. Its no fun to have a child not feel good, but I sure do like the snuggle time. 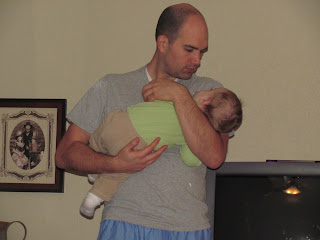 So, I decided to try to get some shots of his upper gums before the teeth are visible and so I put him in his high chair today to take those photos. He can't handle NOT grabbing for the camera. 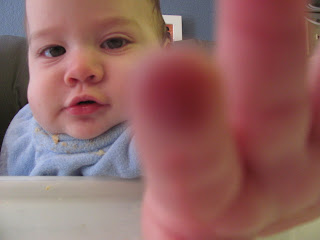 There they are, gums in their glory. Say goodbye babyface..... =( 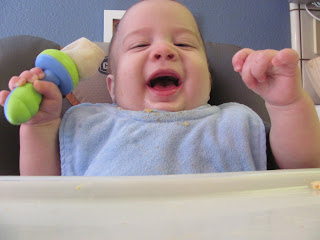 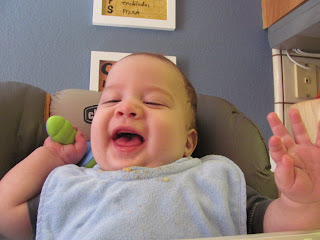 We read lots of books today and then he decided that the book also made a good pad to hit on with the thermometer. (photo by Penny) 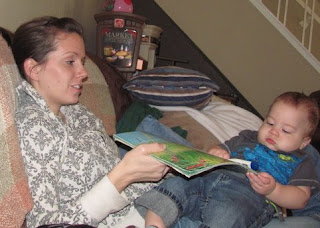 There are two things I love about this picture. One, the slobber on the wooden toy tells me he was trying to bite at the velcro in the middle of that slice of bread. Two, he was trying to take off his socks but just couldn't quite get the leverage he needed to finish the task.....on both feet. He was very busy in this one spot for quite some time. He musta really been working on those socks. Oh, I love him. 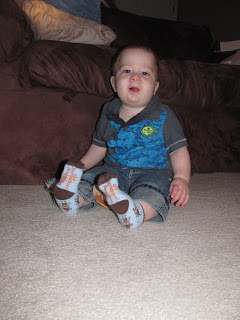 So, besides cutting teeth, he's learned a lot of things since turning 8 months old.
He can clap, crawl (almost), get up on his knees, climb (oh joy!), sleeps through the night in his crib again, eats pieces of banana bread and cheese in small chunks, turns and looks at me in his carseat in the car as well as tries to (and I think can) look at the TV in the car when its on, plays a funny slapping game with Dominic where he waves his hands at Dominic's face while laughing, sign for milk (he's been doing this since about 6 months old but only if I grab his arm otherwise he can't focus all that energy to his hand. Isn't that funny?), turn pages in a book, uses pincer grasp, licks himself in a mirror.

See him just lose it and start crying at the end of the video. Poor baby just not feeling good.
Posted by Katie at 11:29 PM

I love the pic of him trying to grab the camera. he is such a cutie!

Oh he is a TANK!! I love it when they are mobile- he's a cutie! I love that picture of him grabbing the camera! Fat Fingers!! :o)

Oh man I love that kid, I hope this doesn't mean he'll be losing all that awesome chub now that he's so mobile, feed him double just to insure he stays soft :)

I dunno I'm pretty mobile and I'm not losing any.