Dominic had a book report due for school. He was supposed to read a mystery book and so it became a good time to introduce The Hardy Boys. He loved it. This one was, The Secret of The Caves. In it, the caves were called Honeycomb Caves. One of the main clues to the mystery was a test that was written by a professor who disappeared and left clues in the answer key. Also a boat that caught on fire. Dominic had a little bit of a hard time knowing how to narrow down the clues and make it into something presentable and knowing which clues were significant enough to use. I thought he did a great job.
I had to be the one to glue the honeycomb together as we were using hot glue. Apparently, one of the kids in his class couldn't resist and ate one. hahaha. Gross. 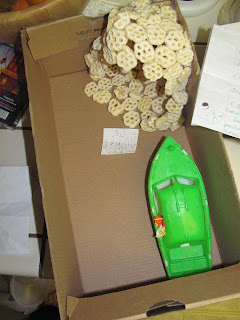 We have cut out Penny's nap during the day. It was becoming that she would stay up at bed time anywhere from 1-2 hours talking and reading in her book....which is fine, but then she would also get out of bed for silly things like water, potty, hunger etc. Really, she was just bored and not tired. So we did away with nap time. Unfortunately that means that sometimes if she stops moving around the 4pm time (she had decided to color while on the floor, which wasn't exciting enough I guess), she can't help but fall asleep. Yes, she was up till almost midnight last night because of this nap. Oh well, can't win em all. 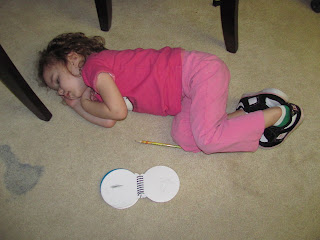 Penny lately LOVES to hold Michael. Which, for the most part is usually a happy time for Michael. She's become quite confident in her mothering abilities. I have to really keep my eye on her. For the most part Michael doesn't even seem to mind, but every now and then she'll roll him over and he doesn't like want to...or she'll smack him on the head with a toy because she couldn't resist seeing what would happen. She's not perfect, but she's trying.
From this angle, it almost looks like they are the same size. 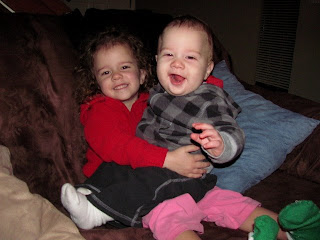 Micah loved the pic of michael on penny. He looks like he is her size! too cute.

Ah yes, the transition out of naps. I usually hit it around 2 years old with my kids, they just stop taking them, or when they do nap they stay up until 10:00 (totally not worth it.) It's so hard because you know they could benefit from the rest. I find little cat naps on the couch or in the car suffice just fine, and when 7:30 bed time rolls around it's all worth it!