Tonight was the Blue and Gold Banquet and the boys were asked to bring a cake for the dessert that they had helped make and decorate. Dominic decided he wanted to do a rainbow cake but a happy face (I gave him some ideas and he chose to do those). The theme was positive attitude, happy, or cheerful. It was a really fun cake to make especially at an even like that where you can't tell that the inside is going to be a rainbow of colors (and food dye! eeeek! ha!)

To bake this we used 2 white boxed cakes and divided each box into thirds using 1 1/3 cup mix in each 9 inch round pan.

We cooked two pans at a time, each with a different color for the different layers. (pre mix the food coloring into the batter before adding into the pans).
After they were cooled (we cooled them stacked on top of eachother with wax paper between each layer) I cut off the rounded tops and then began layering the flat layer together on the cake stand with an adjacent layers color of frosting until it looked like this : 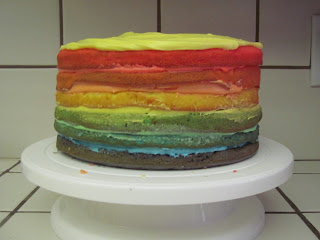 Backing up a little. I got to teach Dominic how to separate the egg yolk from the egg whites. The first egg he held straight up in his hand as the yolk was dripping down and the egg whites basically ran down his whole hand getting to the bowl....good thing we washed! But, redirection made for a perfect separation with the second egg. He thought that was pretty neat and did a pretty good job until the 5th egg, he punctured it. But, since the batter wasn't going to end up white it really didn't matter anyways. He had fun learning a new skill!
Since Dominic was wanting to do a yellow smiley face cake, I pre-frosted the whole cake yellow and then he put the decorative flower on the bottom edge. He did an amazing job with this part. I had one finger on the cake stand turning it for him and sometimes steadying the tip, but other than that, he did the rest. His hands were quite steady! 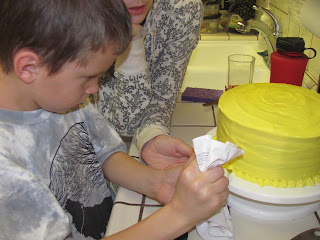 He then started into the smiley face. I really had to just walk out of the room for this part so that it could be his creation (not without pictures though!). I tend to hover too much if I'm watching. 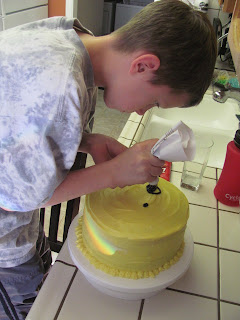 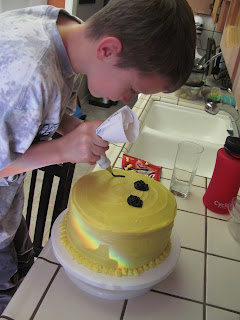 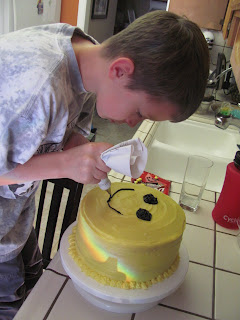 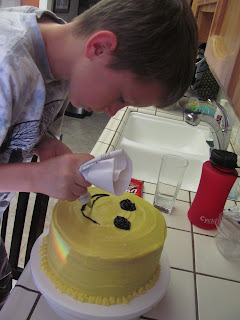 I love these next two. His hand was so steady! 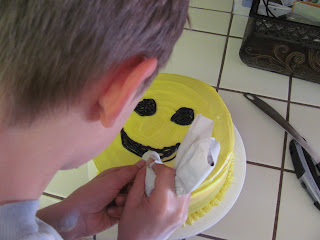 See how great his flowers look? 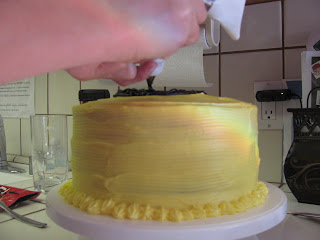 And here it was all done and at the banquet right next to the pizza cookie (looked so real!) and wolf cupcakes 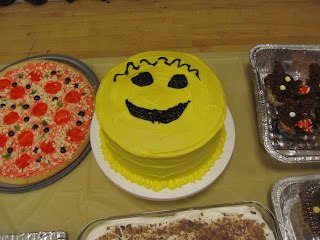 I forgot to take a picture of my slice so here is a picture of what was left of the cake! It looks so neat when its cut. 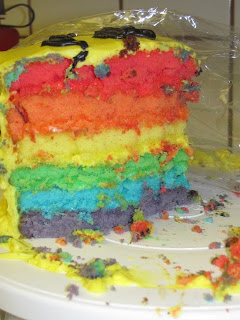 Good job Dominic. That was yummy!

I think you are now in the running for mother of the century!! Way to let him shine!

I may copy you, too, is that alright? Great job on the face Dominic!

Tha looks amazing. Preston just started scouts in Nov and I am deathly afraid of it. It stresses me out and we haven't even worked on anything yet. :)

Impressive, way to go Dominic! And way to go Katie, you have a lot of patience to make this as the treat instead of cookies or something super quick. Jacob loved seeing all the colors, he just kept saying/signing rainbow and then naming all the colors.

Michael is too cute and getting so big! We call Carter Squishy for the same reasons. :) When will we get to meet him?

OH my gosh that is so awesome! Good job both of you! Dominic has so many talents and a very willing mommy.

What a neat idea! I may have to try something similar for one of the kids' birthdays, coming up soon. :)

Katie! Thanks for your tip about the almond pulp! I'll have to try baking it into something.

I love the cake! I've made muli-colored cakes in the past, but never so many colors and layers. I love the rainbow look. What a cute idea. I enjoy decorating cakes and you've inspired me to start teaching our 6 1/2 year old, Elisabeth! Dominic did such a good job! (I think I'd definitely be a hoverer too :))You have a beautiful family!