Dominic was baptized last night. The evening started at 5:30 pm and was amazing.
We showed up around 4:30 to set up chairs and get the DVD player out and fill up the baptismal font. When setting up the chairs, I took all the hymn books off and stuck them in a cubby in the wall that they stand in. To my surprise a few minutes later, I found a bunch of hymnals out on the chairs again. I was setting up the refreshments when Penny came and asked me if we were going to be singing songs. I told her yes, we would.....and off she went. Apparently to put out the hymn books. 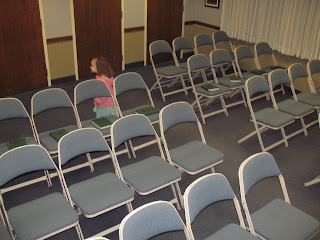 Sean and Dominic all ready for the big night.
Sean baptized and confirmed Dominic. I'm so proud of both of these two. 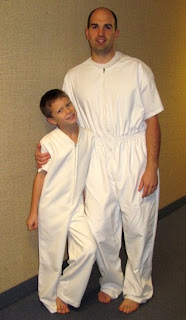 Dominic's Dad in Alaska was able to make it down for the occasion (which is why we waited until now to baptize him. He's been begging to be baptized since he turned 8 in June!) We have one patient kiddo on our hand. We were happy to have Ricky there and Dominic really wanted him to give the opening prayer, which he did. 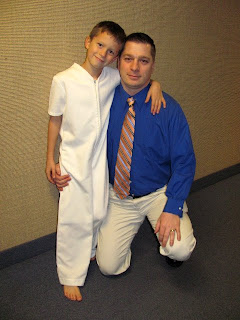 Dominic will write in his journal his thoughts on his baptism, but this is my EVENTS journal for my kiddos so I wanted to write what I remember here.
Counting all the children and adults present, there were close to 100 people in attendance. Every seat was full and we had to bring in more. There still weren't enough seats in the room, people were out in the hallway. Probably close to 1/3 of the people there were non-members. He made sure to invite many of his friends (and their families came along with them) as well as many family members (Sean's cousins and Sean's mom came) as well as several of our neighbors. It was so neat to see all those people there in support of Dominic and our family. We have amazing friends here. I absolutely love Cameron Park.
We watched several of the videos from mormon.org that we got on DVD for the kids for Christmas while Dominic and Sean were getting re-dressed after getting wet. It was the perfect setting to show those videos. Dominic's favorite one is this one and so we showed it first. But we also showed this one and then this one . We wanted to also show this one but ran out of time. These videos are amazing and I LOVE them. The spirit was there, I could feel it.
Penny wanted to test how warm the water was as it was filling up and so she stepped down into it, tights, shoes and all before I could stop her. Had I not been there, she surely would have tried to go for a swim.
Dominic discovered molasses cookies (some of the cookies we had for refreshments), which I love....and now he does too.
Jeff and Judy Keay were there, which was a piece of home for me. Almost made me cry when they walked into the room (they lived in Healy for many years where my Grandparents and Uncle attended church, he was Branch President). Judy even played the piano because the pianist forgot and didn't show up (Jen, we still love you. Don't worry about it!)
George Domm and his new wife were there which was a piece of home for Sean. Sean grew up around the corner from the Domm's and they were a great LDS influence on him. Penny and Annette's (George's deceased wife) were good friends.
Penny Grandma was there. She drove 10 hours to be there and took a few days off work. I can't explain how grateful we are for her sacrifice to come. She raised an amazing son and her grandkids adore her. Dominic was so pleased that she could make it out.
Ricky was there. This meant A LOT to Dominic that he came AND said the opening prayer. He will remember it always, that it was important enough to wait so that his Dad could be there too. In Dominic's blessing I remember Sean saying, "Dominic, your mom's and dad's are so proud of you and love you." I loved hearing that, I hate that it has to be like that (as it pertains to Dominic, that he has to have 2 homes and all that comes with that).....but as long as its going to be like that, I love that he has 2 mom's and 2 dad's that absolutely love him completely. He, since it is how it is......is very blessed.
One of his best friends Indiana was confirmed also. He was baptized over the Christmas break when he got home but not confirmed (he's 9.5 so considered a convert baptism. They don't do confirmations and baptisms on the same night when you're a convert). That was pretty neat, for them both to share their day a little bit.
Dominic was showered with cards and small gifts (and money! I'm thinking about borrowing money from Dominic, sheesh!) I was shocked at all of our thoughtful friends and family out there.
He has his own set of scriptures now. Sean and I got him a green set of snap closure scriptures with his name inscribed on the cover in GOLD CURSIVE(two of Dominic's favorite things). So exciting.
After the night was dying down, Dominic was writing in his journal. I asked him to write down how he felt and his response was, "I didn't feel different." Kind of like, did I miss something? OOps, sorry Dominic. I remember thinking I was going to feel a zap or something too when I received the Holy Ghost. So we had a talk about how we're pretty used to feeling good, having our home be such that the spirit is present most always (hey, we try but we're not perfect!). Its not going to feel much different than how we normally feel since we're used to it. Try thinking about a time when you felt bad about something you did wrong and the spirit couldn't be with you.....compare that to how you felt when you were confirmed and baptized. Now, tell me how you felt, "I felt really good." I should have explained that to him before hand, but it slipped my mind.
It was a GOOD, GOOD night, a great baptism and I am so proud of Dominic for making the choice to get baptized.
Posted by Katie at 10:19 PM

Congratulations Dominic, what an exciting and important day! We wish we lived closer so we could have been there too, we love you!

dominic is awesome. what a great day. :)

it sounds like a perfect day! how wonderful of penny to drive all that way. she is a wonderful grandmother. and hooray for ricky for being there and participating. congratulations, dominic!

Awesome! Wish I could have been there, congratulations Dominic!

Congrats Dominic! Wish we could have been there too! Bummer about the timing of our moving. They missed each other's baptism. But it all looked great!