Its hard to play any kind of game when Michael is awake. Dominic and I got one game of Connect Four before the Michael army moved in and destroyed the game and wanted in. 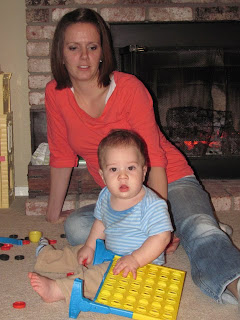 Penny serenaded us with the ABC's on Sunday. It was so pretty. ;P 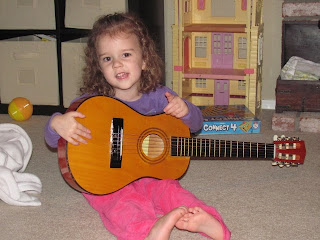 This is Michael's engrossed Signing Time pose. He loves watching it. 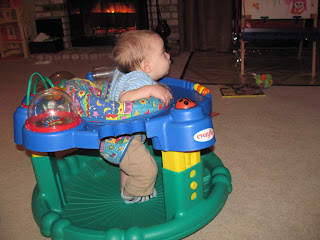 These things are absolutely gross. You put a piece of food inside the mesh bag and lock it in place. The your child is able to eat the food without the hazard of choking. Apples and oranges are Michael's preference and they don't make too much of a mess. I could not imagine doing banana's or avocado though. 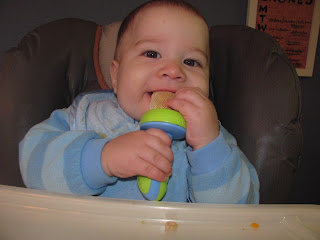 Penny wanted to practice cutting her pancake. So proper. 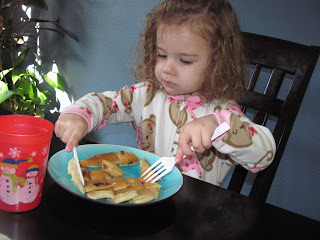 Michael was getting a bit sleepy in his high chair. I just love that face. 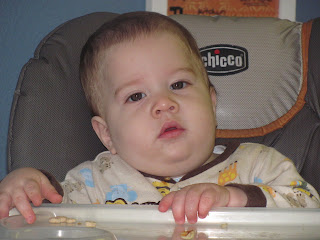 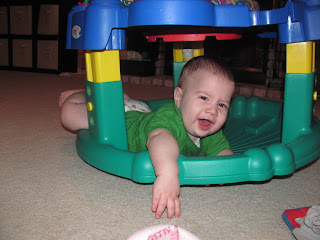 Penny was doing a spin and crashed into Michael's exersaucer banging her lip really hard. It was bleeding and got swollen immediately. Since she hit it at the exact spot that she likes to play with to soother her....she was in all kinds of worry about it. At one point she said, "I don't like this round on my lip."
I told her that if she put the ice on it, it would get small again by morning. Once all the ice melted I had to convince her that she had probably iced it enough and she should go to bed. She did not like that and asked questions like, "It will still get small again if I don't put more ice on it?" and "My fat lip won't stay right?"
So sweet. 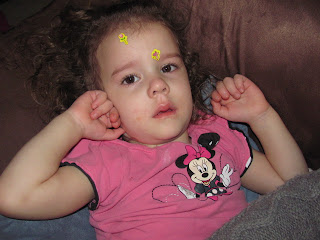 Here's a video of the silly brothers in our house. Michael just adores Dominic and gets so excited whenever we pick him up from school. He likes to silly slap him.

I KNEW it, Penny and Parker are soulmates! haha :)
Such a cute video of your boys.

We're game with that. Whats wrong with pre-arranged marriages? ;P

I love his face when he's crawling under the exer-saucer. It's an "I'm kinda pissed off right now" face, but he's still kinda smiling because someone is paying attention to him. So sweet.