I learned a lesson over Thanksgiving. I went to my sister Julia's house over the break and had a FABULOUS time. I love catching up and staying up late chatting, eating and just being with family. It seriously makes me happy. However, Penny and Denali did not quite clique. They are a couple years apart in age, but they really SHOULD get along perfectly, they have the same interests. Penny was in Denali's personal space a lot and also just wouldn't talk to Denali if she asked her a question (3 year old behavior). We were all busy cooking/racing/chatting that we just kinda ignored it, or danced around it mostly.
So on my way home it dawned on me that at no time did we stop what we were doing and PLAY with them. Read books, play toys or do a craft. Julia called me the next day and said the same thing, "Katie, we just didn't engage them."
That was the EXACT problem. So now, I can't wait to visit for Christmas and we can try again.

So, today Catherine came over so her mom and I could do some sewing. They play so well together, usually. Now and then they get in a funk where they just bicker and knit-pick and yahah-nuhuh-yahah-nuhu themselves to death. Today they started out really good and then the funk hit. They were bickering, tattling, annoyed at eachother.

Usually, thats when we break up the party and its about time for the play date to be over.
Until I remembered: they just need to be engaged in something!

My mom sent a Christmas wreath nativity craft from the Current Catalog (yay for random free shipping day! It made the crafts really cheap I guess!) and so I got a glue bottle out for each of the girls and gave them bare-bones directions and LET THEM GO TO TOWN!

I was happily surprised at how well they just put the people together. It was an instant success and there was NO bickering.
None, nilch, nada.
It was miraculous. 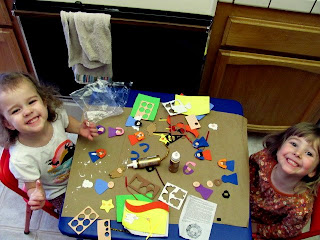 They glued and glued and glued so much that when we got all their things on the wreath we had to lay it very flat or the people would go sliding in the direction of the tilt. Good thing the glue dries clear or you wouldn't see the craft! 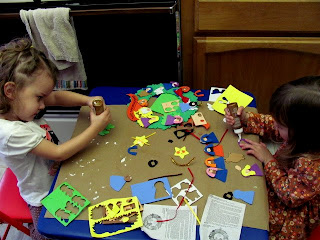 Since she did this all on her own, this wreath has so much character (I put them all on the wreath but she did all the parts to it). At first, it was a craft I saw as one that we'd put up this year and then throw away (sorry mom, I didn't know how cool it would be). However, I could never throw away the bearded angel and the cow with a headress. This one is staying in the Christmas decorations forever. 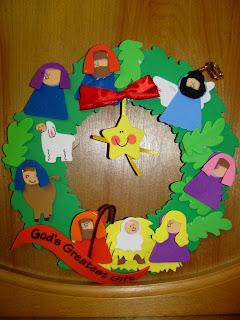 So, I learned a very good lesson that works
and kinda felt like, duh......of course!
Stop what I'm doing and engage my kids when they start to bicker.
Give them something hands on to do that is fun and gets them busy.
Its so much easier than telling them to stop over and over and over only to end with me being frustrated and my kids STILL bickering.
Posted by Katie at 12:11 AM

I'm gonna have to remember that! And the wreath is SUPER cute!

I needed this reminder today. Thanks Katie!

I laughed outloud at the cow with a headdress! It's hard for me to let my kids create on their own when I am sitting with them but I love what I find when I really let them do their own thing! what a treasure.
Can't wait to see you all at Christmas.

Did you post this just for me after I posted on fb about my kids fighting? Haha. Just kidding. But seriously, I needed to hear this. I was actually thinking earlier today how I need to just PLAY more with them. Thanks for sharing!

Oh and I LOVE the wreath and really laughed at the "bearded angel"!