Dominic had his last football games on Saturday. It was a CRAZY day to say the least. We had Breakfast with Santa in the morning (8am), Girls Christmas Brunch with family at 11 and Sean and Dominic's football game at 1 and 2pm (which Sean found out were actually at 12 and 1pm). I made it in time to see the 2pm game except there was no 2pm game. I caught the last 30 seconds of the 1pm game and got a few good pictures of Dominic covered in mud.

It was the nastiest mud ever. It smelled like manure. Nice. 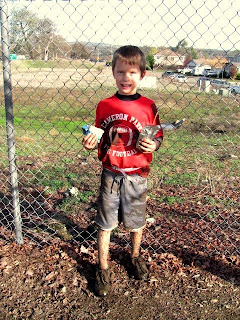 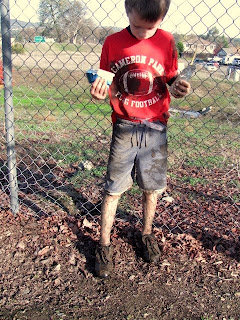 we made him hose off from the dog spout. All the boys were lined up ready for their "showers" before they could get in their cars. 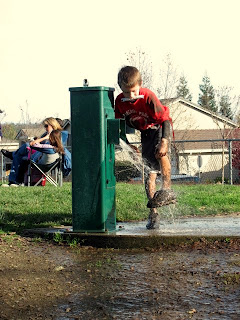 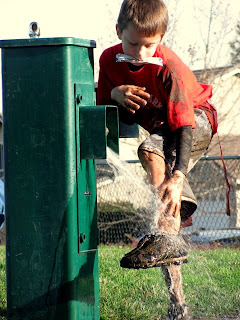 They had a good season. They lost every game, but Dominic improved A LOT including making a few runs for touchdowns. Sean noticed his hands getting stronger and better at catching from the first game to the last game. their team didn't have a lot of quickness and thats what was REALLY needed to win, ya gotta be quick! Sean had a good time coaching though it was still hard for him to lose. He's got the first year coaching under his belt now though and knows where he could improve for next season (if he coaches again). Dominic REALLY liked having his Dad as a coach.
Posted by Katie at 8:08 PM