Michael has been eating in, and LOVING, the high chair. I had been putting him in his exercauser to eat his stale french bread (yummy right?) and it made a mess 2 too many times, so I trudged on up to the attic and got out the high chair (after its 7 month hiatus gathering dust. Its weird to think that we only stopped using it with Penny 7 months ago.). He just turned 6 months on the 19th and he was so ready for this next step. He loves to eat his baby cereal, animal crackers, stale bread and the attempted (but rarely eaten) cheerios. His sausage fingers can't quite get the cheerios yet.

This little guy brings so much light into our lives. Just the other day Sean said,
" I can't imagine just having 2 kids anymore. He's so much fun and 3 is so great." 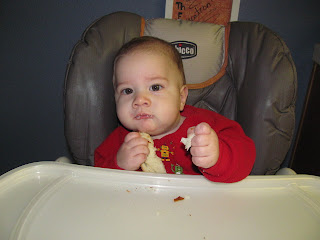 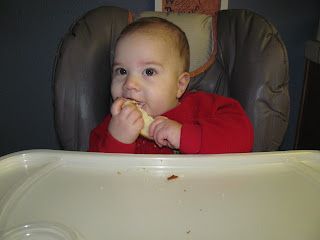 Dominic likes to feed him now and then but doesn't really last very long (perhaps though because I was hovering and being over critical of how he was doing it. I do that sometimes, and am trying to be better). He is quite good at taking care of Michael when I need a little extra help. He has yet to change a diaper though........aaaaaaaaand refuses. =) 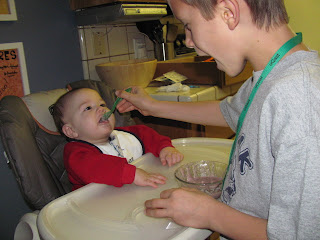 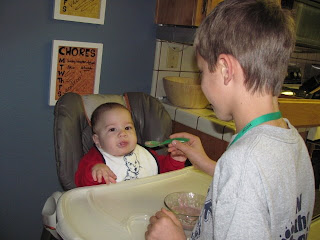 He has Sean's lips. 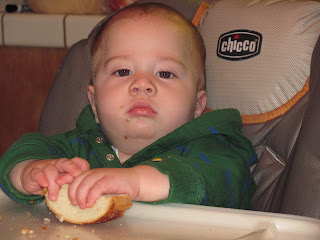 The holidays are upon us and I'm losing my mind with all the crazy projects I have going on. Sorry I haven't blogged as much. I have a few batches of pictures to catch up on though so stay tuned. Did you miss me? ;P
Posted by Katie at 9:59 PM