Some friends dropped of their kitties while they went out of town for a few days. Penny is in HEAVEN. She and Stella would not step away for the first couple hours they were here on Sunday morning. 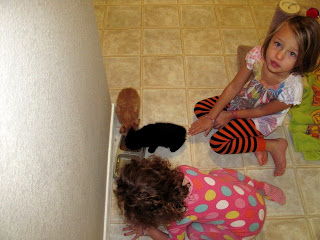 jfmckdj3kmjke4jvk vmjrmmfmfffrt,klltr.gt.y.lyl/ ghyyyyyylllllllllllln; .mulk.uuuui;;iii777778l;il;8il
(Penny wanted to type)
This says, "I can now hold the kitties because I love it." 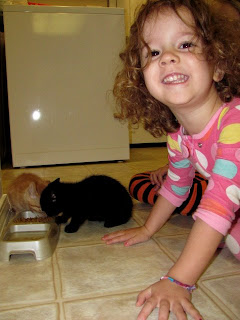 It is now almost 1am and Penny is awake playing with the kitties. She came downstairs at almost midnight and said she wasn't sleepy. She had a late nap so I'm letting her play with the kitties since its their last night here anyways. We hit the road to go to so-cal tomorrow afternoon so she'll be able to catch up on her sleep in the car. 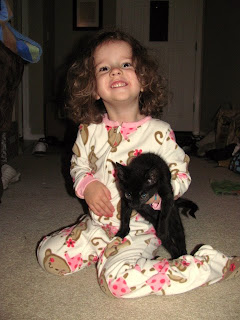 How she plays with them is hilarious. She has been coaxing them into paper grocery bags and then picking them up. Oh, she would love a pair of kitties.....but, she will just have to go visit Catherine for that.
We are now off to bed, wish us luck.
Posted by Katie at 12:06 AM

That made me giggle. My kids loved the video. I miss having cats.

the kittens are so cute. as is penny. good luck on you travels. drive safely!

Thanks for having the kitties. We knew they would be well loves.

Addy LOVED seeing the kitties. Almost as if she was right with Penny playing!