Michael is getting so strong. He can push himself all the way up onto his arms and put them straight and he scoots all around the living room, turning and rolling and inching forwards. He's such a handsome little guy and totally enjoys being on the floor. 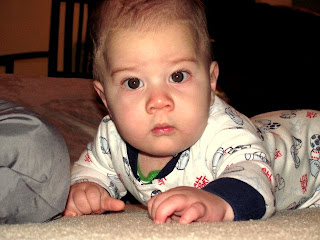 He loves this bouncy seat about as much as Penny did. He's strong enough now that he's able to pull himself up and bat at the toys. This means that I can't leave him alone in the chair anymore though, even if he's strapped in. Yesterday, he was in the chair and I was on the phone and I heard him grunt, I looked over and he had fallen over the side but was still buckled in. He wasn't crying, just voicing that he was stuck in a grunting kind of way. It was kinda humerous actually. 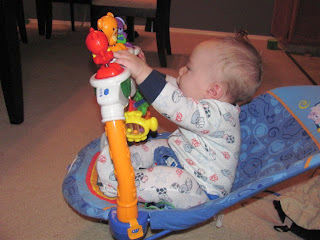 Here he is reaching for the toys. Seriously. He's getting so big. These are 12 month pajamas and almost too small. He's not even 6 months yet. I'm going to start calling him Moose Jr. after a friend of mine from back home. 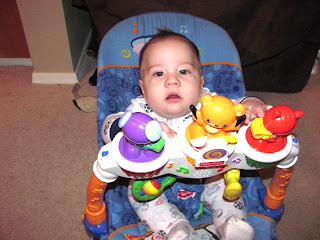 You can't call him Moose. HE looks nothing like him! :o) HAHA! 12 month size clothes??!! Sheesh girl! He's a TANK! That just means extra to squeeze on. Delish.