Penny skipped her nap a few days ago and by 4pm was tuckered out. She was sitting on this chair just babbling away in this position while I was nursing Michael on the couch. Then, all of the sudden, it was quiet. I knew immediately that she must have fallen asleep but it wasn't until I looked over that I realized she had perched herself on the chair like this. She really did look VERY comfortable. 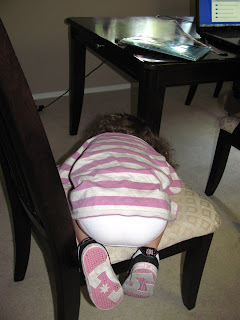 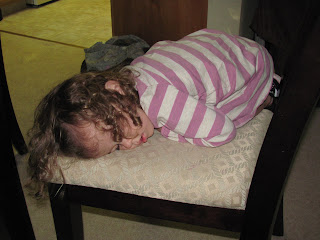 Dominic loves to hold and love on Michael. He likes it when Michael tries to eat him and ends up in fits of laughter. These two boys of mine are so good to eachother. I love seeing Michael light up when he sees Dominic, and Dominic get excited to hold Michael. They are perfect brothers like that. 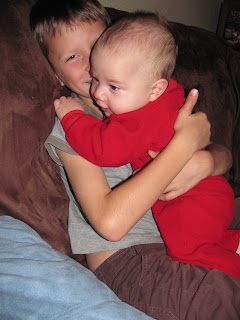 I asked Dominic what his favorite thing about Michael is and he said, "That he's cute, fat, chubby, slobbers and that he laughs."
He's always saying how he'll never trade Michael for ANYTHING, yesterday it was "not even 1,000,000 cupcakes."
Love him. 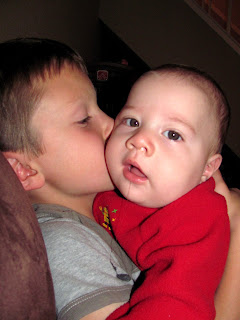 Meanwhile, Sean told me yesterday that he can't imagine ever being done having kids. He just looks at their little faces and just is smitten over and over by how much he loves these kiddos.
I told him that's a good sign that we're not done. I agree that they are lots of fun and we love being parents. We give thanks to our Heavenly Father every day for our little family.
Posted by Sean at 9:15 AM

Somehow seeing Dominic kissing Michael is what I needed to see this morning. My heart is full.

Sooo cute! Your family is adorable!

I was just telling Julia this morning that I can't wait to chew on Dylan AND Michael's cheeks in December.... 1,000,000 cupcakes has nothing on him!

Penny must get the "I can sleep anywhere" gene from Gpa Hirt or her Uncle Joe :)

...family, and you have a beautiful one.

Katie, that post touched me on such a spiritual level. I can just feel Dominic's love for Michael from here. I love how kids express their feelings, saying things like they would never trade in their siblings. It's like they muster up all they can based on the words and knowledge they have, but their feelings are just as real and deep as ours (just expressed a little differently.) And, I totally hear you about not being done having kids. I am all too familiar with the feeling. I wish more people had the perspective we do in the church that this can continue in heaven! I believe that is why raising kids is the happiest time of everyone's lives... it's a glimpse of our eternal destiny. I love sharing that connection with other women.

So cute! You are an amazing family.
I like your new blog look by the way. Especially the photos down the side. :)