Sean and his sister went to a seminar in Vegas last weekend and so we tagged along for the ride (Sean's sister and mom live in Vegas).
We had SO MUCH FUN. Though, I seriously got close to no sleep. Michael was waking up every hour because he was teething. It took me 3 nights sleep to recover. Thankfully, the tooth came through and he went back to sleeping all night again.
Grandma has a pool and hot tub and she turned the heat on just for us. It was REALLY NICE! Penny and Dominic had so much fun in the pool. Even Michael was enjoying himself (man he can kick!)
Who's eyebrows are those? 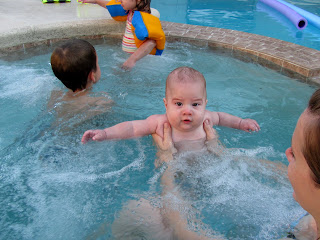 Dad was at his seminar while we were eating bon-bons by the pool. Its what I do best. 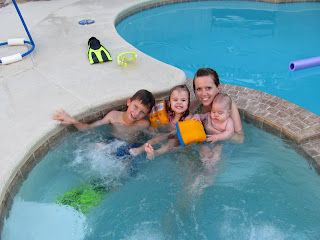 I've got to get this kid some flippers, he thinks they are the coolest things ever (he had tons of fun with Ammon and Micah over Labor Day swimming with their flippers). 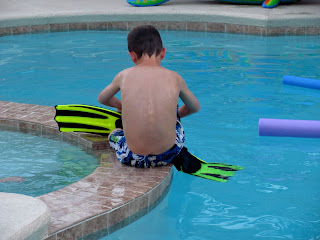 This is Beau. He is a few months older than Penny and Gma babysits him a few times a month on Sundays. They came over for the evening on Friday (Beau and his parents) He's darling and quite the ball of energy. We got them to stand still long enough to take a picture together. Grandma loves these kids. 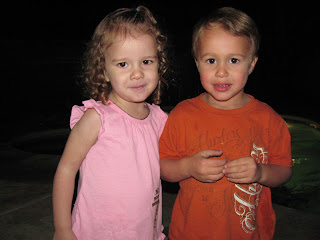 If there is anyone that Penny looks like more than her daddy, it would be Courtney. I'll take that any day, Courtney is beautiful inside and out and I love how much my kids adore her (because she adores them).
We played electronic monopoly (FUN!) and Penny was enamored with the card swiper. She wanted to put her card in and push all the buttons. 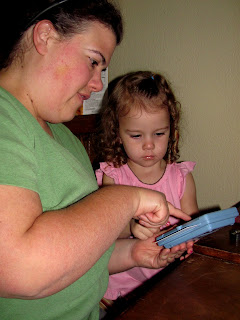 Waiting patiently for us to finish someone's turn so she can have the swiper back. Those curls are post swimming curls.....they just happened. 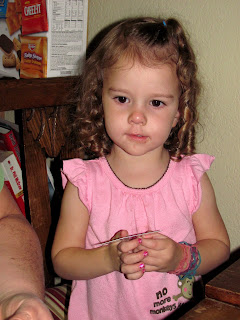 I took a picture and then put the game away so we would know where we were on the board the next day. Its too bad Monopoly takes so stinking long to play!!! 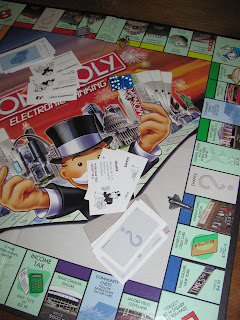 Grandma treated the kids to a Disney show at a nearby hotel theater. It was a live presentation of Mickey's magic Show. It was a lot of fun and Penny and Dominic really enjoyed it. At the end they cut someone in half....I've always been confused at how they do that.
Nephi, Mr. Checkers told you the secret a bajillion years ago and you swore not to tell...do you think you could tell now? 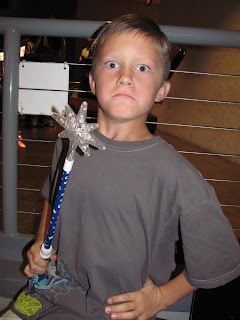 I love my little Mickey 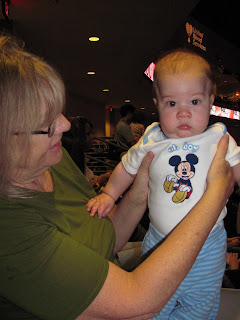 These were our seats. There was only 1 row behind us. We had a great view though! I'm sure there were people on the floor that didn't have a good a view as we had. 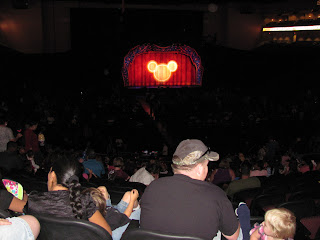 Michael sacked out HARD during the show. I actually nursed him because nobody was sitting to the side of us, we were up against a wall, and he fell asleep. He slept on Grandma for quite a while....... 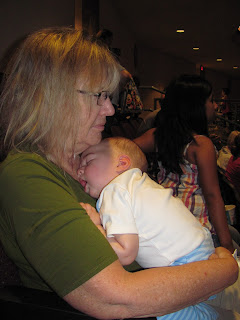 when his eyes opened, he just lay there....snuggling. So sweet. 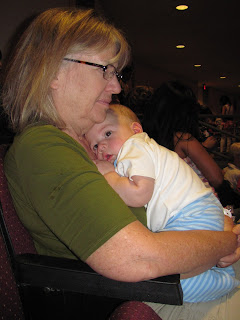 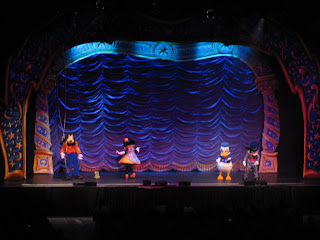 Saturday night we turned up the heat again in the pool and chillaxed. It was soooo nice. Even Sean got in. I was starting to get all "sprinkly" (as Penny calls it... for wrinkly). 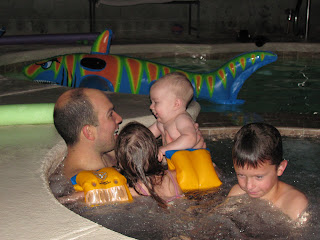 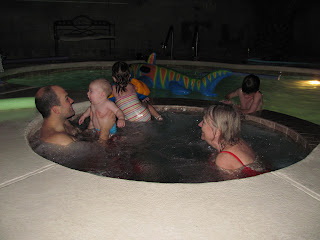 Meet Heidi. The cutest long-haired wiener dog ever. Penny was scared of her for the first few hours of us being there. Then, I guess she just decided that 12 inches of dog isn't that intimidating after all. I never thought I would say this, but I would love to get a long haired wiener dog......... Heidi is so cute to me (though I hate that she puts her wet nose on my legs all the time...lol). 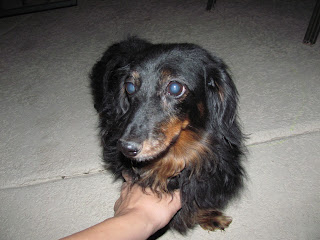 Sacked out on the way back home on Sunday. My kids watched so many Sunday movies in the car we had more church than most people do in a month! 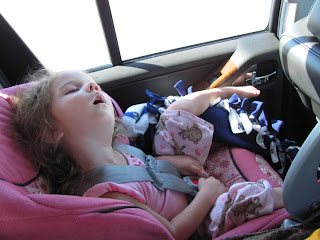 I love that little face. She looked so cute with the headphones on but every time Sean went over a bump or around a corner, they would jostle off and she would chastise Sean. So funny. 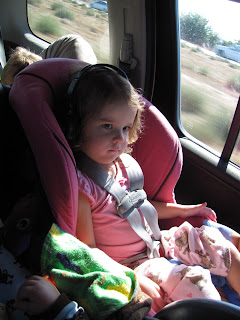 Michael is such a good traveler! He never fussed once in the car! 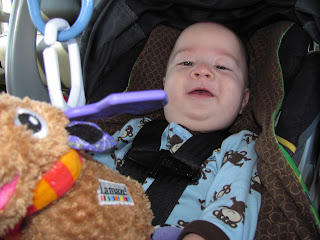 That looked like so much fun. How would that be to have your own swimming pool and hot tub? I love the picture of Micheal snuggling with his eyes open, he was too comfortable to move.

The picture of you holding Michael in the hot tub is my favorite, what a squishy, yummy looking kiddo!